I have finally finished Her Majesty (God Bless Her!), Victoria I, Empress of India, Queen of the United Kingdoms of Great Britain, etc., etc. The figure came from Eureka. 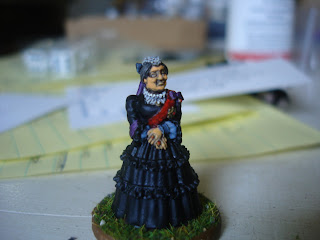 She is not amused.
Next up is Khana Reeyah, the Exalted One. The figure is a Parroom Stations miniature that has been languishing in the bin for a few years, and on the table for a year or so. Finished him up finally. His white robes are a mark of his ritual purity. The blue and gold signify his royal status and House. The golden mask is worn at all times in public. 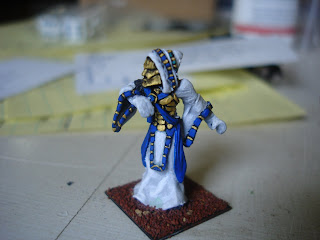 Khana Reeyah, the Exalted One
Last, I finished the last touches on a unit of Aetherbattalion in 6mm. I used Baccus British colonials and paint converted them. I mean, really, in 6mm scale, can you tell the difference? 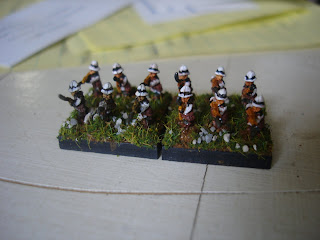 ﻿
Let me reiterate that I get no money from any of the companies that I endorse, except for The Armchair General. This is by way of full disclosure of any financial interest so no one thinks I have a financial stake in sales for any particular line of miniatures. (This notice in response to an email I received. You know who you are. You know where you can go and what you can do upon arrival.)
I just like to go internet window shopping, and pass along any neat finds via this blog. Today I am looking at some minis from Ramshackle, in the UK.
The first model I saw that loked interesting for VSF use was Archibald Trumpton. I like the tracked wheelchair. I'm not sure why, but it seems far more industrial and VSF than a traditional one would. It says, "I may not be able to walk, but your guts are going to grease my treads!" Attitude. We like it. Metal, just over $4 (US). 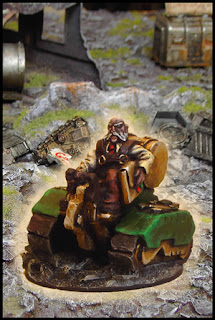 This next one is a must if you are going to have Russians. It might require a headswap for the proper feel, but other than that, I think it is awesome. Resin, it goes for about $7. It's called the Armour Bear with Ursa Major. 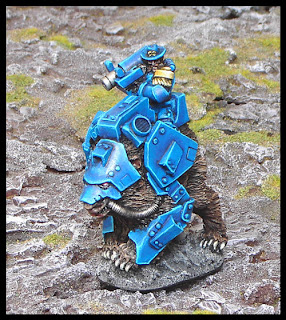 Another resin figure, good for anyone fielding automatons or battle suited infantry is the Ironstrike. My son thinks it would be great for a Papal States army - it looks kinda "Crusader" to him, and I have to agree. 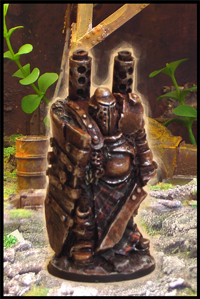 Last (for now), is Mathilda Grey. Another resin figure, she seems like she would be an excellent female mad scientist, or an assistant to an established mad scientist, like Herr Doktor Professor Otto Maton! 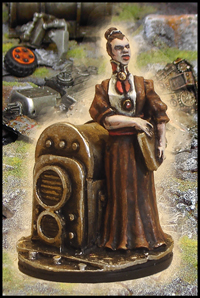 You can find it here, or by accessing the link in the left hand column.


Oh, and many thanks to the folks who helped me with submissions, especially Eli Arndt, of I See Lead People fame, who provided me with the final piece of art - a dead cool parrotman on the attack!
Posted by J Womack, Esq. at 11:14 PM No comments:

While waiting in queue at the Government office in charge of registration of vehicle operators for my nephew's, I took the opportunity to peruse the telephonic differencing network via my mobile aetheric communications device. At a favorite location of mine, I noticed a posting regarding a new manufacturer of weapons and equipment for Her Majesty's naval and aeronaval forces: Grand Manner.
They have on offer a variety of pieces, and they look quite well made. These include:
Grand Manner also apparently has a shipyard I was unaware of, and are creating several ships (look in their network catalog in the "Sudan" section). They look quite nice, if pricey. If they come pre-painted and assembled, they seem like good value for the money. 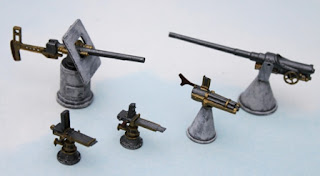 Additional models of armoured vehicles have been sighted at the Proxie Engineworks grounds. These join the previously mentioned Proxie-Trencher Armoured Military Tractor. 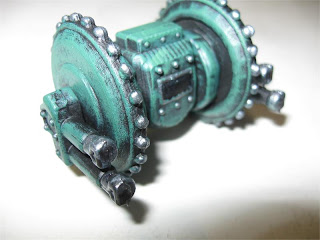 Proxie-"Roller"
Proxie built this unusual design hoping to increase the speed and mobility of an armoured vehicle. The two large wheels spin independently, making the vehicle incredibly agile. However, rumour has it that the system is 'delicate' and therefore still requires more development before an acceptable model will be purchased by Government. 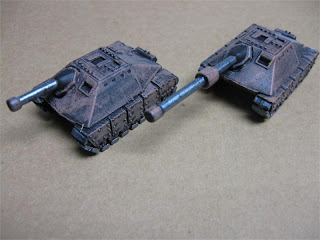 Proxie-Stalker
The Proxie-Stalker model vehicle is a simpler prototype. The lack of a turret makes for faster and simpler construction, thus making it less expensive. The heavily sloped armour is expected to make enemy artillery shells glance off as well, leaving the crew unharmed. The Proxie company offers this design with two different cannons: a short barreled 9 pdr. and a long barreled 6 pdr.
﻿
Posted by J Womack, Esq. at 9:25 AM No comments:

Just been doing a bit of cleanup around here. Deleting old links, adding a few nifty features, that sort of thing. I'll be trying to post something new every other day or so for the next few weeks, at least on average.
Things that have me busy right now:
So not so bad, after all.
Posted by J Womack, Esq. at 12:47 PM 1 comment:

Mrs. Gertrude Hillingbotham, 89, of Lower West Whinging, Surrey, has told the Times that Saturday last she was nearly trampled by young men ahorse. While such things may not be uncommon during a rousing foxhunt, these young men were in the uniform of Her Majesty's cavalry. And armed with, of all things, a heavy lance!
"What struck me as odd was the device at the end of the lance," complained Mrs. Hillingbotham. "Mister Hillingbotham was in the cavalry, you know, under the old King. You know, the German one, against the Corsican Ogre. And he certainly never carried any such nonsense when he was in service! My goodness, the very idea!"
We immediately dispatched a reporter to obtain more information, but were pulled up short by the Horse Guards and a quote of the State Secrets and Treasons Act. More information about these men can probably be found here.
[Editor's Note: Colonel Gravis has made his Praetorian Rough Riders conversions available for sale. He does not have too many sets ready at the moment, so you may want to jump on it. I can foresee a purchase, but not at the moment. I'll be taking ten, eventually, to make up the cavalry portion of the Research Platoon. Heck, I already have the walkers!]
Posted by J Womack, Esq. at 3:34 AM No comments:

In case you don't already follow this gentleman's efforts in walker construction, you should jump over to Colonel O'Truth's electrostatic journal and catch up on the developpment of HMSW Gargantua. This, my friends, is the standard to which we should all aspire.
Colonel O'Truth's Miniature Issues: Rivets and bolts can drive you nuts!: "Hi, All. So here I am again, after another fortnight of tiny rivets and glue fumes... HMSW Gargantua is really taking shape now, alt..."
Posted by J Womack, Esq. at 3:17 PM No comments: