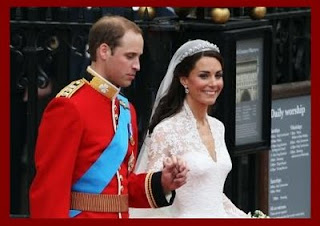 Anyone who follows this blog has probably figured out that I am an unapologetic Anglophile. Perhaps it should be a Britophile, as I do not reserve my affection solely for the English, but include Irish, Scots and Welsh as well.
However, as a latter-day Loyalist, I wish to express my happiness at the wedding of HRH Prince William and HRH Princess Catherine. May they share many years of wedded bliss.
Posted by J Womack, Esq. at 2:45 PM 4 comments:

Fresh from the Kaiser's favorite fabrikwerks, the massive Zyklops class trundles forth to crush any resistance to his Imperial will! 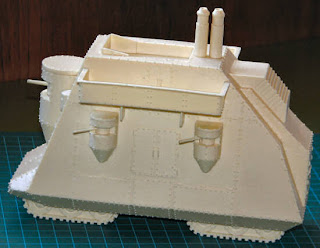 The Zyklops is the first capital unit in production for the When the Navy Walked game. Technically scaled for 15mm, I am thinking it would still work as a truly massive land dreadnought for my 6mm project. ther is very little I like better than the ability to cut across scales, saving me time, money and paint!

It is available for sale through JTFM Enterprises, for C$35, a little more in USD.

Last of the Warmachine Thoughts

At least for now.


A few years ago, Privateer Press and Gale Force Nine worked together to produce some impressive prepainted and ready out-of-the-box terrain pieces for the Warmachine game. I don't know what happened, but they have stopped working together and the pieces are no longer in production. However, you can get them from the secondary market. 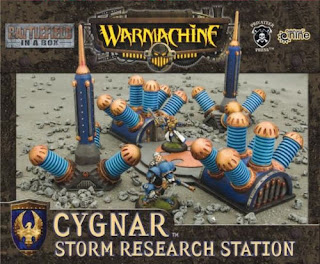 The Storm Research Station seems to be a good choice for anyone fielding a mad science or automaton force. That was always what I wanted it for, at any rate. 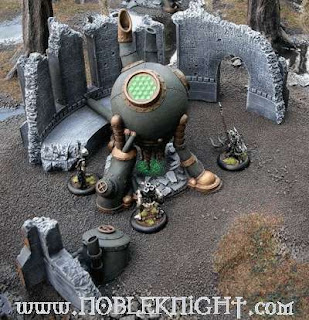 For the most part, I don't like the Cryx faction. But this piece screams to me for use as the 'handwavium'-fueled power reactor for an entire settlement or fort. An awesome objective piece of terrain.﻿ "The generators will be down momentarily. You may commence your assault." 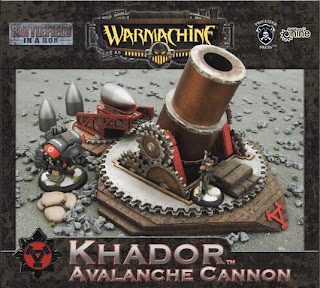 The last piece here is a massive cannon. Really big. Good for a Verne Cannon in VSF. Again, primarily a piece of objective terrain. I have a different version made by JR Miniatures, if I remember correctly. Much less expensive, if not as nice.﻿
Posted by J Womack, Esq. at 1:11 AM No comments:

Christ is risen!
Family, friends, food, fun... I hope your Easter includes these all. but always remember the reason for the joy: our Lord and Savior has conquered death and sin for us.
We'll see you tomorrow!
Posted by J Womack, Esq. at 1:43 AM No comments:

Yesterday I mentioned looking through Privateer Press's Warmachine minis online. Well, I wanted to bring a particular piece to your attention: the Cygnar faction's massive "battle engine", the Storm Strider. 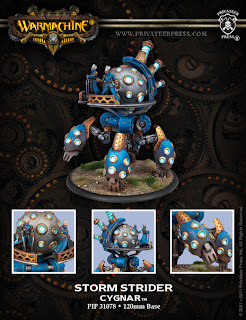 Photo from Privateer Press Website (used w/o permission)
By 'massive,' I mean you should consider that the base is 120mm in diameter. The size of a CD. BIG. the pricetag is commensuratingly big: $89.99. But this is one big hunk of lead, and sure to dominate any battlefield.
The other factions also have battle engines, but the Khador one is the only other one that just seems very VSF to me. It is known as the "Gun Carriage". 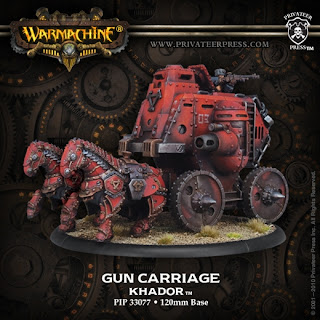 Now, some of you out there may be put off by the horse-drawn nature of the vehicle. But, you could perhaps swap these horses for the steam-horses made by Mage Knight and mentioned elsewhere. Then you would have a mechanickal and steam-powered motive force.
Posted by J Womack, Esq. at 9:56 PM No comments:

I was perusing the Privateer Press website, looking at some of their Warmachine models, and considering their usefulness for my VSF games. There are some nice things there, if a bit pricey. I took a peek at the Cryx faction, which I generally don't care for, as a matter of personal taste. But I saw the figures below (picture from the website) and it got me thinking about a horror aspect to VSF gaming. 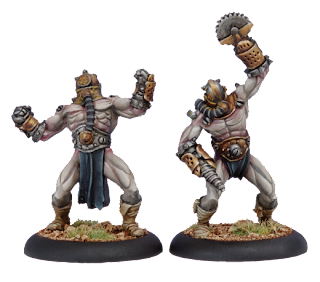 I originally was looking at the Cryx for possible experimentl subjects for Doctor Vardu, the mad scientist operating secretly out of Venusstaadt IMVSF. Thinking something like Frankenstein's monster or Reanimator - life from death, that sort of thing. I saw these "Drudge Mind Slaves", and thought they looked more like a horrifying mechanical zombie experiment sort of thing. Beyond mere mad science and into true horror, you see.
While it is not an aspect that I think I will be pursuing, I though it an idea worth mentioning here.
Posted by J Womack, Esq. at 9:37 AM No comments:

Texicans Celebrate
Today is the 49th anniversary of the Battle of San Jacinto, in which the valiant Texican army, outnumbered and ill-equipped, surprised and defeated the invading Mexican Army, led by the despot Antonio Lopez de Santa Anna. In a mere eighteen minutes, spurred by their anger over the massacres at Goliad and the Alamo, the Texicans swept the Mexicans from the field.
Later that day, General Santa Anna was captured and signed the Treaties of Velasco, recognizing (in his capacity as President of Mexico) the independence of the Republic of Texas.
Expect a large crowd outside the Texas Legation here in Victoria Landing, enjoying a feast of traditional Texican foods, such as barbecued beef, beans, chilis, and of course, large quantities of beer, whiskey and cider. Fireworks will follow after sunset.
Posted by J Womack, Esq. at 1:38 AM 3 comments:

Just a few quick photos of a few things that I finally got finished. 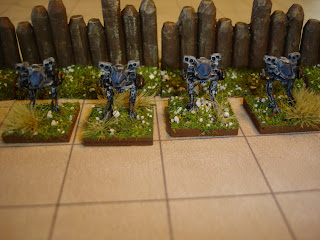 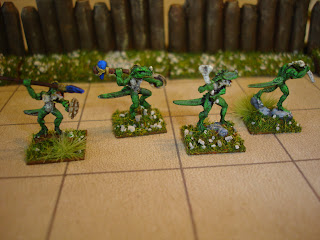 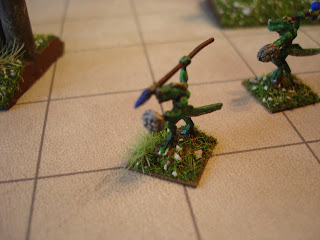 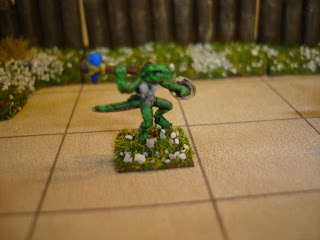 Charges to Glory, a reptilian hunter 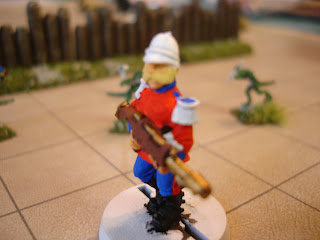 This is a head swap I have been working on. I have never done one before, so this is an interesting project. The head comes from Black Pyramid's Tea Wars line. I have about ten more, quite nice. The body is a Mordian. Much cheaper on eBay than Praetorians. 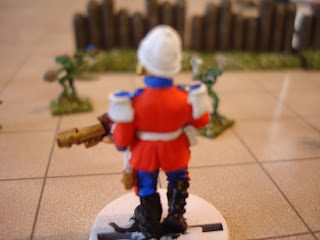 Just a few shots from the Sky Galleons of Mars Yahoo Group, for inspiration and utter cool factor. If you like VSF airships, aeronefs, or Space 1889, you'll like this. 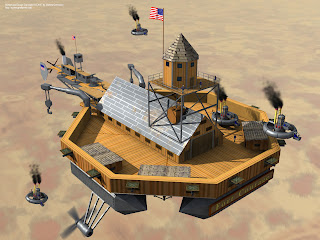 The Cavalry X-Disk, an Aerial Conveyance
Posted by J Womack, Esq. at 7:02 PM No comments:

Just something I thought was really neat!

The Gaal, Savage Birdmen of Mars 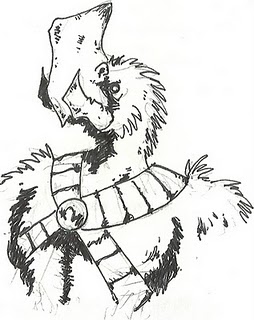 The Gaal are a fierce race of bird-like humanoids inhabiting the Red Planet of the universe of When the Navy Walked. Look for them to appear in the upcoming supplement for the game: Conflict on Mars. The artwork is by another friend, Eli Arndt.
Posted by J Womack, Esq. at 5:46 PM 2 comments:

well, we weren't but now we are.

My grandmother is 100 years old today.

If you are into VSF, you probably have some British troops. And most of you are making special characters at least from Games Workshop's Warhammer 40K Imperial Guard Praetorians. I know you are, because you are driving the cost of the things up on eBay, curse you all!
Anyway, now that sanity has returned (thank God for modern pharmaceuticals, right?), le tme point you in the direction of a fellow over in the UK that does some absolutely marvelous work with Praetorians. I mean, it's really great stuff. I am planning on ripping off his ideas left, right and center as I get around to certain projects.
That man is Colonel Gravis, commander of the 4th Praetorian Foot. You can find his work here.
As an example, please see the photo I lifted (without asking - sorry, Colonel!) from his journals: 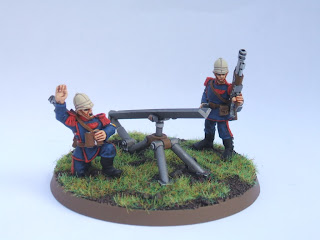 A Praetorian Rocket Trough
Posted by J Womack, Esq. at 1:41 AM 1 comment:

Shutting Down the Blog

Well, folks, it's been fun, but as of today, I will no longer be supporting this blog. Only 37 followers after what, three and a half years? Time to call it quits. I'll leave it open for those that care to check out the archives.

See you on TMP and I See Lead People.