Available from Recreational Conflicts. All metal, $10 each or 5 for $45. Screaming VSF Powersuit, Aetherarmor, or even diabolical automaton. REally giant for use with 15mm, too.

I think I will be checking into these after Historicon - once I see how much of my stash is left.
Posted by J Womack, Esq. at 10:20 PM 1 comment:

Well, I have gotten all of the foot painted to date rebased. I like the new, smaller bases much better. As it now stands, each base represents a company of infantry, with four stands to the battalion. For the Prussians, this means that it will take twelve stands per regiment. I figure I want at least a brigade, preferably an entire division of troops. A division would be best because that brings in attached cavalry regiments.
Prussian Infantry Regiment
I and II Battalions in line, Fusilier Battalion in column between.
Speaking of cavalry regiments, I decided that the fellows riding in the boring machines would be dragoons. So I'll be painting up some infantry as dragoons, but just four bases.
I'm also going to use some Baccus colonial British to emulate Aetherbattalion. I think I will only do one battalion's worth, though. I might do a full regiment, but that would be the limit. In 6mm, the only details you notice are the helmets anyway. Color will do for the rest.
And the walkers are officially Kurrassieren. And the FT-17s will be Hussars, as will the motorcycle- (excuse me, velocipede-) mounted troops. Still have the regiment of Uhlans, too. Need to put together my regiment of Jagers. And get more artillery. A division would have 12 batteries of field artillery. I only have four! I also need another pair of FT-17s.
Two Renault FT-17s, doing service in a Prussian Hussars Regiment
As for the British, I haven't gotten much. I have enough to do three battalions of Highlanders. I will probably do one for Mars and two for Earth/Venus/Earthin. I need to get additional troops, preferably marching ones. I like those poses a lot for stand based gaming. One more thing to add to the Historicon shopping list, I suppose.
Last thought for now: in future, I am going to be adding a rare earth magnet into the base of the figures. That way I can put them on small metal movement trays to speed up play.
Posted by J Womack, Esq. at 4:33 AM 1 comment:

With only a few weeks to go before Race Day, the Emerald Racing team has finished work on their first scudder. You can see photostats of the racer being put through time trials below.

[Editor's Note: This is the Skyrunners racing game craft I bought at Historicon last year. I plan on using it as a light airship in wargaming as well. It is made by Parroom Station, and can be had via Brigade Games. I came in third last year using one of Bob Charrette's scudders. I hope that my own racer will move a bit faster, turn a bit tighter, and avoid doing quite so much swooping up and down, thus earning the nickname "Vomit Comet."]
Posted by J Womack, Esq. at 4:26 AM 2 comments:

The Horse Guards has approved issue of a new uniform for British troops bound for the tropical jungle climate of Venus. Officially designated as the Cytherean Pattern uniform, the color is not the traditional redcoat for Tommy Atkins. Instead, the cloth is specially treated cotton, which refuses to take further dyeing, and remains a drab khaki color. However, the special treatment of the fabric does enabloe it to withstand the rigors of the Cytherean jungle, and it is estimated that the uniforms will last a full three times longer than current issue on Venus. The savings in shipping costs alone will pay for the new issue.
Below, you can see a few examples of the new uniform as it is being tried out in the field for the first time.

Officer's Kit
NCO and Other Ranks
As you can see, the uniform seems to be wearing well. Troops have also appreciated the cooler aspect of the light cotton cloth as compared to the usual tunic. Officers have commented that the khaki color actually is better suited to aiding in concealment on the Veiled Planet, though why any of our stout boys need to conceal themselves is quite beyond this journalist!
[Editor's Note: These are some Old Glory (I think) 25s that I bought, already painted, along with some other items from eBay. They have been sitting collecting dust for over a year until I decided that they might work on Venus, if not on Earth or Mars, where the redcoat still identifies one as a British soldier of the Queen. All I have done is add some stuff to the bases to match my other Cytherean troops of the German, Lizardman and Varduvian varieties.]
Posted by J Womack, Esq. at 4:26 PM No comments:

Progress on the HMSW Gargantua

Colonel O'Truth has been a very busy man, working on a second - and much larger - walker. The engine is complete now, and he's posted photos of his progress. You can see one here, but for the rest, you'll need to go to his blog
.
Posted by J Womack, Esq. at 2:15 PM 2 comments:

I need about three more pages worth of material to finish the next issue. If you have anything, please, let me know!

The ArmChair General: WTNW - The Emperor's Siege Pogoda
Posted by J Womack, Esq. at 9:56 AM No comments:

If you were not aware, Highlander Studios is working with Frank Chadwick to provide a new line of Space 1889 figures in 15mm. This is HUGE news for me and the VSF community in general. Roderick Campbell is sculpting them, and has put a few preview photos up on his blog, which you, dear reader, can access by clicking here.
Having looked them over, I thought I would share a few thoughts. The opinions are my own, and worth what you paid for them.
In all, I would probably not buy the British soldier shown, because of the gasmask. Other than that, it is a very nice figure, and I would be interested in non-masked versions. Go ahead and mark me down for the adventurer pack. Still looking forward (eagerly!) to the Kraag Martians.
So, if Frank or Roderick are out there, listening, here are my requests, in order of preference:
Posted by J Womack, Esq. at 3:31 PM 4 comments:

The Research Platoon Finished at last!

Well, virtually finished. All that is left is some touch-up work on the flame-projectionist. For those of you that haven't been following this blog for years, the Research Platoon is attached to the Research and Development Department of the Royal Artillery. They are the brave chaps who actually carry the sometimes temperamental devices invented by the boffins in the labs out for actual field service. All in Her Majesty's Service, of course. And the extra hazardous duty pay doesn't hurt recruitment, either. 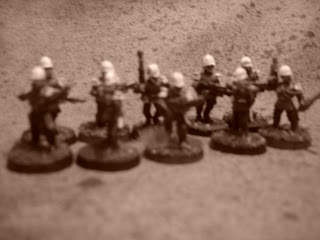 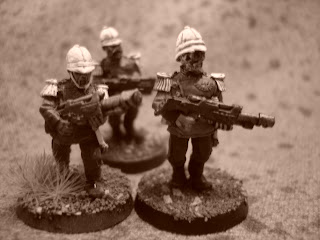 At any rate, the establishment is ten men, including one officer, an NCO, and eight other ranks. The men are primarily armed with a Photon Emission Rifle, though you will often find someone armed with more exotic fare: a portable Congreve Launcher, a Flame Projector, and a Caloric Ray Emitter.
Posted by J Womack, Esq. at 5:55 PM No comments:

I really like Foundry's models, in general. I really do. I just think they tend to be a bit too pricey. However, there are a few new packs that I am extremely tempted to purchase for my VSF games. 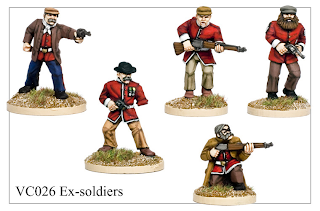 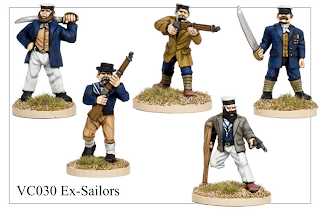 [Photos from Foundry website. Used w/o permission. If you own the rights and wish me to remove, just let me know.]
These figures just shout to be used as character models, armed civilians, that sort of thing. The other new packs (some have been out for a bit, but still...) also include constables, merchants, gentlemen and ladies, street urchins, ne'er-do-wells and "women of negotiable virtue." Most of them are equally useful, and I am considering the armed constables especially. Mix in some of the VSF types from Lead Adventure, and they would make a good unit for defending Her Majesty's property.
Posted by J Womack, Esq. at 1:55 PM 1 comment: 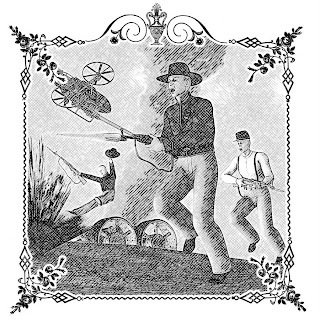 Americans at the Charge! 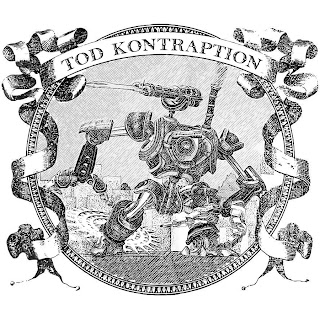 For Fans of Aerial Warfare

Here is an interesting telephonic connection location to peruse: Dirigibles and Dreadnoughts. While it is sadly not a very active sort of place, there are some lovely things to see there. For example, this German torpedo cruiser, built by the owner of the site: 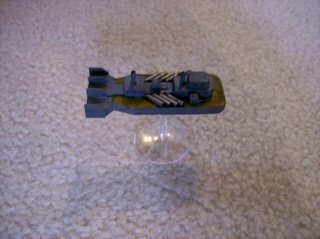 Odd sort of cloud cover below that cruiser, what?
Posted by J Womack, Esq. at 12:56 AM No comments: