Zeppelin (n.): a rigid cylindrical airship consisting of a covered frame containing multiple gas cells, and with a suspended compartment for passengers and engines. 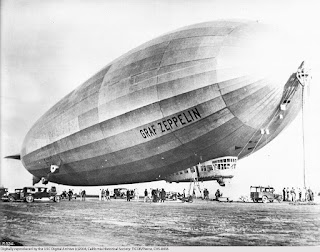 There was, of course, no way not to mention the Zeppelin and other forms of flying ships when discussing Victorian Science Fiction. You may as well leave out Her Majesty (God Bless Her!) as flying vessels! The idea of flying ships was written about by Victorian writers (Jules Verne published Master of the World in 1904, just a few years after Edward took the throne).

Graf Ferdinand von Zeppelin started designing the style of airship which would bear his name in the 1870s after seeing airships used by the Union in the American Civil War and the French during the short-lived Franco-Prussian War. The first real zeppelin (LZ-1) was built in 1899. Zeppelins were used as bombers in World War I and as commercial vehicles after the war until the Hindenberg crash in 1937 ended their popularity. (Oh, the humanity!) In my VSF universe, I have Zeppelin retiring from the military at a younger age due to injuries sustained, and getting into the development of airships sooner as a result. Zeppelins fitted with more powerful engines and using a wondrous lifting gas (hydrium, an idea copied from Kenneth Opel's Airborn novels) are commonplace in the late 19th century of my little universe.

Besides zeppelins, which are just really cool, the VSF enthusiast has a variety of airships to choose from. Most use some for of lighter-than-air technology, which is often non-gaseous in nature, thus eliminating the need for huge gas bags to provide lift. Liftwood, cavorite, and unobtainite are some examples of this. The problem with massive gas cells is that they are, well, massive. Big, relatively slow targets, which can't be significantly armoured due to weight considerations. Using liftwood, etc., eliminates that liability and makes armoured airships much more practical.

Some airships are small gunboats, intended to swiftly enforce the will of the Great Powers which build them. The British Naval Air Service's ubiquitous Aphid-class is a prime example of this type. Others are massive behemoths of armourplate and turreted 14" naval guns, bristling with batteries of quick-firing light guns, and cruising slowly through the air, dominating the sky. The Class IV dreadnought is one of these types of airship.


I know of several good rules sets that exist for VSF airship fleet battles, in alphabetical order:
I have played in games using all of the above rules except for Dystopian Wars, and enjoyed them all. Except for When Dreadnoughts Ruled the Skies, all of them also have associated ground forces rules suitable for playing air-to-ground engagements and mixed actions. If I have inadvertently left any systems you are aware of out of the above list, please let me know and I will be happy to add it!

Well done for finishing the A to Z challenge mate!

Holy River Iss! I forgot to mention the 8th ray! You know, the ray that is kept in the bouyancy tanks of Barsoomian fliers which provides them with their lift?

I hope the assassins aren't sent after m...