Work in Progress, but no photos

Due to the restrictions of the Lead Painters' League competition, I am not able to show the work currently in progress. However, I am working on several projects which are tied to Victorian Science Fiction right now, including some additions to Professor Maton's 28mm forces, and two factions for Empire of the Dead. I can't say more right now for fear that I would be disqualified from competition. Between the LPL and graduate school, there is little time left for other gaming pursuits. I have managed to get in another game of In Her Majesty's Name (Lizardmen vs. Lord Curr, and I won!), and I have received an interesting Adventuring Company to include in the next issue of The Aethergraph, which I still hope to release sometime in May. Probably about the middle of the month, once my school semester is done.

I did spend some time cleaning up and reorganizing my Man Cave, after the memsahib threatened to let our cleaning lady loose to discard whatever she thought was trash. Naturally, I spent a few hours in panicked attack on the room. I found that I have literally hundreds of minis - possibly thousands, honestly - just sitting about, doing nothing. I know that shocks you. I shall soon get a list together of items that need a new home, many of them non-VSF.

And, since I can't show you any photos of the minis I am working on, I thought I would share a few shots of the IHMN game Zach and I played the other day. 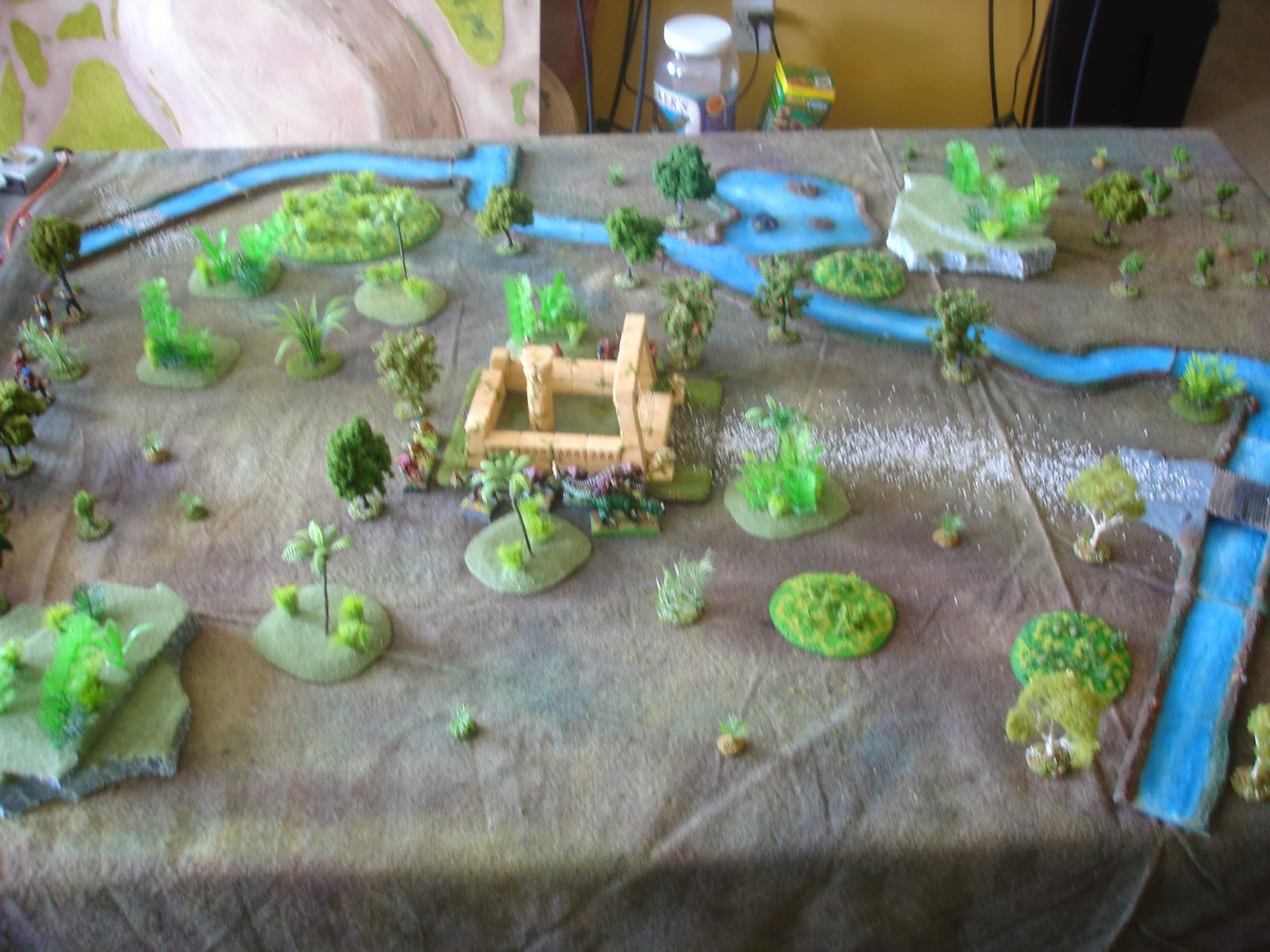 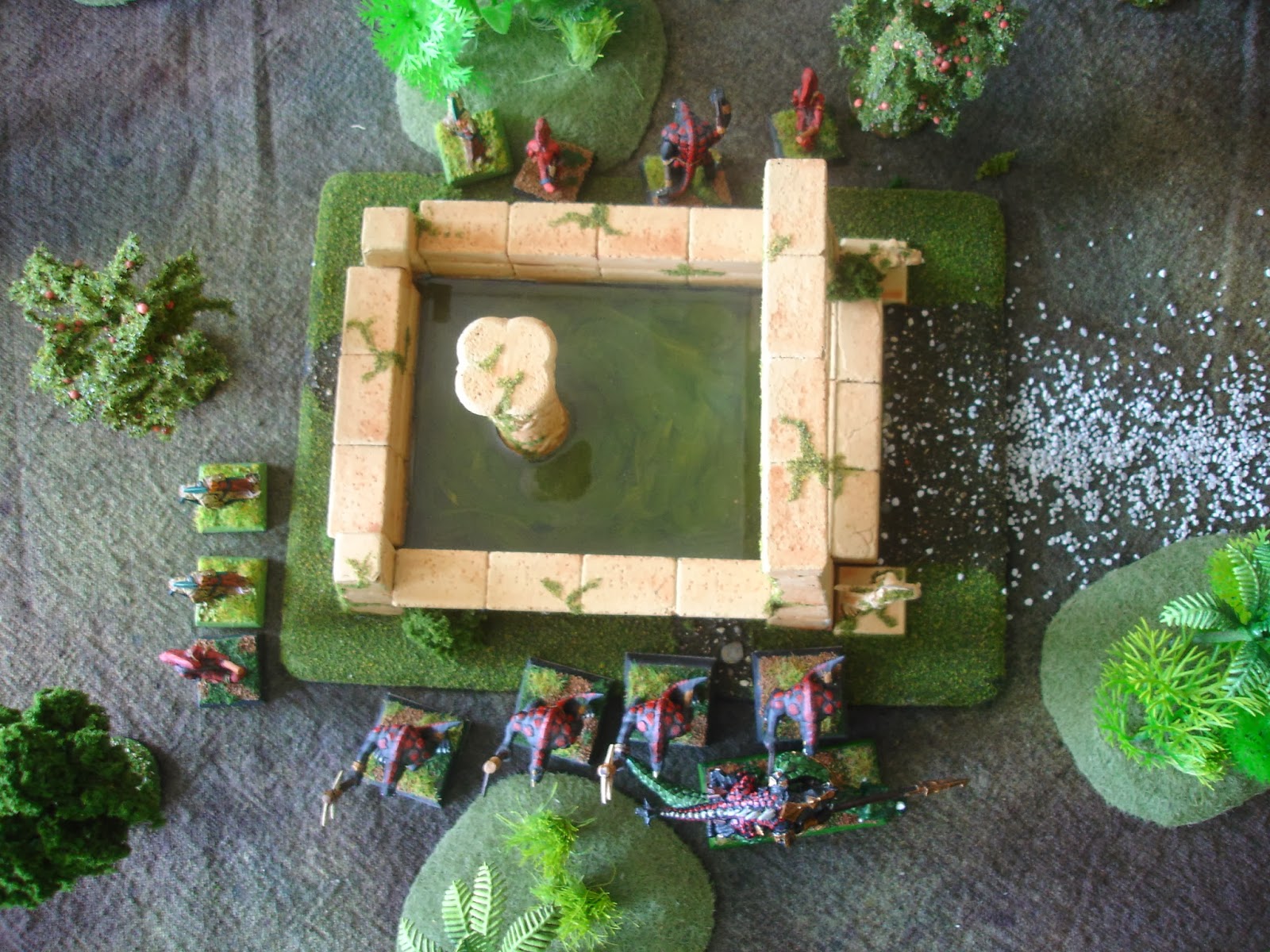 Lizardmen Defensive Perimeter. The scenario required them to defend the pool. 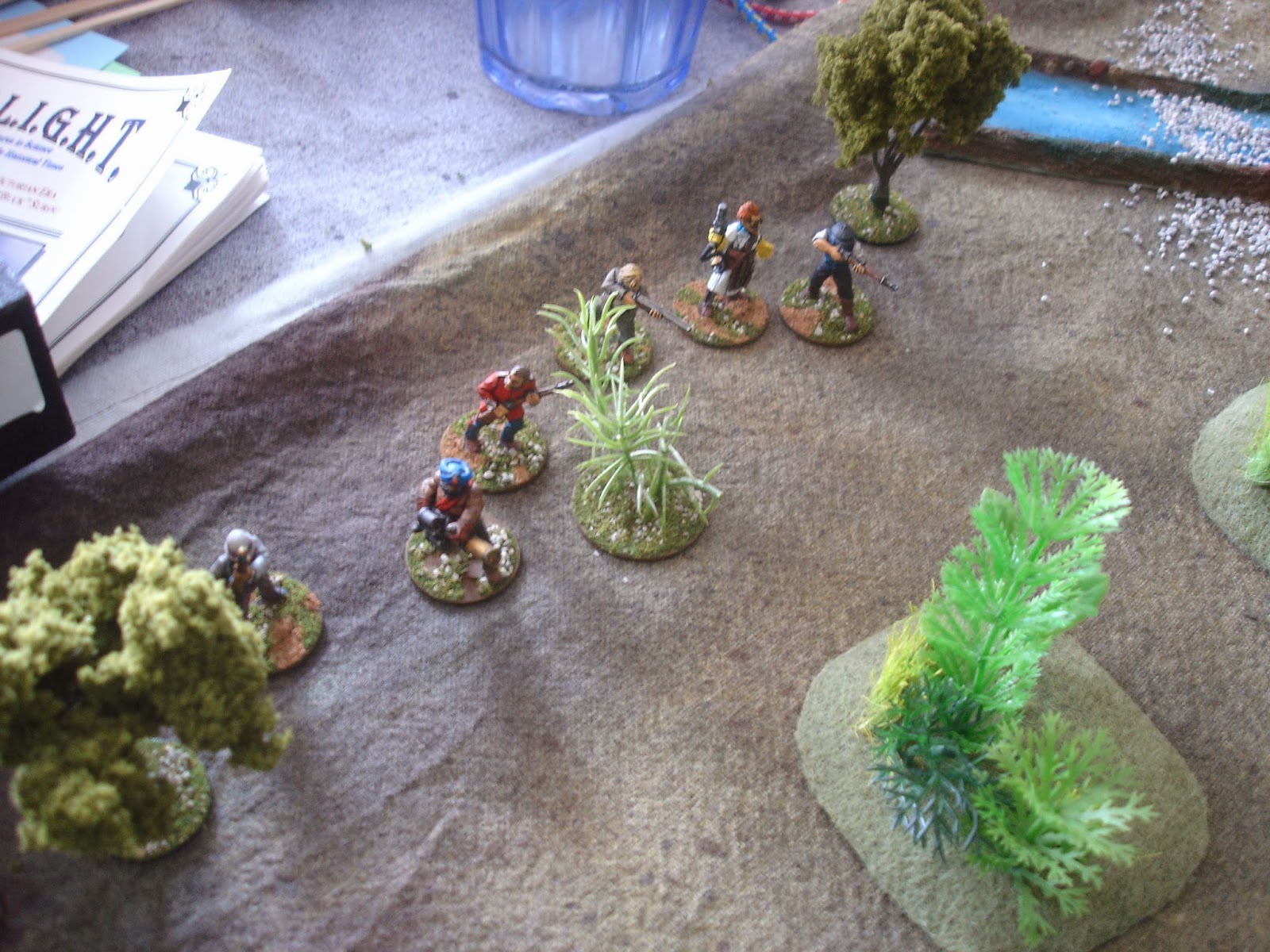 The Imperial German governor of Venusstaadt has announced the arrival of a new agricultural walker, the Holzfallermaschinen (Lumberjack Machine). Originally designed to assist in the clearance of the dense jungle terrain in Germany's tropical colonies on Earth, the Holzfallermaschinen carries a large buzzsaw, a pincer claw, and a flamesprayer. It's steel shell is tough to withstand falling debris from trees it is clearing. The clanking monstrosity of machinery is perfect for slash-and-burn land clearance, able to clear several acres of dense jungle foliage in a single day.

When military emergency arises (as so often happens), the tough "Holz" has been fitted with a machinegun by the Imperial Army and sent off to fight for the Kaiser. 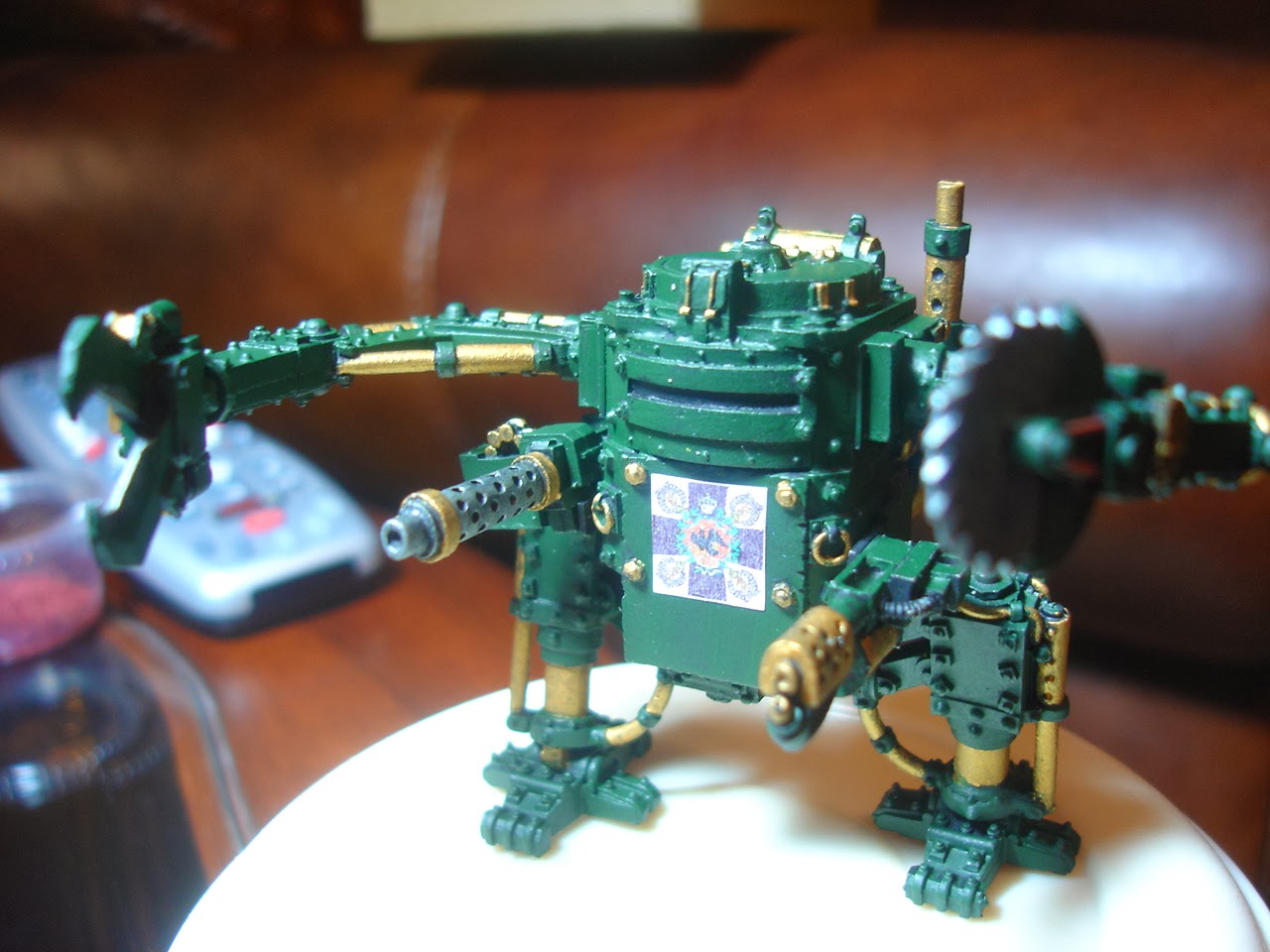 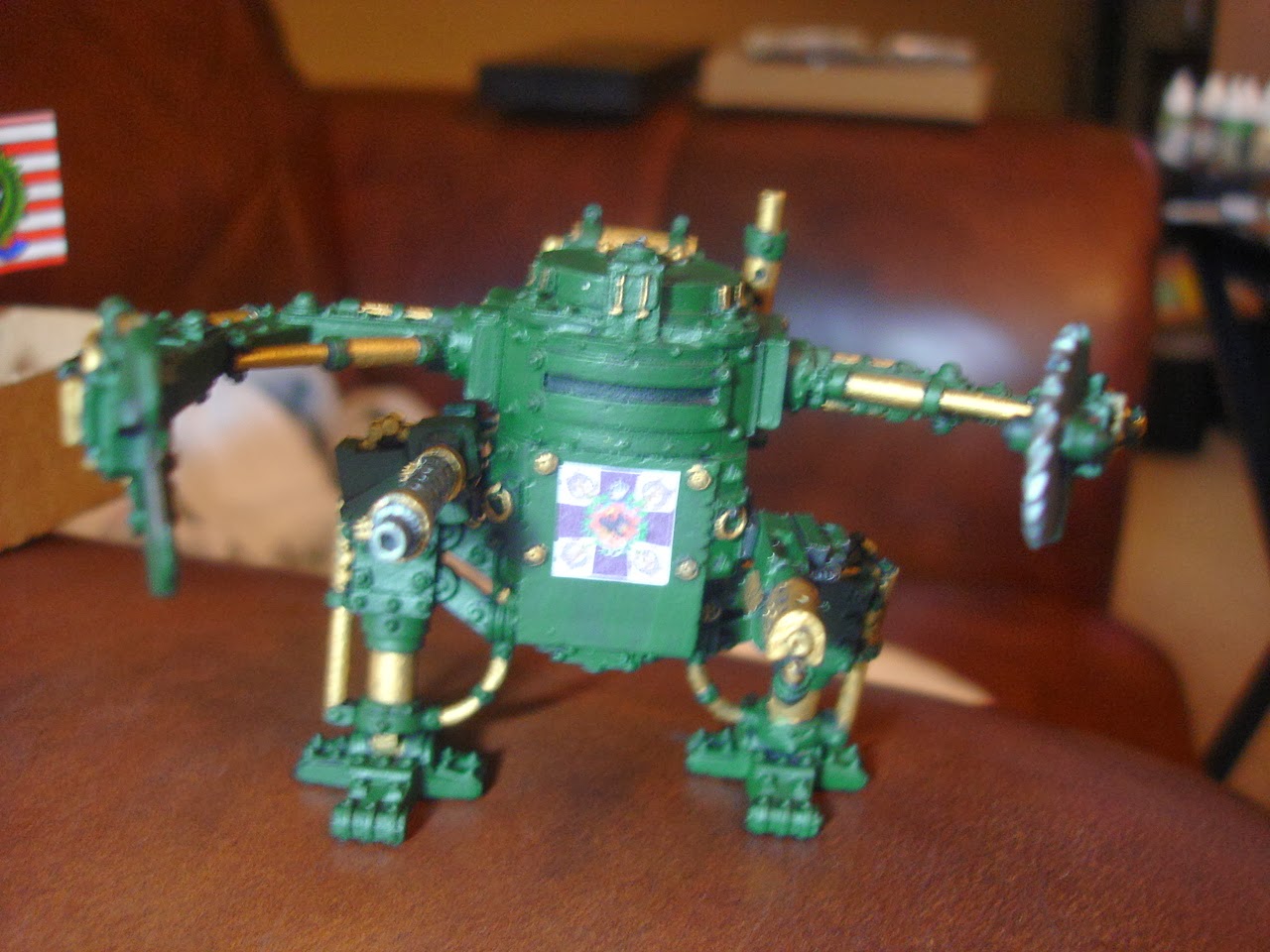 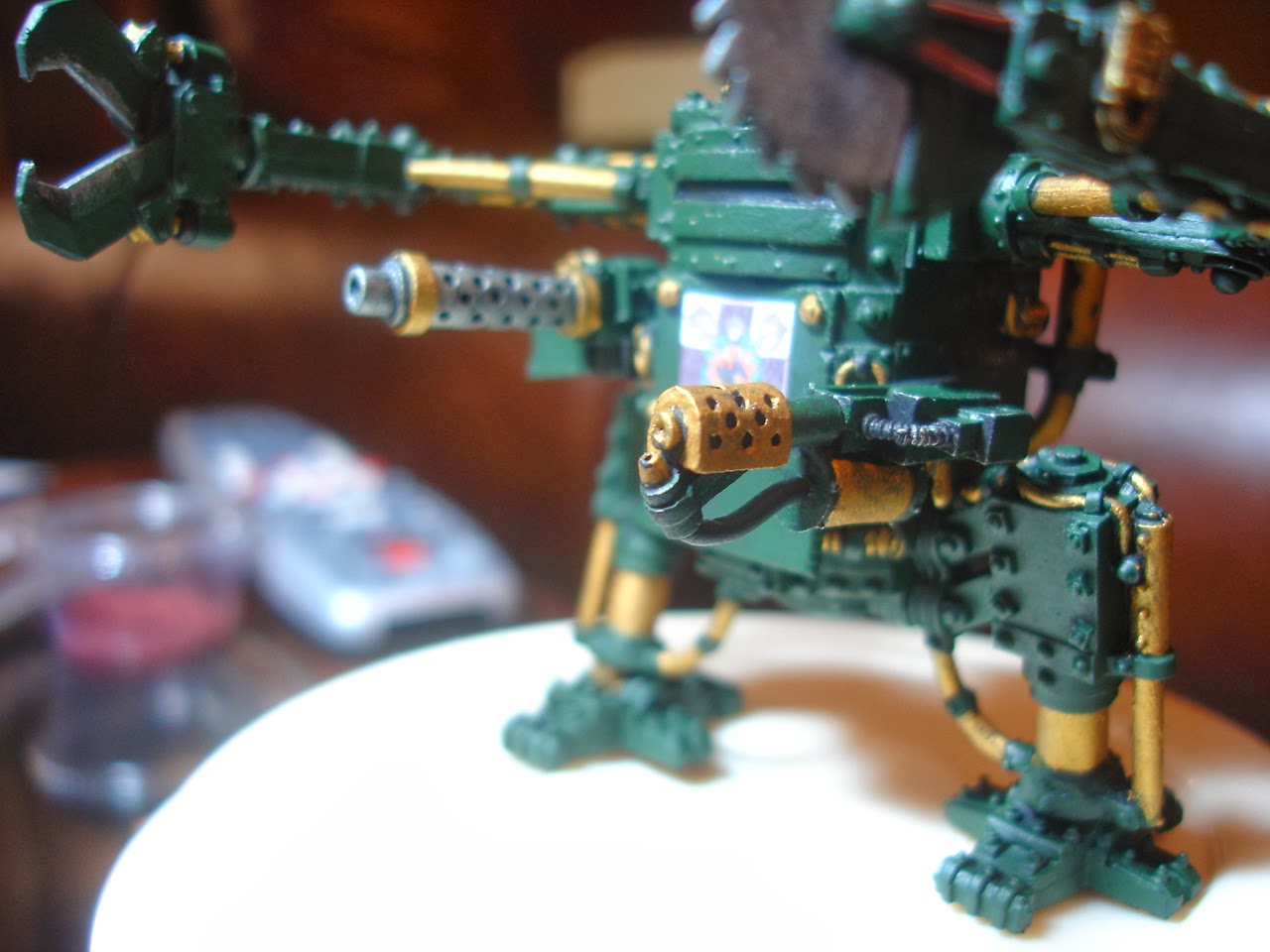 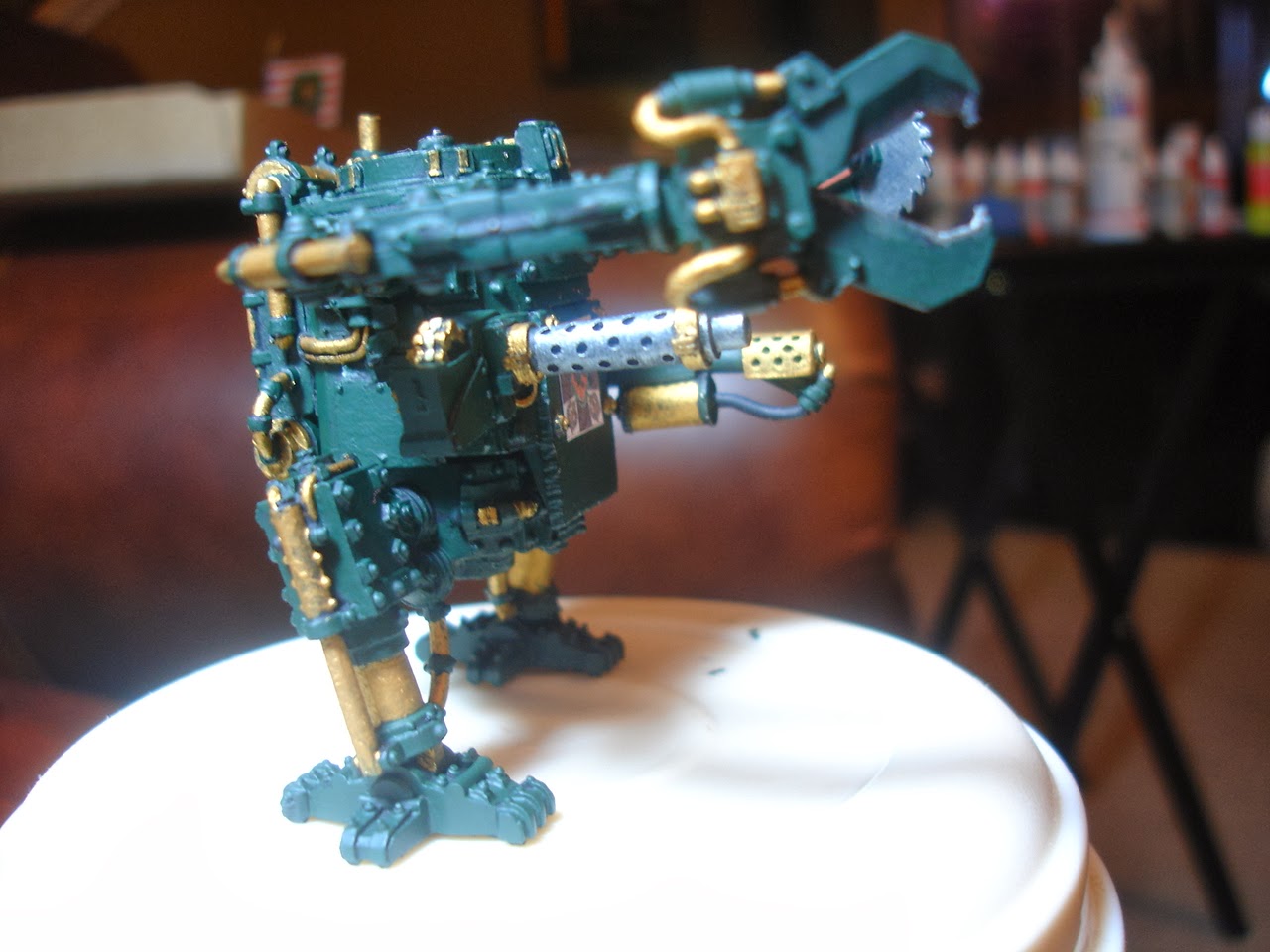 [Editor's Notes: The Holz is obviously a Games Workshop 40K Ork dreadnought. From the early 2000s, I think. All metal, I purchased it at Historicon in the flea market last summer. $8, if I recall correctly.]
Posted by J Womack, Esq. at 1:00 AM 2 comments:

The French landship is completed, after receipt of replacement starboard drive units. Also, tricolors and a personalization icon have been added. The cock is the symbol of French athletics, in this case, the French National Rugby Football team (better known as Les Bleus). I think I will call this little scout ship Les Bleus. 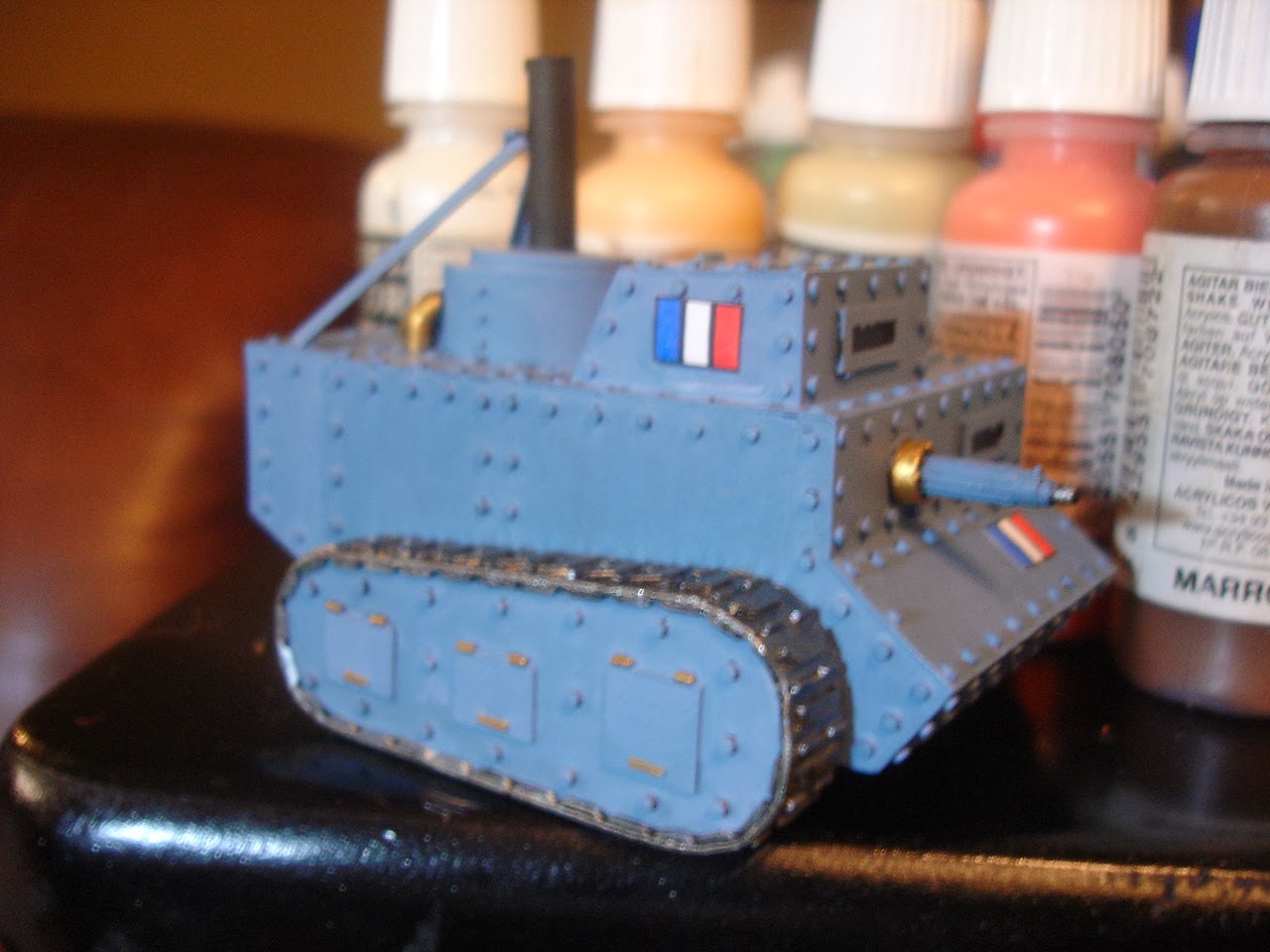 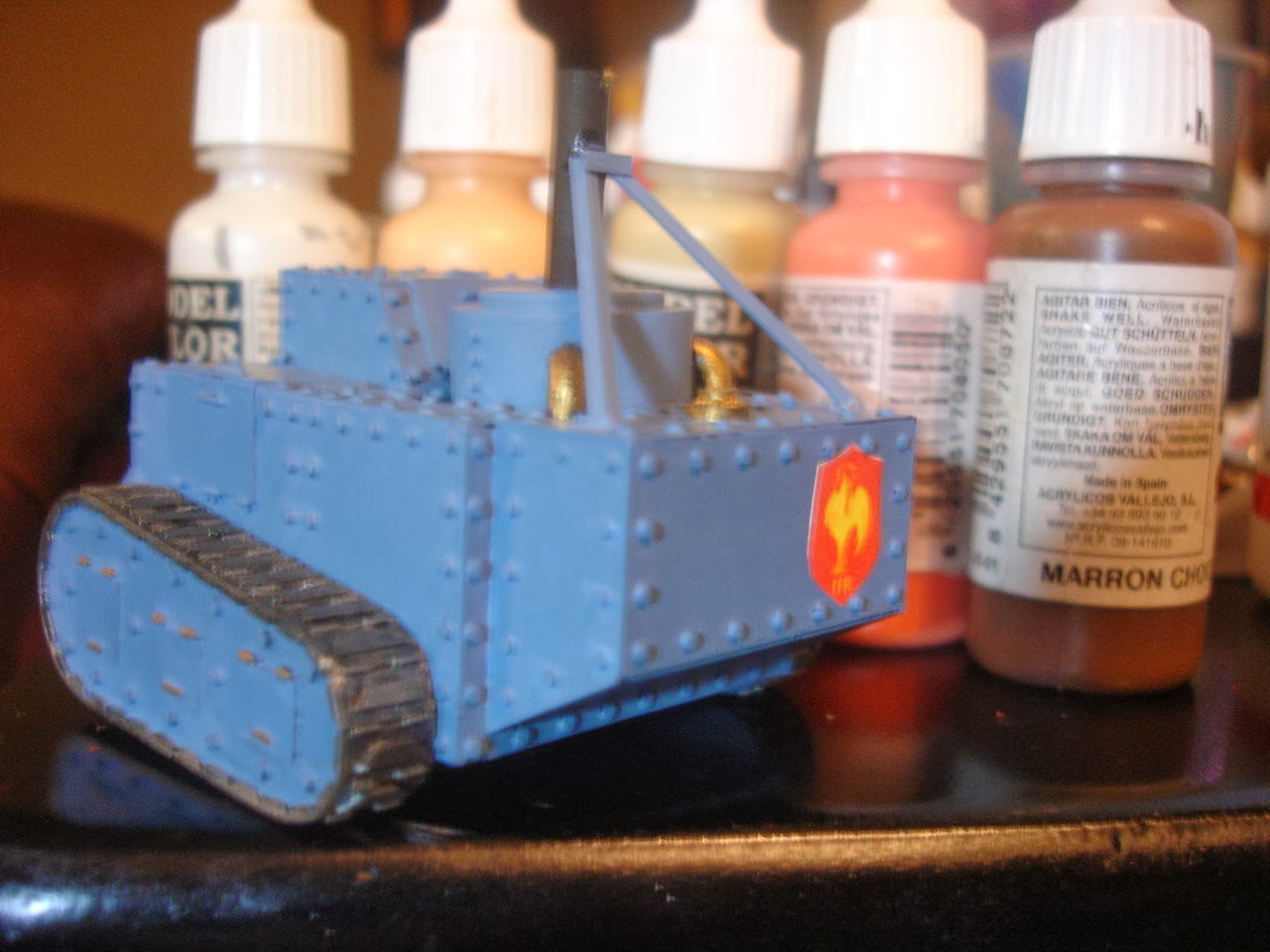 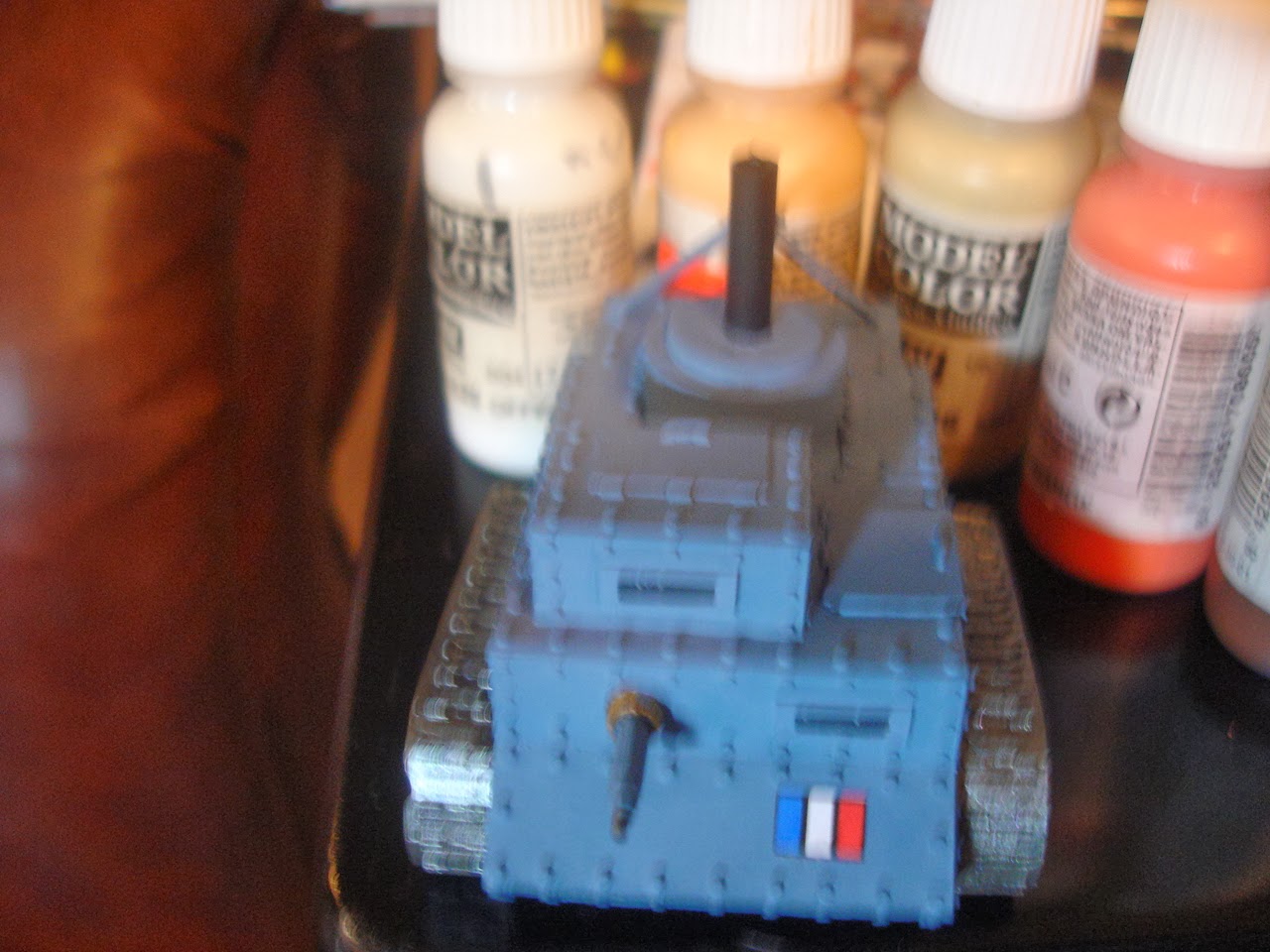 A wall of paint bottles shields from view some of my Lead Painters' League entries still in process. No peeks! I will hint and say that there will be some VSF elements in my LPL entries. Big surprise.

The aethership in highport today unloaded replacement parts for the French landship that has stalled due to incorrect pieces. Engineers have unpacked the parts and begun removing the packing grease. Once the solvent has dried, the pieces can be painted, assembled, and attached to the steamtank. A fast enquiry at the Victoria Steamworks indicates that the professional opinion for the time to complete this project as less than one week. At that time, the French should have an operable scouting vehicle.

[Editor's Note: Ironclad Miniatures rapidly despatched my replacement tracks and they arrived today. I washed the necessary part to remove any residual mold release, and I'm waiting for it to dry. I should be able to prime it tonight. Painting tomorrow, and then attachment on Monday. And then it will be done!]
Posted by J Womack, Esq. at 6:14 PM No comments:

New Issue of The Aethergraph!

At long last, I have published the new issue of The Aethergraph. You can find a link to it on the left hand column, right at the top there, or simply click here. I would like to thank my contributors, and the gentlemen that offered me submissions that I didn't have room for this time around. I'm hopeful that, especially with more submissions, I can produce another issue this spring - perhaps in April or May.

I hope you enjoy it. Please let me know what you think, and if you are interested in helping to produce The Aethergraph, email me at aethergraph@gmail.com.
Posted by J Womack, Esq. at 8:16 AM 1 comment:

Just a quick post tonight. I've been eaten up with grad school work the last week or so, and no time for much fun stuff. But I took a look around the internet tonight before i run off to bed and saw this. It is for Spartan Games's Dystopian Legions game. I still think the decision to make them in 32mm scale was a bad one - it puts them off my purchase list, for the most part. But the mechanical alligator here might be fun for any VSF game, and well, how big is a mechanical alligator, anyway? Scale neutral. You could even use it for 15mm or 6mm (!) games. 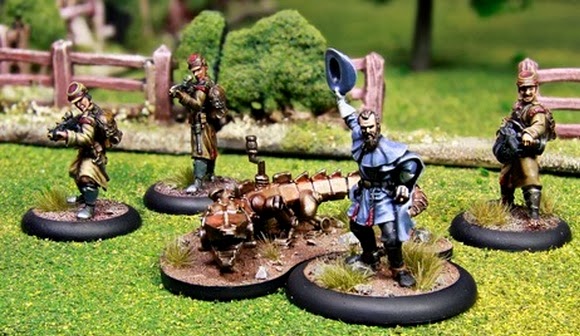 Picture is from Spartan Games's website. You can order the fellow there. And he's on sale right now (1/3 off - not bad).
Posted by J Womack, Esq. at 11:26 PM No comments:

No Love for the Black Dragon

At least, that is what the results of the poll I ran at the end of last month say. Of the 'official' Adventuring Companies, Lord Curr's is the most popular, followed by Scotland Yard. No one voted for the Black Dragon Tong. Personally, I don't care for them. The minis are nice, but the idea just leaves me cold. I am sure that some folks love them.

I like the Servants of Ra, though, and the Society of Thule, and they didn't do too well in the voting, either. What's wrong with you people? *grin*
Posted by J Womack, Esq. at 8:58 PM No comments:

Reliable sources in the French demesne report that the project to supply their armed forces with a small scouting landship (or steam tank) has come to a sudden halt. Apparently, the manufacturer supplied the government with two portside drive trains and no starboard! 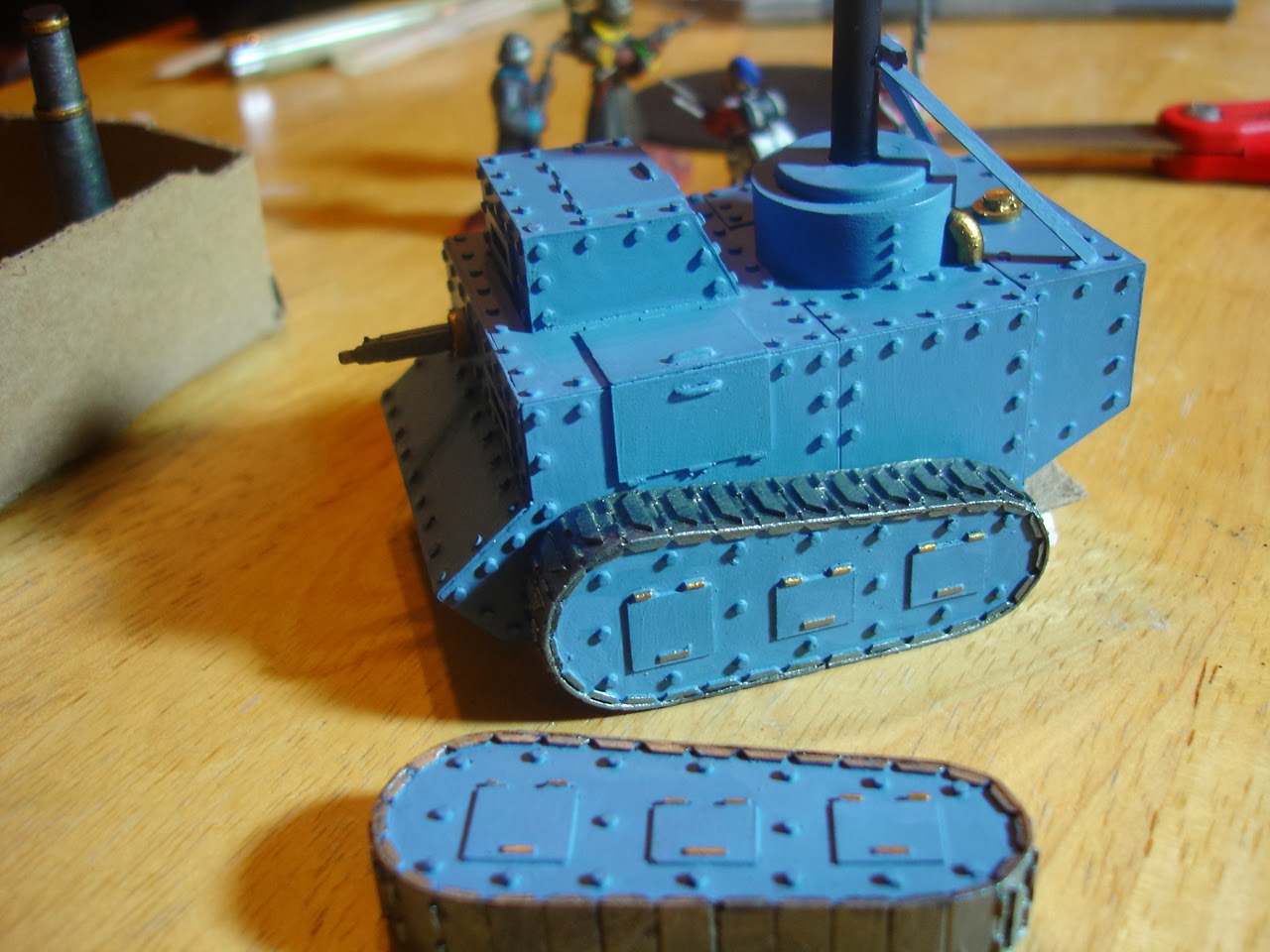 From this angle, it seems okay... 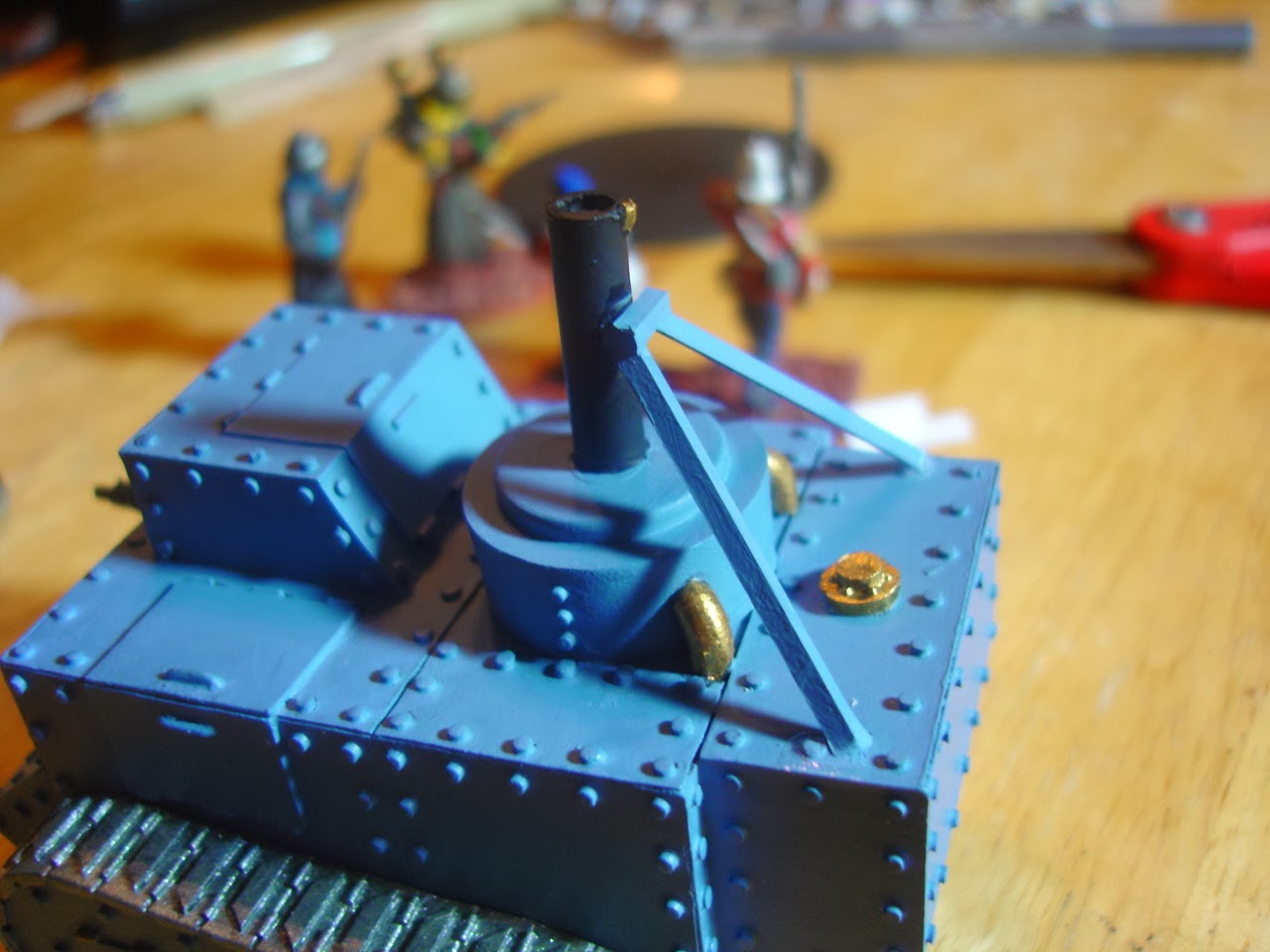 An idea taken from another: smokestack supports.
Just some L-iron Plastruct, cut and painted to match. 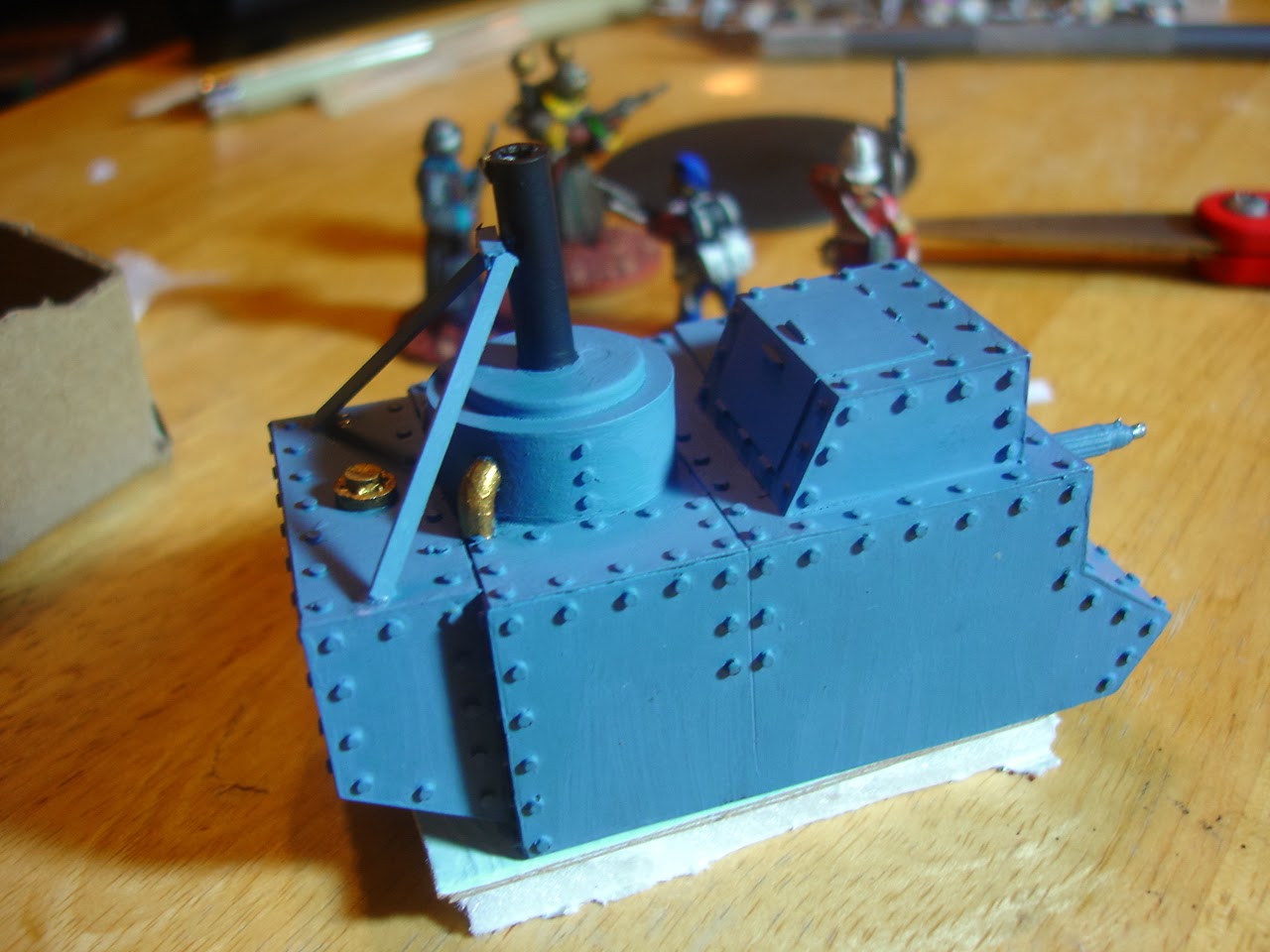 Now we see the problem...

The logo for the French National Rugby team.
I am considering putting this on the tank, along with a tricolor.

[Editor's Note: I bought this tank back at Historicon, and just got around to putting it together. Lo and behold: two left tracks and no right one. I've contacted Ironclad Miniatures (the manufacturer) to correct it. I am sure they will - they have a good reputation and I've had one similar issue with them previously which they corrected immediately and with good spirit. On the other hand, I think it is going to look quite good when it is finished!] 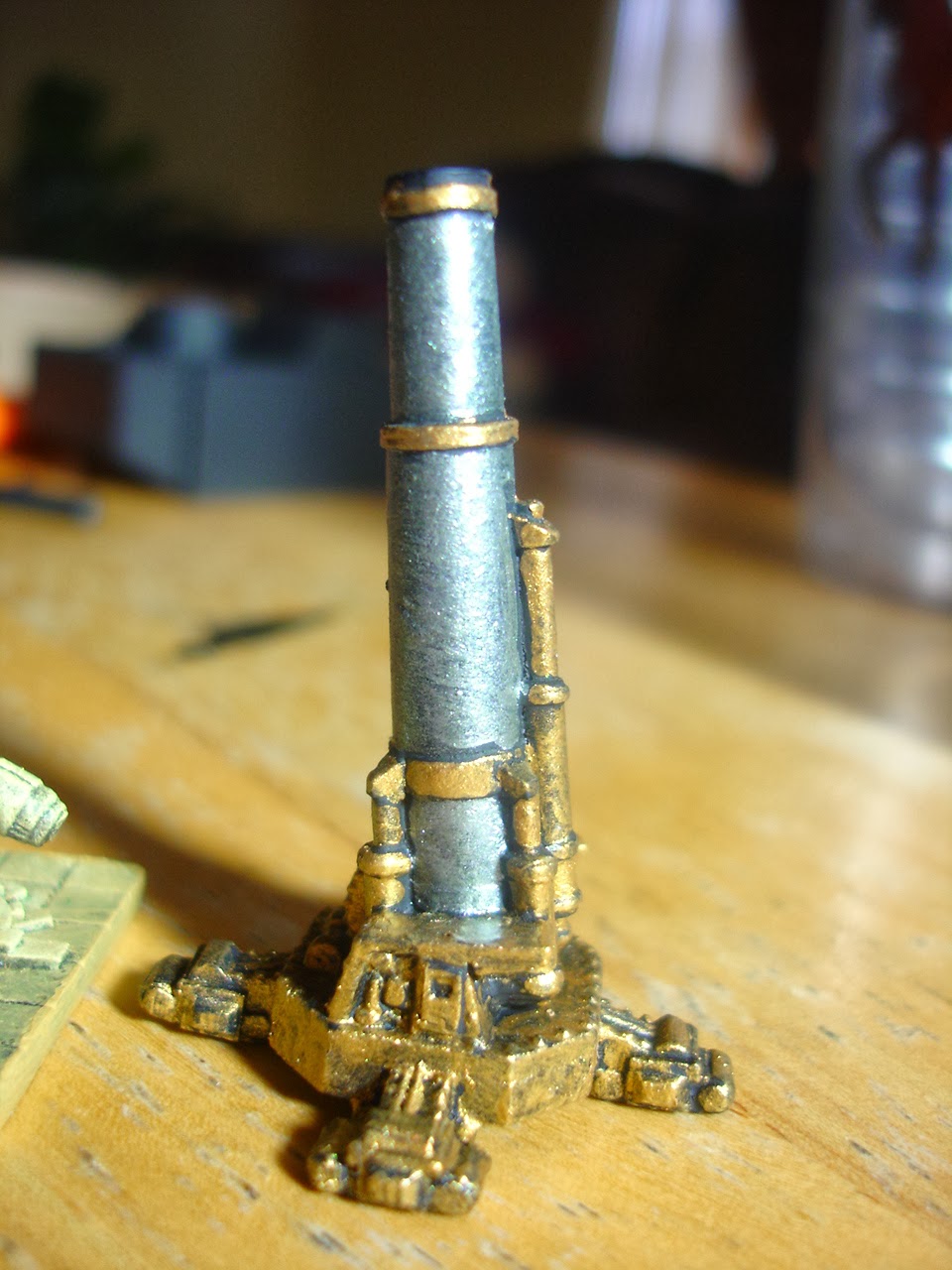 A massive cannon, able to launch a shell beyond the planetary atmosphere. The infernal device actually extends well below the ground, with only the final third of the great barrel protruding above the surface. Its range is literally planetary, able to reach any point on the surface of the Earth. The Verne Cannon, named for the visionary writer who first postulated it, acts as a deterrent to aggression against the French nation. One shell could devastate a vast area of an enemy nation - no one dares to risk it.

In other news of France's military, work has begun on a small French landship, equivalent to a destroyer escort in naval terms, one supposes. More information and photostats will be provided as the work proceeds.

[Editor's Note: This is a Games Workshop Epic 40K "Goliath" Megacannon. I am never going to stat it up, because I only plan on using it as an objective or bit of terrain rather than an actual unit. Why? Because it doesn't work. The French constructed an elaborate ruse to convince the other nations that this cannon devastated a remote island in the Pacific when test fired. They are hoping the bluff will hold out for a decade or so until it can be made operational. Regarding the landship, I have started painting an Ironclad Steam 1 steamtank to act as a French scouting tank. More on that later.]