Photos of some of today's efforts...

First up, a blue and yellow Gater... the skin is Vallejo Dark Prussian Blue and the bony scutes are done in Vallejo Intense Yellow. Lots of work still to do on hiim, of course (and on all of these, actually...) 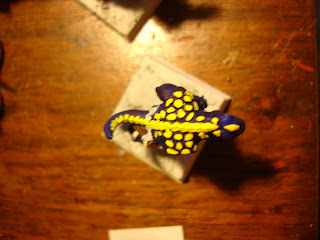 Her Royal Majesty's Viceroy for the Crown Colony of Mars, His Lordship Sir Gerald Blythingham, 1st Earl of Mons Olympus. Working on the tweed jacket and the pinstripe trousers still. And brass buttons on the waistcoat, I should think? 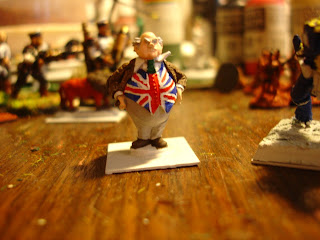 The Right Honourable Mister Percival Harlod Windsome, the Viceroy's rather useless son-in-law. Mister Windsome fancies himself quite a rugged outdoorsman, but would sulk terribly if he went on safari without his fine bone china and a decent cup of coffee, as shown here. 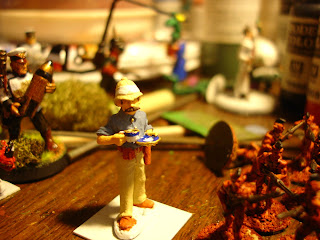 Here we see the first glimpse of the High Martians, strange creatures capable of flying! Though obviously related in some way to the more common Martians of the cities, steppes and canals, there are significant physiological and sociological differences. These primitives have retained a fleshy membrane much like a bat's wing, and generate hydrium naturally, which is then stored in the large hairy hump above their shoulders. 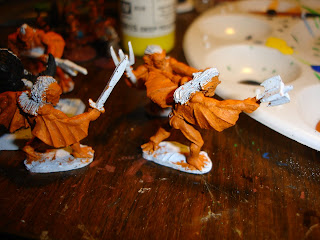 Well, that's it for tonight. Hope you liked the photos. I enjoyed getting them done and posted!
Posted by J Womack, Esq. at 8:27 PM 5 comments:

Finally.
Did a bit of painting today. Took the day off. Originally, had a class to attend, but that got cancelled, and as I already had a substitute lined up for the day... I decided that I needed a mental health day.
So, I broke out the paints and primed lead. Started four figures:
I also primed ten High Martians from Space 1889's Kraag Warriors box set [RAFM], which I purchased this summer at Historicon's flea market. As long as I was out there spraying stuff, I put the matt finish on the lizard dogs and some pigs (15mm), with two stands each for Mars and Venus. The men have to have something to eat, after all.
Finally, I started working on a large palace piece of terrain. It's an interesting bit of computer box cardboard being spraypainted to fit in the Martian landscape.
So, after a long (too long!) hiatus, I had a productive day of gaming endeavours to report. It feels good. Maybe I'll keep it up for a bit.
Posted by J Womack, Esq. at 1:00 PM 2 comments:

Good evening, friends. I would like to tell you about a wonderful thing: the 8th grade diorama.

You see, my son has a project due tomorrow for his Language Arts class. They read the book Uglies, and had a choice of projets to do in relation to the novel. Greyson chose a diorama based around a scene in the book. The scene: two teens making a very long jump on hoverboards (think flying skateboard) off a cliff to the roof of a secure building built halfway into a hillside.

Enter Daddy, with pink foam and hotwire cutter! We made a long cliff that will look smashing on Venus when the project is returned (if it is returned - it looks good and teachers always keep the nice ones). And a low hill to boot.

And best of all, Momma didn't complain about me buying foamboard and spray paint and such, because it was 'all for the school project.' Naturally, the scraps won't go to waste. I love it when a plan comes together.
Posted by J Womack, Esq. at 9:23 PM 1 comment:

Email ThisBlogThis!Share to TwitterShare to FacebookShare to Pinterest
Labels: out of character, Terrain

FROGMEN OF THE AMAZON!

Or somewhere, at any rate. Obviously, these fellows may be relatives of the bloodeye frogs of Venus. My eldest son, Greyson, found these at Historicon and bought a good number of them. It is his first real painting project. I think they look great for a 13 year old. Much better than I managed at the same age, I promise you! 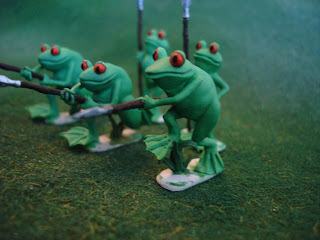 I'm not positive of the sculptor, but the minis are avialable only through Eureka Miniatures. Nic Robson, the owner, came to H-con all the way from Australia, and was a really great guy. He seemed to enjoy talking with my boys all twenty times we visited his stand, and even sent along some rules for the amphibian lads! You can buy some direct from the US distributor at http://www.eurekaminusa.com/. Go now, and tell them I sent you! Look at the turtles too. We have some of those still waiting to be primed.... 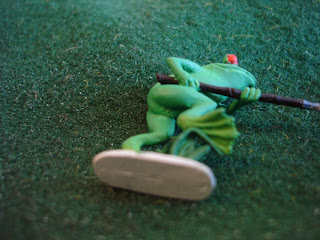 They still need to be based ( I need to get some bases ordered!), but I think they look awesome. 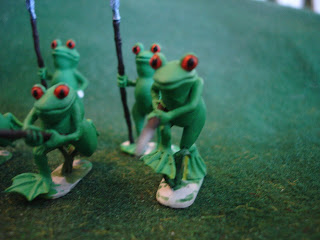 Finally, below is a shot of the newly based (but not yet dull coated) lizard dog thingy that I got from Splintered Light at Historicon. It is part of their 15mm Lizardman army, but the fellow manning the booth (whose name escapes me at the moment - sorry!) was very obliging when I asked if I could get just a few of these fellows. I love the three eyes. 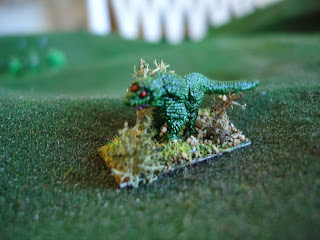 A gift for the memsahib, perhaps?

Steampunk jewelry. Some of it is pretty neat. So, if your memsahib is a fan of things steamy and punky, you might check it out. Sadly, She Who Must Be Obeyed around my home is not into that look.