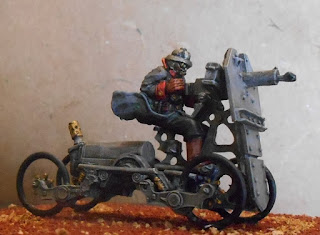 This is the Quadcycle that was destroyed a few weeks ago by my puppy.

Actually, it's the Quadcycle that Elderac very kindly sold to me to replace the one eaten by my puppy. I changed the paint a bit to match my existing minion forces and put it on a base.

But from tragedy comes renewal - I finally got that piece finished and it's ready to grace the table as soon as I stat it up for either GASLIGHT or IHMN.
Posted by J Womack, Esq. at 10:38 AM 4 comments: 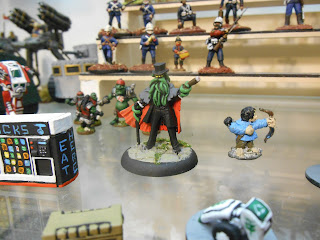 This handsome gentlebeing is known far and wide as Uncle Thulhu. His opera cape and top hat show he's a being of quality. Don't let the tentacles fool you.
Posted by J Womack, Esq. at 5:00 AM 2 comments:

A new Sergeant and some Vardu Minions

I've been painting, a bit. I've also got a new camera, so I am working the kinks out of it still. But here are a few snaps of what I've been up to lately.

First is another Empress British NCO. I love Empress's minis, and this guy has been sitting about waiting for his final touches for months. He's now ready to join the rest of the 30th Foot on Mars, defending the Empire for Her Majesty (God Bless Her). 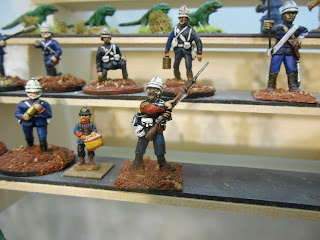 Also a Bull Snapper, a light warbeast from Hordes' Minions faction. He joins his larger cousin the Blackhide Wrassler as an experimental subject for Doctor Vardu. I made a puddle at his feet, just like the bigger one. Venus is a dreadfully swampy place, after all. 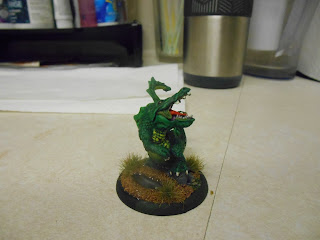 Finally, there is a pair of Razor Boars, more Minions warbeasts. I have another pair of these that I will paint soon, giving me - er, Doctor Vardu, that is - four of the aggressive piggies. 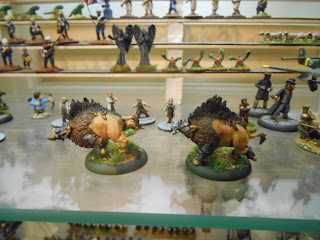