The Colonel's Been At it While I was Napping

I can not fathom that anyone who reads this blog is unaware of the Colonel's awesome work in creating toys for a Victorian Science Fiction universe. Last semester, while I was up to my eyeballs in readings and papers, I missed out on several of his 'smaller' projects. Now that I have a moment, I feel obliged to share them, in case you have also been occupied. No pithy commentary, I will let their awesomeness speak for them. You can find a link to a post regarding each of the photos just beneath the picture.

Thanks again, Colonel O'Truth, for all your amazing and inspiring work. 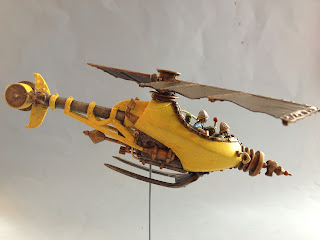 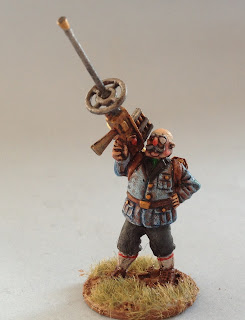 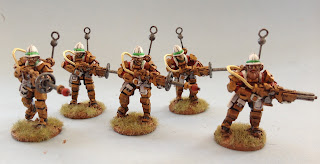 There, I think that has covered them all...

I have mentioned Ironclad Miniatures before now, I am certain, because I really like their range of 28mm vehicles for Victorian Science Fiction. In addition to some very nice resin vehicles (I own two, and want more), they also make a line of 28mm figures. I dropped by their online store this evening and found these offerings, and a few others that didn't catch my eye quite so well, that have been added since the last time I checked in.
The first is named "Phileas." Phileas has apparently met with an unfortunate mishap, depriving him of the use of his natural arms. British engineering - the marvel of the worlds! - to the rescue! He now has two steam-powered mechanical arms. Appears to have a bit of a temper, as well, from the grimace on his face. 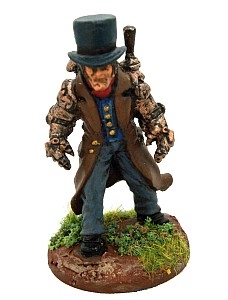 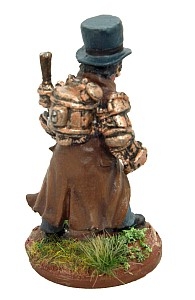 The micro-steam engine.
The second figure of interest is a lovely lady named "Constance." A woman of unimpeachable virtue, she is prepared to defend said virtue with the aid of her Galvanic Emission Pistol. Sized just right for a lady's handbag.﻿ 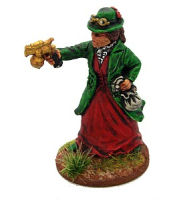 Third and last for now, this fellow goes by the nom de guerre of "Tobias." Obviously an agent of some governmental agency, one only hopes that his loyalty is held by Her Majesty (God Bless Her!), rather than some nasty, sneaking foreign king, like the Tsar or Kaiser. Or, Heaven preserve us, the French! His sidearm seems to operate on some Fluidic Phlogiston or Essential Alkali. 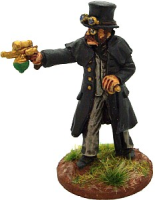 For a Few Minis More

This time, 25/28mm miniatures, all to be found on the Brigade Games site. First up are from Parroom Station's Bob Charrette, an old favorite sculptor of mine. Not that he belongs to me. Nor that he is all that old. Well, maybe getting a few years on him, but any rate you get what I mean and I don't want him to get mad at me when he finds out I said all this about him since we have played quite a few games together at Historicons and... ahem. Anyway. His minis are on my shelves and on my tables. Actually, I have some on my painting table right now, waiting to be turned into Prussian Line infantry. However, this is part of a new line called Secret Science. Check them out here. They have been available for a little while, but my blogging has been less than punctual lately. 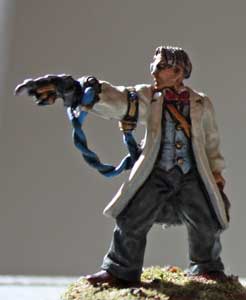 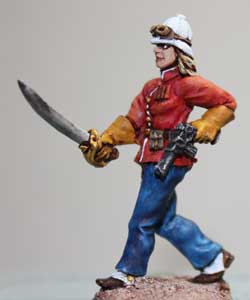 Next up, and also available from Brigade Games, are some lovelies from a new (to me, at any rate) "Steampunk" line. I don't know the sculptor off hand, but these are nice and imaginative sculpts. I think the troops with breathing apparatus might make it into my collection as 'Aethermarines', since you can't breath the luminiferous aether. However, in my VSF universe, you can breathe the air of Mars and Venus just fine. Useful for Moon-based battles, as well. On to the photos and descriptions. 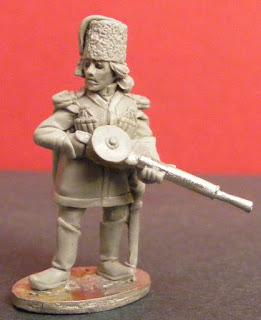 One of the Russian character pack models. I like her a lot.
I am looking forward to seeing if they release some regular
female Russian troops. 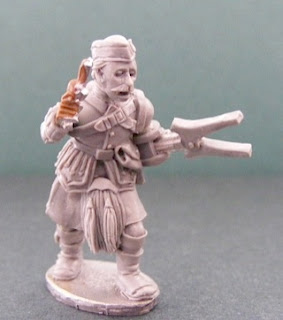 From the British character pack. A Scot with a mechanickal arm.
Um, yes, please! 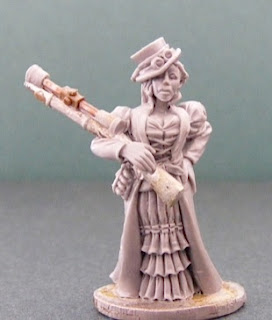 Also from the British Character pack.
I believe she may be a crack shot. 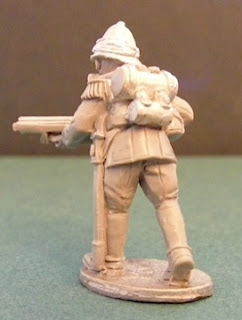 A view of the breathing apparatus, on the British officer. 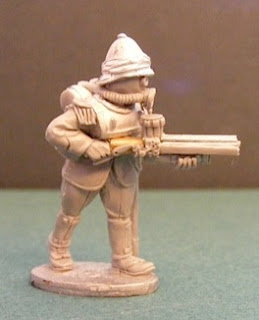 Front view of the officer.
Notice mask and reciprocating rifle. And epaulettes.

Of the Steampunk line, so far I like the British character pack the best, and plan on getting one soon. I will eventually get some of the flame-wielding masked minions as well, and the character models from Parroom, but would like to see a reduction in the current lead mountain first. HAHAHAHAHA! 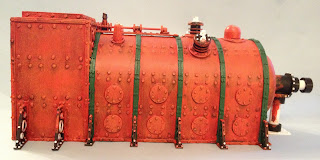 Some tidbits from the Interconnected Differencing Engine Network


From Troublemaker Games, a company which I have noticed before, but which has expanded their offerings:

Originally scaled as 10mm, I think these could be used for impressive automatons at the least for a 6mm game. Just paint in a metallic scheme, and I think it would work well.

This set includes three pieces, it seems. One is a beautiful piece for terrain. One is an armoured vehicle, and one is a piece of high-tech gimcrackery. A British version is also available, as is a Martian one.

The last piece of German hardware I shall mention here today, it reminds me something of the Bioshock videogame franchise. Still, pretty cool looking figures.

This is a nice looking piece of kit. Very VSF feel, especially with the giant raygun - excuse me, an "Unfathomable Energy Projector" - on the aft turret. Note that this is a land vessel. It is resin, and 16 cm in length (about 6 inches).

I really like this guy. Classic saucer shape, big honking gun, and what looks like a pair of smoke stacks coming up from the rear. At 8.00 GBP, it isn't the cheapest thing out there, but still, it looks good. Also a resin cast, it comes with a clear flight stand.

For the first time in months, progress has been made in the mechanickal works. Pursuit of further education has certainly slowed progress to a glacial pace.

Our first offering is the Iron Mole. The product of Otto Maton's fevered imagination and advanced mechanicks, the Iron Mole can bore through the hardest stone in mere moments. 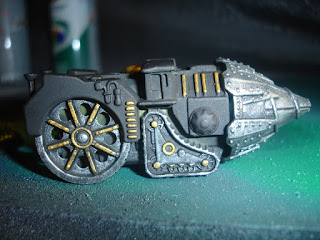 Next up is one of a pair (both are completed, with slight variations) of self-propelled field pieces. These can be used in any of the three scales I play in (6mm, 15mm, and 25mm). I purchased them painted over a year ago, in a greenish-black scheme. I touched up the paint, added the brass touches and finished the bases up. I left the two in their neutral paint scheme so that they can be included in any VSF force, however, the bases are not really suitable for a Mars-based game. I need a name for these, too. They were originally designed for the Warmachine game, but I don't want to use their designations. Maybe call them 'Cataphract-class Self-propelled Gyro-stabilised Field Artillery'? Any other suggestions? 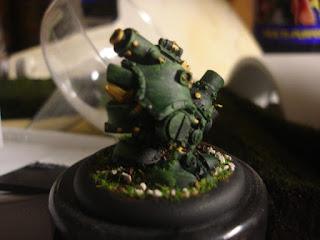 So, there you have it. The first content post of 2013. School begins again in a week, so don't expect this to continue too much, but I will try my best to create more this semester.
Posted by J Womack, Esq. at 9:44 PM 1 comment:

I'm cheating and using Time Lord technology obtained at the Doctor Who Experience in Cardiff over the holidays. Thus, I can make this post appear on January 1st at 0001 hours, even though I didn't type it until 2117 hrs on 4 January.

Happy New Year to all my friends and followers. Look for photos of actual painting that has been done in 2013, coming soon!
Posted by J Womack, Esq. at 12:01 AM No comments: