Royal Hawaiians Arrive on Jungle Planet
Reporting for duty to Venus, the 25th Royal Oahu Rangers are a specialist corps of tropical scouts and pathfinders known affectionately as the "Birds of Paradise" for their use of tropical bird calls for secret communication in while on missions. Having served in various island actions both against homeland threats and in various island skirmishes, they are adept at navigating the threats of tropical environments. They are skilled in ambush, raiding and counter-raiding tactics and fight in what has been described by many Europeans as a very "un-gentlemanly" manner. Already perfectly acclimatized to hot and humid environments and undaunted by the drizzle and miasma of a rain forest, they were the perfect asset for the Kingdom of Hawaii to lend as aid and a sign of solidarity with the Republic of Texas.

Their commander, Major Thomas Kipitupu, is proud to serve his king alongside his kingdom's Texican allies. He and his men will lend all of their talents to the efforts to forge a new colony in the hostile, shadowy jungles of Venus. Forging paths, scouting new territories and lending warclub and rifle to battle any hostile forces they might encounter, I am sure the Texican Marines on Venus will quickly come to appreciate their merits.
Sadly, our staff photostat artist was confined to his bunk with a nasty fungal infection, so no photostats are available at this time. We hope he will recover soon, so he can get back to work and earn the ridiculously large sum he receives as a per diem from this journal... I tell you, it's the last time I hire one of my wife's useless relatives...
[Editor's Notes: Eli sent me the basic text of the above copy in an email. I made a few minor changes to make it fit in a bit better stylistically, but it's a great addition to the VSF storyline as far as I am concerned. I wonder what's going to happen on Venus? There should be some kind of adventure their in the nearish future if I can pull a few things together. Stay tuned!]
Posted by J Womack, Esq. at 10:57 AM 1 comment:

Martian Towns Seen From On High!

From high above the Martian city of Gwalli-Andor, at night. The town is quite dark.

The villa of Kez Ra Tohnassi, the wealthiest merchant prince in Gwalli-Andor.

The Tower of Righteous Harmony and Conduct, a cross between city hall, royal palace and a temple.
All of these magnificent vistas were photostattted by our Lead Correspondent, Mr. Eli Arndt. He took the photostats from the highest of altitudes aboard a native kiteship. You can see the acres of shining white kur plants, whose fibers make an astonishingly sturdy fabric, lightwieght and airy. Something like a cross between cotton and silk, it is one of the staples of Martian dress.
We are looking forward to additional aerial photostats from Mr. Arndt as he travels across the Red Planet. As always, his despatches are eagerly awaited by our hungry audience.
[Editor's Notes: Eli has been making some 1/1200 Martian terrain from scratch for Land Ironclads and Aeronef gaming. He showed me these pictures of the work in progress, and, well, I thought they were absolutey brilliant and deserved a wide audience. I made up the names and background material for this post, but I hope he uses the town name at least - I know I will be using it more in the future.]
Posted by J Womack, Esq. at 9:06 PM 4 comments:

In America, today is Veteran's Day. It was once known as Armistice Day, commemorating the end of the First World War, then simply known as the Great War.
In the United Kingdom, it is Remembrance Day. More solemn, I think, than Veteran's Day. More like our Memorial Day, which is a day to commemorate the fallen.
Most of my readers like to play at war with little toy soldiers. A harmless enough pastime. But let us never forget that real wars, unlike those we fight in an afternoon across the tabletop, leave real casualties: wounded, maimed, mad and dead. Their sacrifice - their willingness to sacrifice - is what we honor on this day.
So to all veterans, of any branch of service, in any conflict or in peace, and of any nation friendly to the United States (that especially includes you Brits and Commonwealth types!), you have my most profound gratitude, and the gratitude of my wife and two sons, who live in peace and safety thanks to you.
I wish that the only wars we still fought were those on tabletop, but mankind just doesn't seem to be wired that way. Maybe one day we'll get a software upgrade that will resolve the 'bug'. Until then, thanks again for watching out for the rest of us, ladies and gentlemen of the armed services.
Posted by J Womack, Esq. at 10:18 PM 1 comment:

Email ThisBlogThis!Share to TwitterShare to FacebookShare to Pinterest
Labels: holiday, honors, out of character

Two New Buildings Begin Construction
Two new native Martian structures are under construction at this time. They are made in the traditional manner, of fitted stone covered in a layer of gritty stucco. They also have the familiar 'dust lip' threshold around the structures to prevent the fine dust deposited by the numerous sand storms across the Red Planet's face from entering the building at ground level. 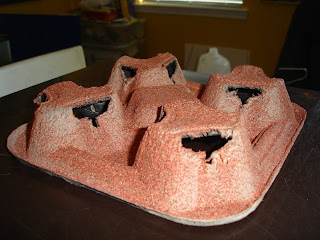 A manufactory, with large vents in the ceiling to release the heat and noxious gases of industrial production. These vents can be quickly shuttered in case of storm activity. The central node houses the elevator equipment that leads to the subterranean manufactory. 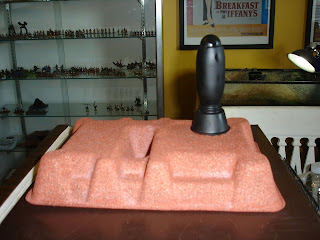 An opulent home in construction. Notice the large water vapor extractor unit on the roof of the building. Luxury indeed, to provide your own water. It is believed the owners may soon begin selling water to their less fortunate neighbors.
[Editor's Notes: These are nominally going to be in 25mm, but nothing scale-specific has been added yet.] 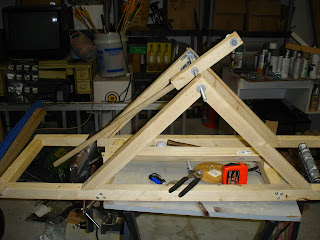 The massive war engine pictured above, in its nearly completed state, threatens to demolish obects along the Gulf Coast of Texas! Though difficult to tell in this photostat, it is taller than ten men, and can hurl a six foot boulder hundreds of feet! Flee in terror!

[Editor's Note: The picture above is of the trebuchet my son and I built for his science fair project. In 1/72 scale (1" = 6'), it would be about 80 feet tall. It throws a golf ball about 50 feet with a ten pound weight and a 18 inch throwing arm. We tested it with different lengths of arm and different counter weights. Ain't science fun?]