To Infinity and Beyond: Canal Cranes

From DLI's blog, a nice add on that I think I shall need for my own canals.

To Infinity and Beyond: Canal Cranes: I'm well behind on everything .....again! But here are some human canal key cranes for unloading those cases of rifles to sell to that...
Posted by J Womack, Esq. at 11:53 PM 1 comment:

Threeway Death Match in the Park!

Tonight I witnessed a horrible carnage at the Park. Three groups of armed miscreants attempted to eliminate one another with extreme prejudice. The participants included Lord Curr's Company (run by my son Dane), the Servants of Ra (his friend Zane), and Otto Maton's Mechanickal Menace (his other friend, Jerry). Maton brought few forces along with him, but what he brought were powerful indeed: a pair of Maxim-armed clockwork soldiers and a sneaking assassin spider! Akhenaton brought his usual horde of disposable cultists and a bewildering array of mystical powers. Curr had his usual riflemen and friends as well.

Sadly, the only man on the scene with a camera was killed by all of the flying lead. Even worse, his camera was smashed to bits, ruining the exposures. Reports agree that Curr's men were gunned down by machinegun fire when they tried to form a massive volley-firing line. Sairah the Assassin did for both Mad Mick and Lord Curr. With Curr's forces disposed of so handily, the Mechanickal Menace turned their blazing autofire on the remaining cultists. Akhenaton closed, but not rapidly enough, and was gunned down in a hail of concentrated Maxim fire. A lone cultist made a single last-ditch effort to kill Maton, but alas, his quarry escaped him. The valiant cultist, frenzied at the loss of his pharaoh, gave the ultimate sacrifice in the end, blasted into a messy pulp by the clockwork soldier mere inches from him.

[Editor's note: This is the fifth game of IHMN played in our household so far this year. The boys really like it, and I am becoming more and more enamoured of it as a skirmish rules set. I just ordered the first expansion to the rules as a late birthday gift to myself.]
Posted by J Womack, Esq. at 11:19 PM 1 comment:

The idyllic peace of Regent's Park was broken this past weekend by a struggle between Lord Curr's 'Incorrigibles' and the Mechanickal Menace of Herr Doktor Professor Otto Maton. It seems some sort of mad science experiment gone horribly wrong resulted in a terrible beast escaping confinement. Two grisly murders in Regent's Park led Lord Curr to investigate. Maton, obviously intent on securing the monstrosity for his own nefarious schemes, arrived on the scene at the very same moment, and a struggle ensued. In the end, massed volleys from several of Lord Curr's men brought the beast down. Maton was also injured, but dragged to safety by his loyal automaton servants as they quit the field.

Sadly for our news journals, there was no one with photostatic apparatus available at the scene during the fracas. However, in the aftermath, some stills of the park were taken. These we present here, for your enjoyment. 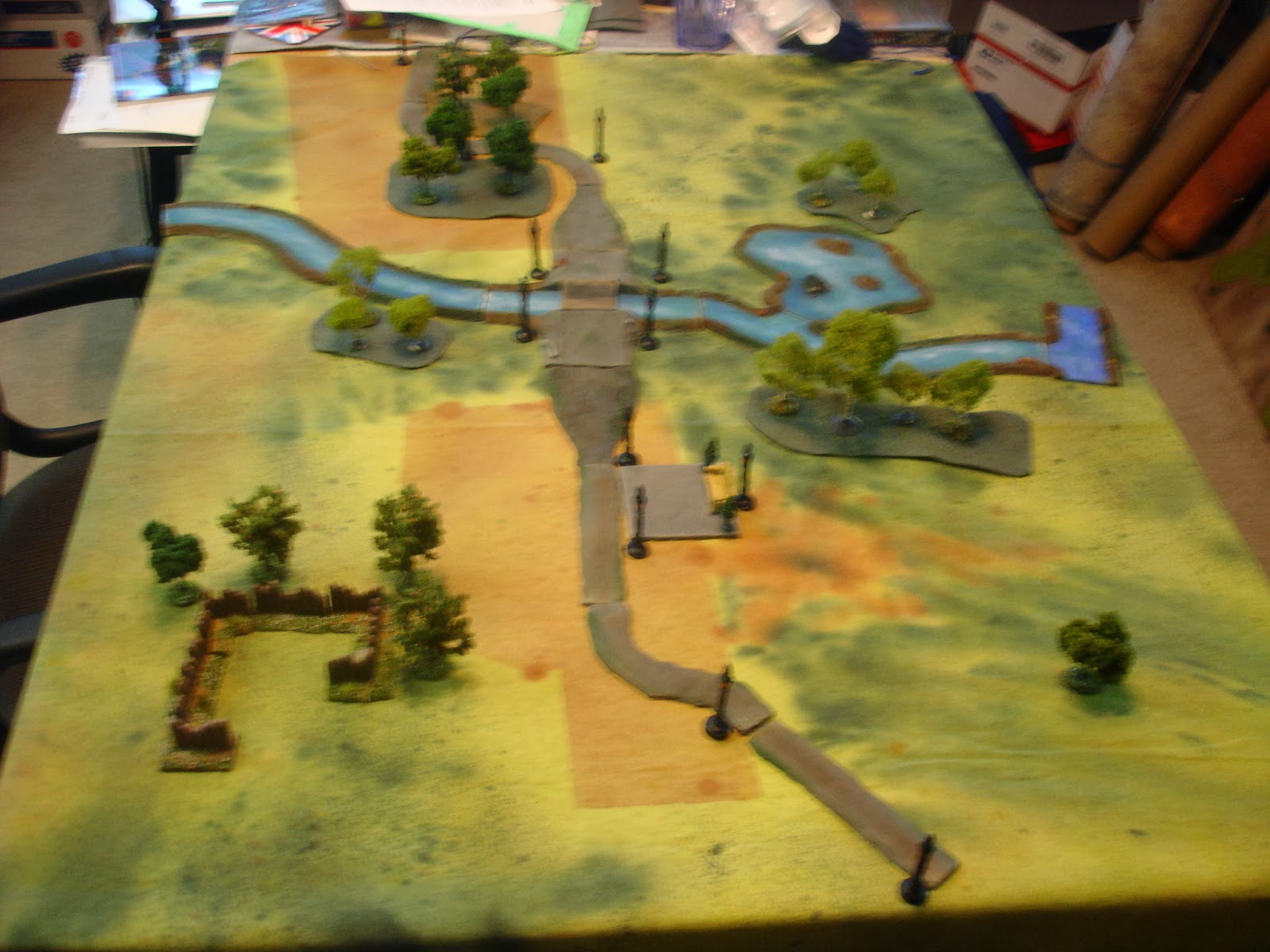 A corner of Regent's Park 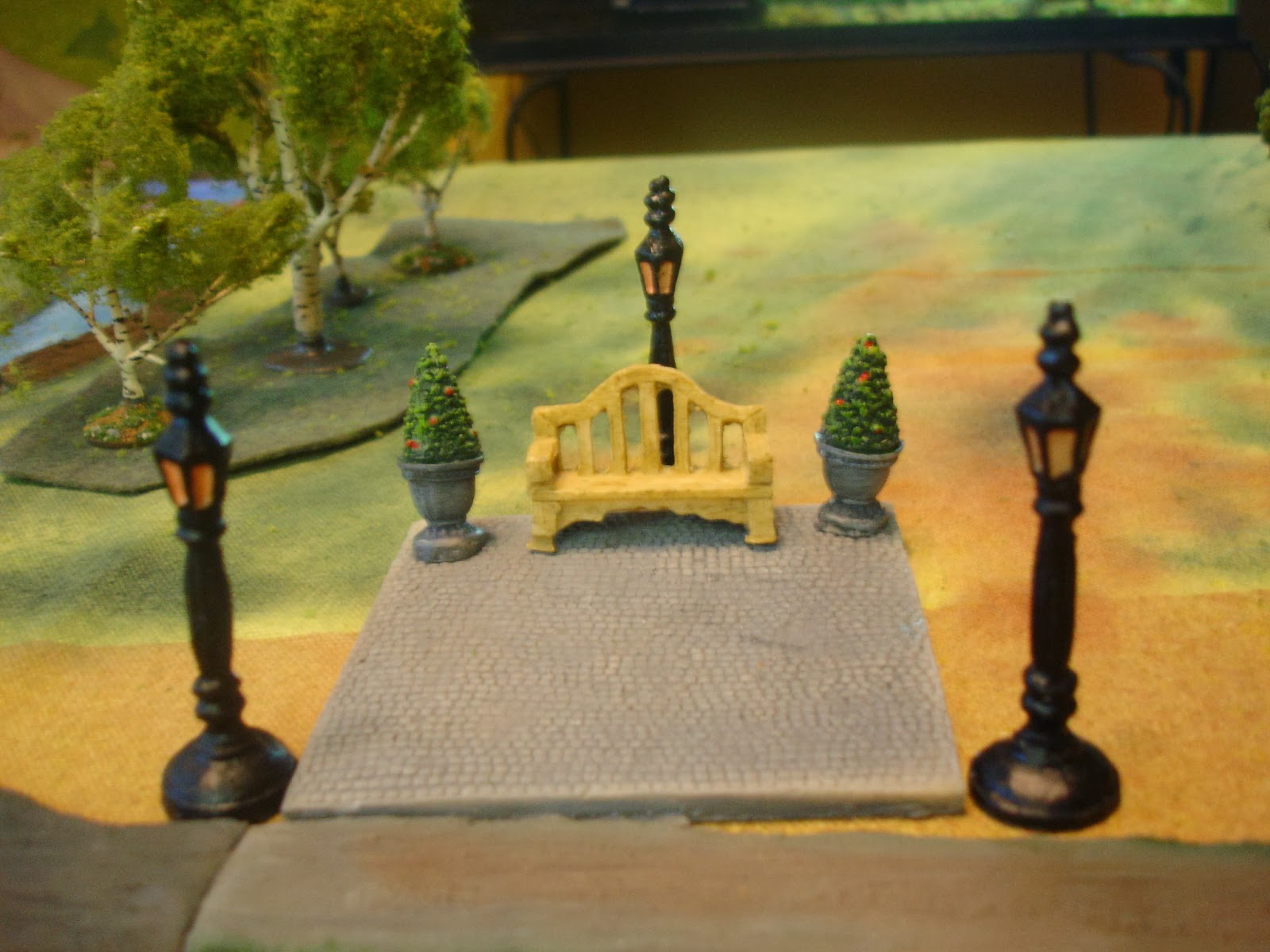 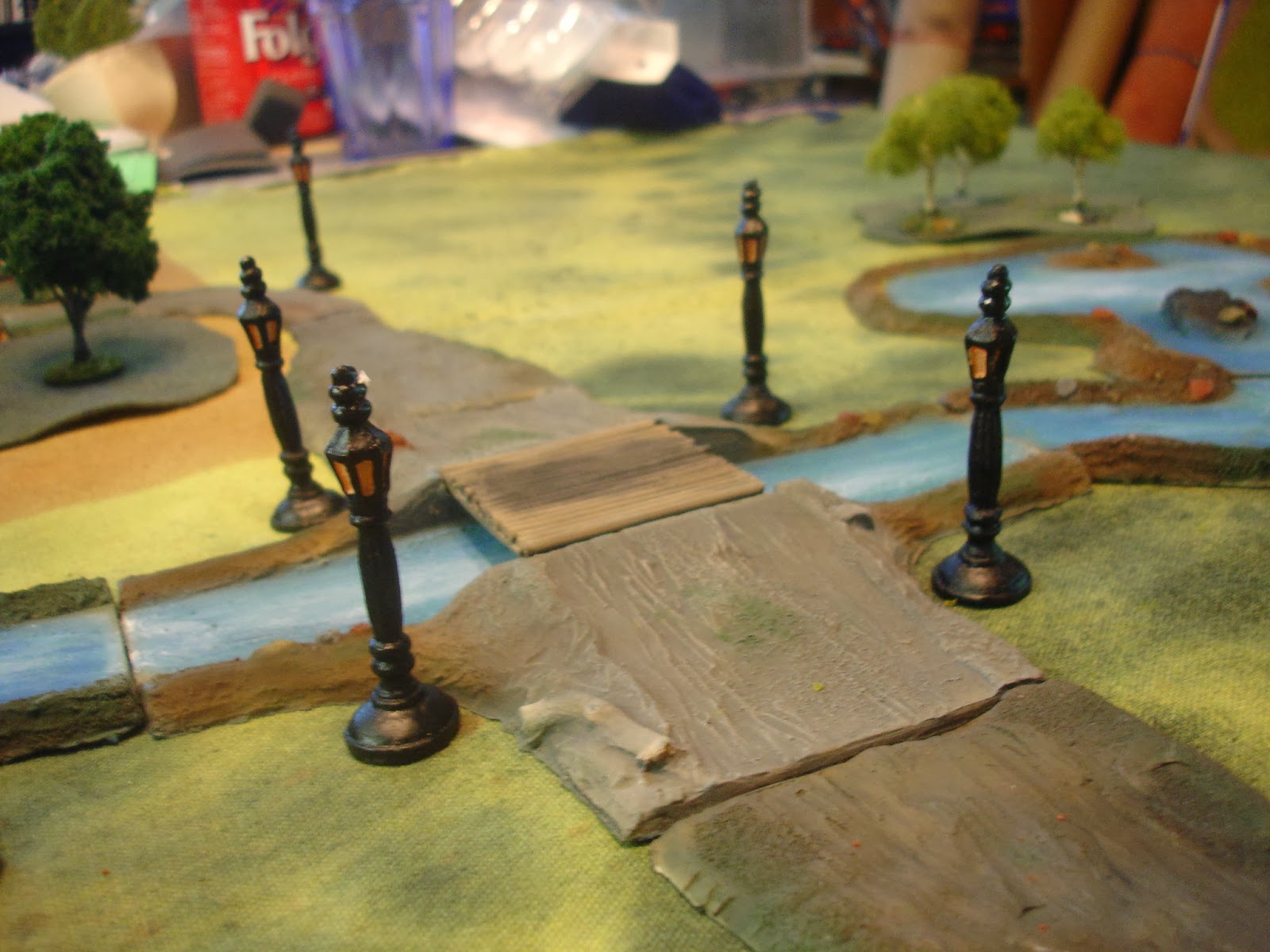 The bridge under which 'Bad Jack' lurked. 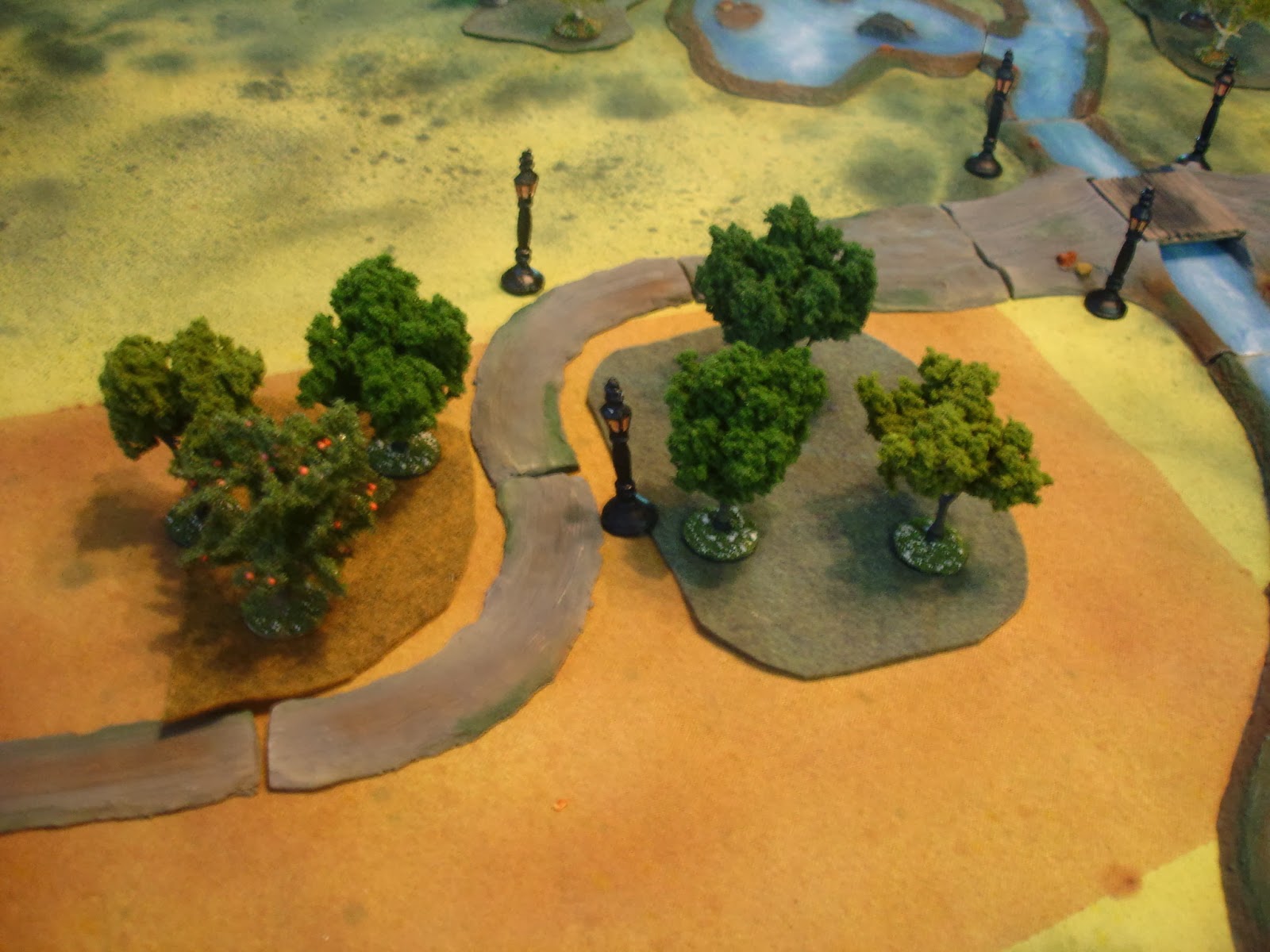 The path winds through shady trees... 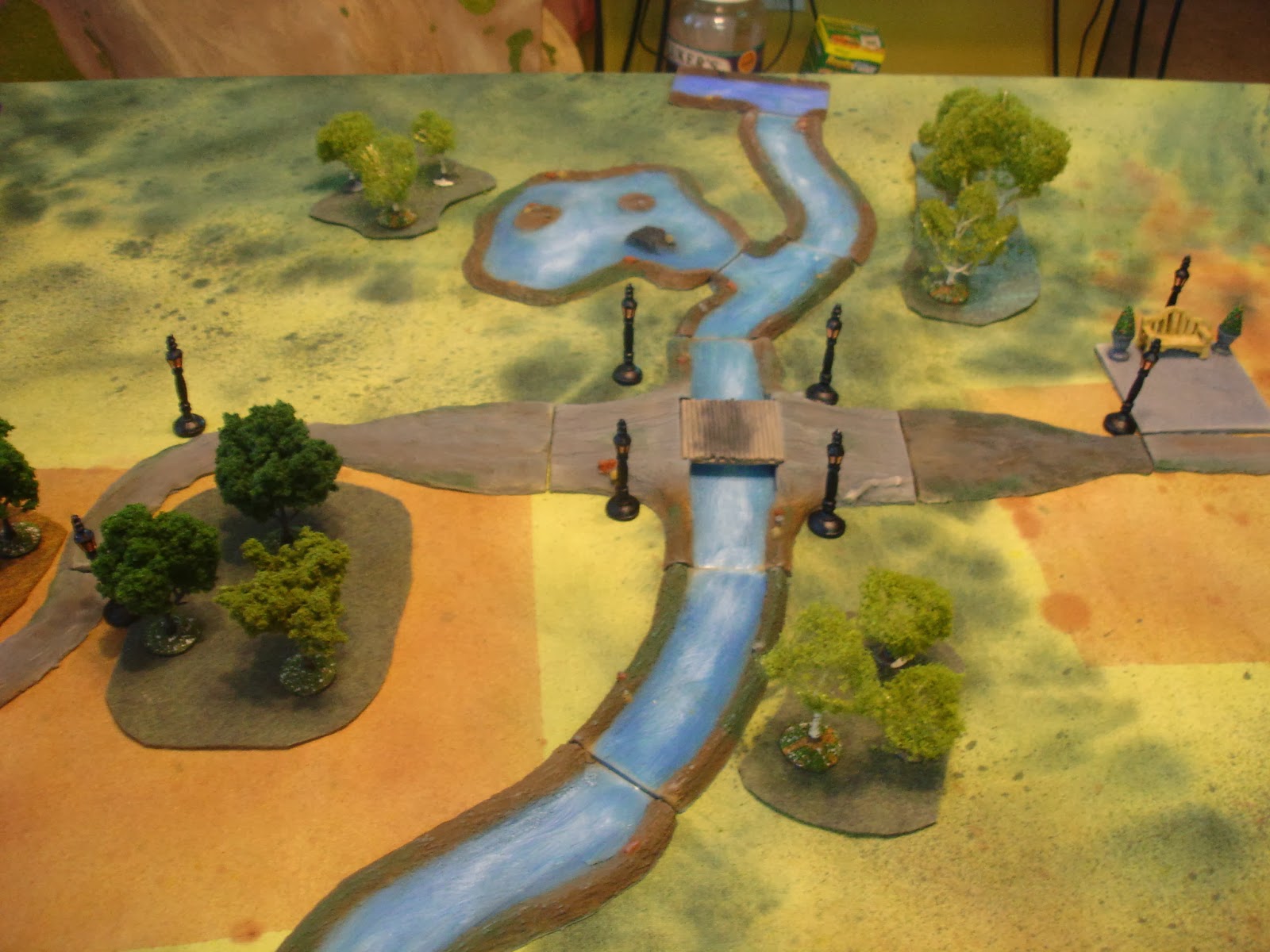 Graceful willows along the riverbank.

In honor of the day the Republic of Texas declared itself independent from Mexico, the Texican Legate and his wife will host a traditional Texas-style picnic meal. On the menu are a variety of hot smoked beef cuts with a savory sweet 'barbecue' sauce, chili con carne, cornbread, a cold potato salad, stuffed cabbages, and something called 'tamales'. Dessert will be pecan pie. Of course, beer and whiskey will be available to drink, as will punch or iced tea for teetotallers and young children.

A solemn ceremony of remembrance will take place at noon, with bugler playing retreat and a rifle salute to the Texican fallen - 186 shots in total, one for each man who fell at the Alamo siege. Food will be served beginning at 4:00 in the afternoon, until it all runs out. Last year, this was near midnight. Fireworks will be shot skyward immediately after dark. The best view of the fireworks will be on the eastern edge of Victoria Landing, opposite the downport.
Posted by J Womack, Esq. at 12:00 AM 1 comment: