I have added a link to the journal of a Prussian militarist who is known only by a typically sinister codename: DampfPanzerwagon. Of course, as we all remember from our Intro to German courses at Eton, this means Steam Armor Wagon. It's probably some sort of Hun attempt to re-create one of Her Majesty's steam-powered landships.

I recommend you all keep a close eye on his journal, as he may let slip a clue as to the dastardly plans of the Kaiser if we are watchful. On the other hand, perhaps not.

Also, check out the Frothers Unite pages. Great stuff there, and quite civilized (i.e., British).

I've been in touch with another local aficionado of VSF gaming lately in the local area. We are considering a game in 25mm scale. While it is not the One True Scale, I do have some miniatures in that size. And, a game is a game, what? Right-o! Of course it is! We met via The Miniatures Page (theminiaturespage.com) and the message system there. Quite ingenious, and an excellent means of keeping abreast of developments in the hobby. I highly recommend you visit regularly.

I apologize for the extended delay between journal entries lately. Been a busy time around the domicile, you know? I shall endeavour to improve in the new month. Speaking of which, it is almost time for a new monthly poll... be sure to check back tomorrow and vote!
Posted by J Womack, Esq. at 5:54 PM No comments:

...seems to have hit a vein. By a good piece it is already the most voted on poll I have run. Granted, it is one of the more 'serious' polls as well, so that may account for your participation in it. Also, it is the first I have run for an entire month.

What think you all? More substantive polls and fewer ridiculous ones? Or should I run the substantive ones for the entire month and then throw in the more lighthearted ones for a shorter run?

I am already working on the question for next month's poll, but that shall remain a well-guarded secret until after midnight on 31 March...
Posted by J Womack, Esq. at 11:04 PM No comments:

Email ThisBlogThis!Share to TwitterShare to FacebookShare to Pinterest
Labels: poll


For those of you that have been following this telephonic differencing engine journal for a bit, you'll know what troubles we've had here with those blasted engineers.

First one of them gets drunk and breaks the port rifle.

Then one engineer gets the bright idea that instead of replacing the rifle, his new-fangled flamegun invention (the Richardson Heavy Flamegun, patent pending) would be better suited to the landship. "It's already been fitted to ASA #27," he pointed out. "And look what sterling service it provided at Ghola!"

So, no sooner has that field expedient been approved, mounted and tested, than the starboard rifle mysteriously disappears. Richardson blames it on thieving Johnnies, but I have my own suspicions. Obviously, we need a second Richardson for the starboard side as well. Unfortunately, he's only made the two so far, and we have a month's delay in getting another cobbled together.

Finally, it is all together. And here's the proof: 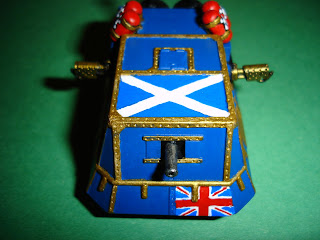 Begging is so demeaning.

So instead, chaps, I think I shall simply demand more comments from you.

In regards to the preliminary information and photstats of the Ghola action, Don M. said:

"Can't wait to read the full report, looks like an interesting battle. Great work on the paint job and nice Martian looking terrain!"

Everyone loves feedback, especially of the positive sort. I am also willing to take constructive negative criticism.

I will simply have to see into the cause of the unseemly delay on the After Action Report. The Chief has been out of town for the last few days. I am sure that will be his rather paltry excuse. That, or some nonsense about the wife demanding some of his time and attention. Harumph!
Posted by J Womack, Esq. at 11:51 PM No comments:

Still waiting for the Reports...

But here are a few pictures just to whet your appetites.


The first shows the village of Ghola, with two troops of Galforrian Emerald Legionnaires guarding the shrine. In addition, a cannon has been sited near the gate of the southern wall. All animals were removed from the stone corral on the northern edge of the village, and three Martian riflemen await the British attack there. 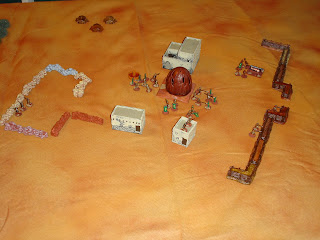 The second photostat depicts the advance of the Legion Extraterrestriale, along with l'Dame du Chaud, the Steam Lady. Notice all the smoke pouring from the boiler... 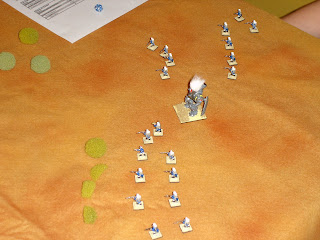 And this last shot for tonight, ASA #27 of Her Majesty's Royal Artillery advances with loyal sepoys of the 1st Brittania Foot. In the background you can see both the Lieutenant and the late Sergeant Nuckles, as well as the bugler. Also, notice the thick Martian thornbushes. Texicans who have come to Mars claim it makes for excellent barbecue smoking, a cross between their native mesquite and hickory. Me, I just hope that no Martians are hiding in their depths, waiting to spring an ambush! 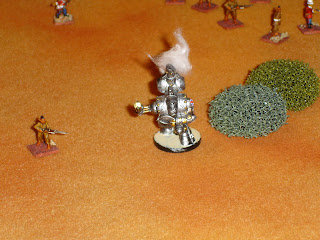 That's all for tonight. Keep posted... I have been assured that the Chief Petty Officer in charge of relaying the After Action Report shall be doing so soon (hear that, Chief Stewart?)...
Posted by J Womack, Esq. at 1:07 AM 1 comment:

We have received preliminary reports in regards to a patrol action in the Britannia Mars Colony last night!
A platoon of sepoys from Company B, 1st Britannia Foot (Sepoy), under the command of Lieutenant Heribert Popinjay encountered a suspected troop of the Galforrian Empire's infamous Emerald Legion stirring up trouble. The villagers of Ghola generally live happy and productive lives under the Pax Britannica, but intelligence reports of Galforrian rabble-rousing indicated that a religious uprising may occur. Lt. Popinjay and his men were sent to investigate.
Our initial reports also mention an encroaching patrol of the French Legion Extraterrestriale. These ne'er-do-wells' presence can only mean trouble for our peaceful colony on Mars.
Lt. Popinjay's official report is expected to be recieved via Royal Interplanetary Heliograph in the next few days. Please stay tuned for further information.
Posted by J Womack, Esq. at 8:21 AM No comments:

The Scot engineer in charge of repairing and reassembling HMLS Albert after its trip via ethership to Mars has been sacked.

The persons responsible for hiring him have been sacked.

We'd sack the persons responsible for the engineer's birth, but they are pre-deceased. So they avoid a well-deserved boot to the head. In addition to being sacked from whatever pathetic position they may have once held.

Albert has been further modified, on the basis of maintaining a balanced weight to both sides of the vehicle. The heavy fuel tanks for the flame projecting device on the port side of ht evehicle were causing Albert to develop a noticeable list. Perhaps the engineer never noticed it, him being a wee bit too fond of the creature, as my Irish nanny would have said. He listed a bit to port himself.

At any rate, the only solution proper English engineers could devise in a short time that was both economical and practical was to remove the starboard rifle and replace it with a flame projection device as well. Repairs are being made today; it is hoped that the Albert will finally be prepared for action by tomorrow.
Posted by J Womack, Esq. at 5:36 PM No comments:

The Shrine of Ghola


Native resistance to colonial expansion is on the rise. Much of it is based on two things: the Empire of Galfor's desire for power and the rise of a fundamentalist religious movement amongst the natives.


Galforrian troops are stirring up trouble in the border areas. One unit of the infamous Emerald Legion has arrived in the small Martian village of Ghola. In the center of the town is a stone shrine, which local legend claims landed from the heavens. Inside the shrine is a holy artifact, the Books of G'aree Gy-gaks.


The village of Ghola lies in territory whose dominion is disputed by both the British Empire and the French Second Empire. Both nations send small patrols to investigate reports of Galforrian meddling and to remove the Books which seem to be the focus of all the trouble. The Galforrians, meanwhile, are trying to whip the locals into a frenzy to protect their sacred objects.


There are three sides: British, French, and Martian.


Terrain is minimal - the village of Ghola lies in the midst of a large basin. Water comes from the village well.


In the center of the table is the village. It is protected by a few low stone walls which are in poor repair and have large gaps. The Martian forces deploy in this zone.


British forces enter from the southwest; French from the northeast. Both must deploy no more than 16 inches from the corner they begin in.


British: 5 points for seizing the Books and removing them from the table; 5 points for each Emerald Legion unit destroyed, 10 points for driving off the French.


French: 5 points for seizing the Books and removing them from the table; 5 points for each Emerald Legion unit destroyed, 10 points for driving off the British.


Martians: 5 points for each Earth unit destroyed or routed off the table; must keep the Books from being removed from the table.

The Aftermath:
We are going to play using regular G.A.S.L.I.G.H.T rules (not Battles by...). After the game, I can make available the forces - I want to keep them secret for now. Jim reads this blog, and he's playing in the game.
I will take several photos during the game on Friday night, and shall promptly publish an after action report for the newspapers to ruthlessly plagiarize. The scoundrels!
Posted by J Womack, Esq. at 9:47 PM No comments:

Been a bit since last I posted, I know. Been hellish busy, to be honest.

Looking ofrward to a game with Jim next Friday night. We'll take photos and provide an After Action Report here.

Off to a wedding right now, I'm afraid.

Repairs to the Landship

The landship, which you may remember was damaged by a drunken Scot, has nearly finished completion of repairs. The damaged weapon is being replaced by a new flamegun mounted in the port side sponson. This astounding new technology will sweep the port flank of the landhsip clear of any infantry with a sheet of burning gashant-oil.

Unfortunately, due to space limitations inside the landship, the fuel tanks were forced to be mounted outside the vehicle .

Also, the crew refused to enter the vehicle while that much flammable liquid was inside with them and a boiler.

On the plus side, if it gets hit, the burning liquid should remain on the outside of the vehicle, and may actually increase the boiler temperature, improving speed as the landship rushes to safety.

Photostats will be presented as soon as repairs are finished.
Posted by J Womack, Esq. at 12:16 PM No comments: