Colonel O'Truth is at it Again.

Good Gracious! More! The Faraday Gun already done, and mounted on a carriage! At this rate, the Hun hasn't a chance to keep up with British Progress! Huzzah for the Colonel!

Colonel O'Truth's Miniature Issues: Continuing The Silliness...: Hi, All! Faraday Gun... I'm rather pleased with this one! My third post of the day! Good gracious me! It's been a productive day in ...

[Editor's note: If I win the lottery, I am hiring the Colonel to build all my toys.]
Posted by J Womack, Esq. at 6:02 PM No comments:

While explorers on Venus in My VSF Universe have not encountered these Cytherean Amazons, reports have been filtering in via another blog.

Colonel O'Truth's Miniature Issues: A Bit of Silliness...: Hi, All! The "Faraday Gun" in production... Two posts in one day! Whatever has got into me? I took a break from HMSW Gargantua last ...
Posted by J Womack, Esq. at 7:38 PM 1 comment:

One of the things I have been upset with for the last year or two is the lack of progress I have been making on my (many) gaming projects. I have let that get me down, and that has led to me not feelign like doing anything. In other words, I am not doing anything because I feel bad that I am not doing anything. The strange effect of the doldrums, I know, but there it is. I think the sentiment is a common one in our hobby.
One thing that might help would be to set specific, achieveable, short-term goals, rather than having innumerable, never-ending 'projects.' So that's what I am going to do. And, I will chronicle them here, and try to keep my faithful readers up to date on progress. It may not be as glamourous as the sweeping flights of creative fantasy that I have posted here. Heck, I know it isn't. But it may get the creative juices flowing again.
By the end of February, I want to have done the following:
Not much to start with, but there is only about a week left. I will be very happy to accomplish these goals in that amount of time.
Posted by J Womack, Esq. at 10:43 AM No comments:

One of the most ambitious scratch builds I have ever seen. Just... awesome.
Posted by J Womack, Esq. at 8:13 PM 1 comment:

28mm Victorian Warfare: Naval Brigade Gatling Gun: Another abandoned project finally sees the light of day and jolly glad I am too. I seem to talk myself out of attempting anything new, wor...
Posted by J Womack, Esq. at 7:54 PM No comments:

Manufactured by Fiendish Fabrications, and available here. I think the Admiralty will be purchasing some of these for their airships as well. 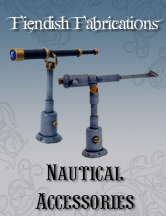 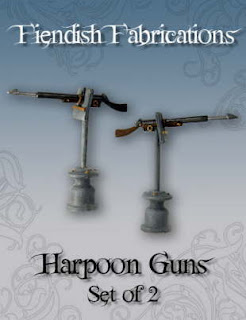 Fiendish Fabrications has been making some very interesting items lately. Definitely a company to watch if you are a steampunk or VSF (as I prefer) fan.
Posted by J Womack, Esq. at 7:52 PM No comments:

One stinking post in January. One! The worst month I have had since starting the blog, I think. The problem is that I spend too much time doing other things besides playing with my toys and dreaming up new and unusual ways of creating anachronisms.

Heck, I haven't even been trolling for new mini ideas lately. The only game related thought I have had all week was on the way home from work I thought about my stalled 6mm project for WTNW and about how I am going to have to miss OwlCon this year (Austin for my son's rugby game, much more important, but still an irritating scheduling conflict). The thought for my project was that I could play it on a board that I got from a fellow named Dan (better known around TMP as Cacique Caribe). Beautiful boards, I know I have shared photos of them previously.

And the Aethergraph, just languishing there, waiting for the new edition to come out. Show of hands, how many of you miss the old girl? Don't even get me started on the backlog of editing I have to do.

Why do I wonder why so few people follow this blog anymore? Its nothing but self-indulgent whining. It used to be entertaining and informative. Is the magic gone? Should I pack up shop and move everything lock, stock, and barrel over to my other blog, which sees a little more action? Another poll idea...

So a couple of polls, and trying to get my head on straight. Thanks for bearing with me. Its been a rough six months or so.Once I get some more painting and ideas rolled up, I'll post more.
Posted by J Womack, Esq. at 7:30 PM 3 comments: