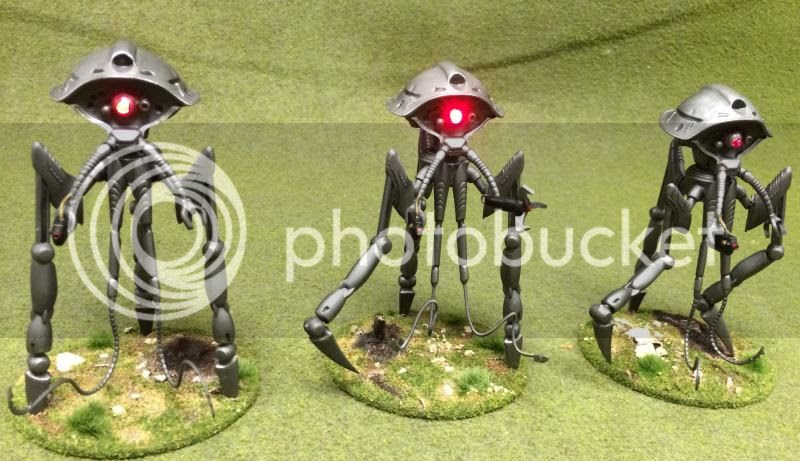 These are scout tripods from Alien Dungeon for their All Quiet on the Martian Front game. I saw this photo (and several more) on TMP. The work was done by Scott Washburn, adding what looks like small red LEDs into the head of the plastic tripods.

Really great job there. I just thought as many people as possible ought to have a chance to see it! Mr. Wells would be proud. Horrified as well, but certainly proud!

Problems with Society of Thule Figures?

I finally got around to opening the box of Society of Thule figures that I pre-ordered. As I am cleaning them up to get them ready to prime, one thought just keeps running through my mind:

Did anyone else get a set of figures with a TON of flash? Far more than I have seen on any metal figures in years. The other sets I purchased were not so bad as these - Lord Curr's Company and Servants of Ra, both purchased at the same time as the Society. These are awful, practically lousy with it. On bases, on hands, knobs of lead, not just little streamers... and webbing between body parts (neck and shoulder, within the arms of a firing pose), too. This is the kind of quality we used to get in the 1980s!

Maybe NorthStar shot the molds for Society of Thule out faster than the other sets, I don't know. And I have been able, so far, to fix everything with some knifework and filing. It's just not something I am used to having to deal with any more.

The sculpts themselves are lovely. It's just the casting that has me bummed out. Did anyone else have this problem?
Posted by J Womack, Esq. at 12:16 AM 4 comments:

With a great many thanks to the contributors who made it possible, I have finished putting together the newest issue of The Aethergraph.

The link to the left should be active. Or you can go to it here.

As always, please let me know what you think. Work has already started on Issue 3, and I hope to have it out before the end of the year. This would be a record for me. Of course, if I keep getting more submissions, it could possibly stretch to four issues in 2014... but let's not get too ambitious just yet.

Email ThisBlogThis!Share to TwitterShare to FacebookShare to Pinterest
Labels: Aethergraph

Rob Angell of Curious Constructs is taking part in another Kickstarter for 28mm heavy equipment suitable primarily for a Game of Grim Warfare Set in the Far Future.

However, his focus in that game is on the troops of Praetoria, who exhibit a distinctly neo-Victorian aesthetic. And so, they are quite nice for fans of Victorian Science Fiction, such as myself.

I had been aware of this project for a few weeks, but had not really looked into it. Then I saw a posting about it elsewhere with a piece that I simply had to have. So I am now backing this project. The usefulness of the pieces - for me, in particular, the non-weapon pieces - is just too much for me to not order. In particular, I mean the searchlight and the barrage balloon winch. I envision these as a galvanic heliograph and an airship tether respectively.

Should you be interested, the Kickstarter project has still a few more days until it funds. You may find it at this location.
Posted by J Womack, Esq. at 11:21 PM 1 comment: