If you make your own models, or convert models, or just like to customize models some, and you have ever needed tentacles or cables, this tool might be for you. It is called the Masq-Mini Transparent Tube Tool, and it looks really easy to use with some pretty good results. 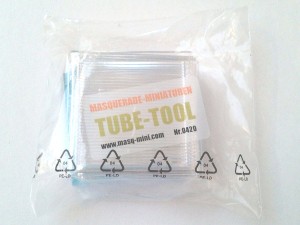 You can read a review of the tool on Graven Games' blog. Which, incidentally, is where I got the images you see here. 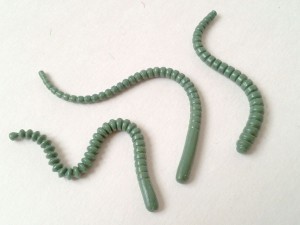 The following photostats show a new set of handwavium crystals. The green rock powers the most amazing of modern technologies by providing intense heat without consuming oxygen. 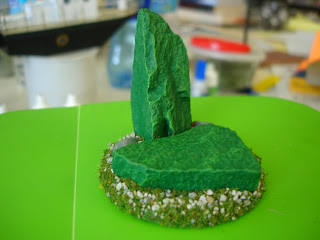 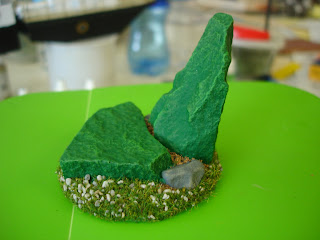 [Editor's Note: This is a new set of resin crystals my sons bought from Acheson Creations a few years ago at Historicon, I think. I saw it sitting around, and just decided to finish it. Very handy for VSF terrain and objectives.]
Posted by J Womack, Esq. at 10:58 PM 2 comments:

I saw these while bouncing about the internet. Thought they might be of interest to some folks, especially the bug tank. They are from Micro Art Studios. 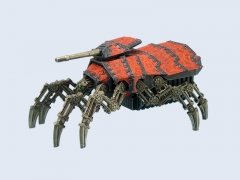 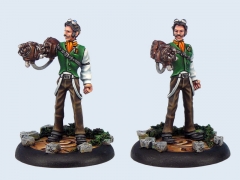 I threw in a couple of other pictures of stuff I am working on while I was at it.
Posted by J Womack, Esq. at 12:57 AM 6 comments:

The People Have Spoken!

And thus, the heretofore unnamed scout Aeronef shall henceforth be known in the RNAS rolls as...


Work is nearing completion on this project. I have installed the rope railing around the entire deck, attached the lower hull to the upper, and the tail section as well. The Nordenfelt has been mounted, the white ensign attached, and very little still waiting completion.

I was just checking out Frank Chadwick's Space: 1889 blog, and noticed that Victoria's Boys in Red is mentioned in his links.

Yes, I think it is cool that the guy who wrote the game that got me interested in VSF in the first place oh so many moons ago knows about my little blog.

Email ThisBlogThis!Share to TwitterShare to FacebookShare to Pinterest
Labels: out of character, Space 1889, VSF

A few shots to see what has been going on. I decided to go with the rope and stanchion railing as suggested by the poll. The first photo shows how I did it. Simply, it is some 1/16" brass tube cut with a razor saw to about 20mm lenght, inserted into holes I drilled in the model with my Dremel. To that, I used superglue to attach some beading cord that looks like braided manila. I had thought to use some small brass rings glued to the stanchions and then run the cord through them, but could not find any that I liked well enough.

You may note the change in color scheme. I decided to match a historical pattern of the Victorian Royal Navy, with black hull, white superstructure, and yellow ochre stack. Also, questioning the use of ventilators. It came with a pair, but I don't know that I want to use them.

The tail I am considering painting a blue-white-red roundel upon the upper half. Also need to figure out how to do a decal for the name - which I need to decide upon! Check out the poll for that, please!


Changed the lower hull plan from the original idea. Originally it had two resin portholes on each side, but the starboard pair were damaged at some point, so I cut them all off. Then I added round gunports over the four portholes, going to fit each with a Hotchkiss rotary cannon. But once I looked at it, I decided that it was over-gunned at that point. Cut off those ports, added a washer to each side for a single porthole - that's the engineering area, not a passenger lounge, after all!

Plenty of work still to go. Need to finish cutting the stanchions for the main deck's railing, finish painting the deck gun and the Nordenfelt for the pilot house deck, need to make a hatch for the roof of the pilot house, finsih painting the details, and then there is asssembly! Oh, and a line for the ensign, of course! I was thinking smokestack to rear of the armoured boiler box. I've some small-ish eye pins I could set in for that.
Posted by J Womack, Esq. at 3:44 PM 4 comments:

She needs a name! I've started a poll to help, but not sure I have all the names that I liked on it.

Wikipedia lists all the gunboats of the Royal Navy here.

Vote in the poll, and if you chose "Other", give me the name in the comments here, please.
Posted by J Womack, Esq. at 3:24 PM 3 comments:

From Agent Skrapwelder, we have received this item: a French mechanickal walker! Apparently, napoleon III has decided to get involved in mechanickal warfare, probably at the urging of his Minister of Science, Jules Verne. Better late than never, and an excellent first piece. 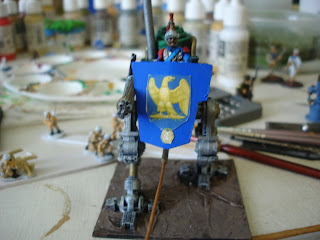 As you can clearly see, this two-legged, steam-driven device is fitted with a heavy armour glacis plate, and armed with a Gatling-style machine gun and a spar torpedo underneath. The open cockpit provides the cuirassier piloting it with excellent visibility, while still able to duck behind the thick glacis for protection. The device on the shield is from His Imperial Majesty's coat of arms.

[Editor's Notes: This was converted from a GW Sentinel by Skrapwelder. I purchased it from him about two months ago, and repainted the shield to my taste. The rest of the work, minus a few paint touchups here and there, is all his. It is the first piece of 28mm VSF I have for the French.]
Posted by J Womack, Esq. at 1:54 PM No comments:

I'll be back tomorrow with some updates on the scout aeronef.
Posted by J Womack, Esq. at 8:18 PM No comments:

I was perusing the telephonic differencing engine web this fine Saturday morning, simply gadding about, you know, when I came across a few mechanickal designs that interested me. I believe the attached photostats will give you an excellent idea of what is made. They come from a "Cygnar," which certainly sounds French to me. That, and their somewhat medieval-gothic design also reminds me of the sort of thing the French would admire, a throwback to the days of chivalry and all that.

The medieval nature of this automata (or is it, perhaps, piloted?) is evident in not only the design of the 'head', but also the weaponry chosen. The long (probably galvanically charged) spear would be quite dangerous if it were to get close enough to one of Her Majesty's landships or armoured walkers, and the heavy defensive shield would provide some protection to allow it to get close.


This lighter "Minuteman" machine is obviously quite speedy. Armed with a pair of light cannon and six (!) mortars mounted in the shoulders, I can imagine it would be effective assaulting an infantry position. The downward pointing vents also hint at some sort of limited flight capacity, or perhaps are a braking mechanism for an assault by airship?

The last machine which I shall discuss today is the "Cyclone," so-named for the storm of bullets it appears capable of delivering. Twin rotary guns mounted under each arm would enable a veritable hailstorm of lead to pour forth from this fiendish device. Imagine the slaughter if our noble cavalry were to be found in the open before this monstrosity! Happily, it is a slow beast, and not as well protected as the Lancer. Still, it is sure to dominate any battlefield area in which it is given an open field of fire. I would suggest targeting the Cyclone with artillery until it is eliminated.

[Editor's Note: All three of these are available from Privateer Press for their Warmachine game. I cropped the photos from their website. No challenge is intended. I just like showing off neat minis and thinking of ways to use them in VSF games. I need to pick these up when I get started on the French. Maybe before then, so they don't go out of production before I am ready to go. Could be used as piloted for 15mm, surely, but not sure about it for 25/28mm - probably have to be automata in that scale.]

I recently obtained a 25mm scale Scout Aeronef, made by Ironclad Miniatures, from someone on TMP. The casting looks very nice, but has a few flaws. The worst of these was the portholes on one side of the lower hull were about half gone. I don't know if it was a casting problem, or if they were chipped at some point afterwards. Either way, they were not going to work. So, I got creative.

Here is my 'creative' solution: I cut off all four of the lower hull portholes and replaced them with these plastic fittings. The fittings are from my wife's O2 tanks, and I have been saving them as I could for something just like this! However, these do not match the perfectly good portholes on the upper hull or superstructure. So I decided they would be gunports instead! 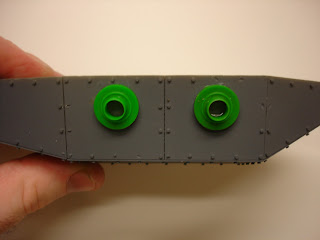 The plan is to make a set of four revolving barrel cannons to protrude from the gunports. 3-pdr Hotchkiss Revolving Cannons for a broadside armament! Huzzah!

I had to do a few other minor repairs to get started, but the project is on! I should finish in a few weeks, as I am easily distracted by other projects and a massive "Honey-Do" list from the memsahib. Silly me, I thought that I had the summer off from work, being a teacher and all!

Oh, does anyone recognize that piece in the background? It is not going to be fitted to the scout aeronef - too heavy. But it will see use.
Posted by J Womack, Esq. at 1:04 PM 7 comments: