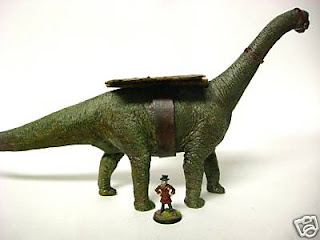 Remember, good readers, that you heard the news here first.

It appears that at least one of the giant herbivorous dinosaurs of Venus has been tamed and put to serving Her Majesty. My scientific assistant tells me that the beast in question is undoubtedly one of the great saurupods, probably brachiosaurus, but perhaps apatosaurus. Difficult to distinguish from the photostat.
From that high perch on the howdah, Her Majesty's troops can safely move through the teeming jungles of Venus without worry. I am hoping that the man who trained this remarkable beast shall be prompted to train additional dinos for purchase at auction.
I apologize for the paucity of posts again this month. This time illness, and not crushing workloads has been the main malefactor. I've been flat on my back for the best part of two weeks now. But I am improved, and hope to post more in July. Watch for a new monthly poll very soon.
Posted by J Womack, Esq. at 2:00 PM 2 comments:

A tie between the Tsar and the Republic. Very interesting.

I already have some Texicans bought and painted. That's old news, but I need more. A trip to Little Wars (a fine retailer and the source for Freikorps in North America, and its on the other side of town from me! Hurray!) next week may be in the offering. On second thought, what with the current cost of gasoline and the hour to 90 minute drive to get across town (Houston, as capital of the Republic, is rather large). it might be less expensive to have the figures posted to me. I used Freikorps' Spanish-American War figures, by the way.

What figures to use for Russians of the late 1800s though? Crimeans would be too early, I think. I'll have to do a little research and ask about on TMP.

The Holy Father will definitely have a mission on Mars. Must set to work converting the heathens and all that, what? And naturally, he'll send a few good Catholic boys along to protect his missions. So, Papal Zouaves or somesuch, I think. The Zouaves should be simple enough. Just need to find a good ACW or FPW 15mm Zouave. Monks, on the other hand, I don't know a source for. I'll check Freikorps or LKM's Ancients line. Perhaps something will be there.

Japan and Belgium tied for second place. Not sure if I will do them in 15mm. I suppose some Boxer Rebellion Japanese infantry would work for rank and file. But I do like the look of the Japanese soldiers and the 'smoke-stalkers' put out by the London War Room under the Parroom Station line in 25mm. So there's a likely unit or two as well.

Poor little Austria (which was not all that little back in the late 1800s, if you recall your history) came in next to last. It was a fairly major empire then. So we may have to make room for them as well on Mars. Or perhaps Venus? The Imperial Germans have a fair presence there. An early attempt at Anschluss, perhaps?
Posted by J Womack, Esq. at 11:33 PM 2 comments:

Email ThisBlogThis!Share to TwitterShare to FacebookShare to Pinterest
Labels: Empires, out of character, Papal, poll, Texas

News as it happens.

Received today a shipment from a popular auction house. In the package were five pieces of absolutely stunning model terrain. The craftsman responsible advertises his auctions frequently on TMP, and goes by the name of Battlefield Architect there. His alias in the auction house (e-something-or-other) is, if I recall correctly, enjar.

I purchased the items as a bit of a test, as I have seen his work previously on numerous occassions. It is very nice stuff, looks marvelous and seems sturdy. There will be additional orders in the future, as finances permit.

In other news, I am off work for the summer, so hope to accomplish many things in the next two months. Perhaps even make a dent in the backlog of projects. Many things half-purchased. Perhaps a poll of opinions - a short poll, as I don't wish to wait for the end of the month to have my data!
Posted by J Womack, Esq. at 11:18 PM No comments: