An excellent Film for Steam Enthusiasts

Though not perhaps suitable for the ladies or the young.

An excellent portrayal of stema technology that ends up with a Frenchman getting his comeuppance at the hands of an English gentleman. Naturally.

I have been neglectful of both my journals in recent weeks. Many reasons for it, but I shall endeavor to be more diligent with them.

Another excellent telephonic engine location to peruse for useful items is at www.warflag.com. I found many beautiful flags there with which to equip my miniature forces. And best of all, they are free of charge!
Posted by J Womack, Esq. at 11:57 AM No comments:

Ladies and gentlemen, the results are in.

We really do like the redcoats better than the eminently more practical yet completely un-stylish khaki uniforms which the Horse Guards keeps nattering on about. You would think the buggers had stock in Indian khaki cloth factories the way they prattle on about how marvellous the stuff is. Hmmm, perhaps a Parliamentary inquiry should be made...
That khaki stuff may do for our native troops - after all, who can blame them for lacking an Englishman's innate sense of style, propriety and civilised dress? Not their fault they're foreigners, what?
Red was the plain winner in the scientifically run poll. Wide margin of victory, which eliminates all doubt as to which is preferred by the public.
So, there you have it. You heard it here first.
Posted by J Womack, Esq. at 8:38 PM No comments:

More Photostats for Your Pleasure

And no, gentlemen, no scantily clad ladies of negotiable virtue.

But I do have a few photos of that fiend Professor Otto Maton (Parroom Station Clockwork Master) and part of his steam-powered horde of dangerous autonomous devices (Wyrd Miniatures Steam Spiders)! Unfortunately, the brave soul who snapped this photostat was found dead the following morning. Thankfully, he managed to send the photoplates to me first. 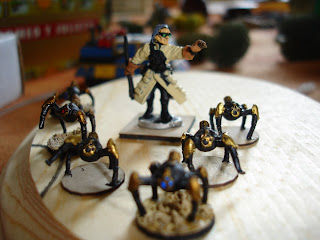 We also have here a shot of a work in progress, and near completion: an askari/sepoy/tiralleur martien NCO (depending on which nation he is enlisted to serve) (RAFM Space 1889 Martian Sepoy NCO). Only eighteen of his fellows to go. Notice the utilitarian khaki uniform, guaranteed to blend in with any nationality. Their service shall be quite 'flexible,' don't you think? 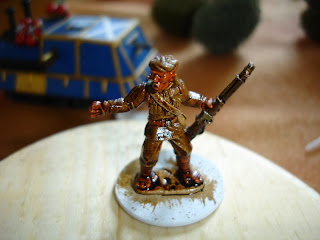 Finally, a last work in progress, and just barely started. This is Herr Major Hans von Clarkopf. The Herr Major is the second-highest ranking German officer on Mars, and is known to be working with the Kaiser's allies, the Galforrians, as a training officer. It is the supposition of Her Majesty's Special Services Department of the Foreign Office that Herr Major is also expected to take field command in certain clandestine operations for the Fatherland. A close eye shall be kept on this goose-stepping troublemaker, I assure you! 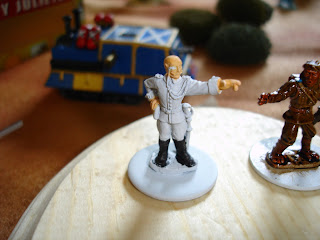 Okay, so maybe just one photostat of a lovely young lady clad in a most immodest manner. But nothing you should have to shield your child's eyes from! This is a (mostly) respectable journal, after all! 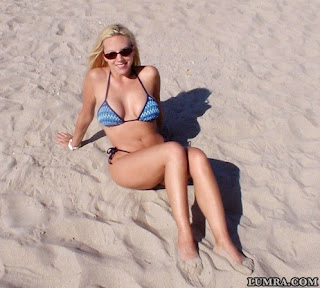 That shall be all for this evening, my friends. Work continues apace, and I must hasten to my rest for the morrow.
Posted by J Womack, Esq. at 10:26 PM No comments:

Egads, but it certainly appears that I am using far too many labels. Perhaps I should edit old posts to consolidate the label archives?

Bah, its late and I am tired. Perhaps in the morning I shall be bothered to do so.
Posted by J Womack, Esq. at 2:12 AM No comments:

Gentlemen,
News of a new 25mm offensive by the Hun has prompted painting. A German officer, Count Hauptmann Otto von Sickle (Parroom Station) has been seen training Martian askaris (19 x RAFM Space 1889 Martian Sepoys). Her Majesty's government will certainly be watching this development with care, as we have no wish for those dastardly devils to interfere in our legitimate colonial entitlements! The very idea!

To that point, 20 miniatures of 25mm scale have been mounted on steel washers and primered white. A bit dull still for photographs, I think. These shall become red Martians in a wonderfully non-colonial-power-specific kharkee uniform. And, of course, a dashing, bald, monocled (aber naturalische!) Prussian junker to command them in dictatorial style. While I am enamored of the miniatures produced for the Space 1889 line, I am still not convinced of the ochre Martian. Perhaps if I ever get those boxes of High Martians, they may have the traditional ochre-hued skin.