Progress Marches On Across Mars

Telegraph Line Connects Victoria Landing and Syrtis Major
After months of intensive labor, British engineers have pushed a line across the trackless desert wastes of Mars. Across the red sands, a line of timber crosspoles springs up, strung with miles of copper wire. And along this wire, a message is sent:
"Hello VL. This is SM. Are you receiving?"
Yes, the first long-distance telegraph in the history of Mars. A day that will go down forever in the annals of progress! Truly a triumph of superior British technology over the wilds of the Red Planet.
Photostats of the telegraph lines will be provided once our correspondent returns with the camera. Incompetent dolt. If he weren't my wife's nephew, I'd...
[Editor's Note: I have finally gotten the set of telegraph poles just about finished. Once I flock the bases of the last four, I'll post pictures. If you are interested in how I made them, check out my gaming terrain blog, www.gamingterrain.blogspot.com.]
Posted by J Womack, Esq. at 5:17 PM No comments: 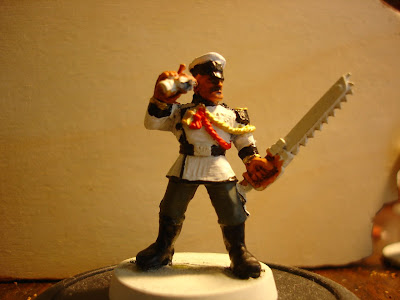 Good readers, as you can see, we have received a photostat of a potential new tropical uniform for the Kaiser's dreaded Ätherbattalion troops. This officer sports a white tunic with black trim, feldgrau trousers with black trim, and black leather equipment. If you look closely, you can see the gold lace around the cuffs and epaulets, indicating this is an officer. The red and gold aiguilettes indicate an officer of the KFG, leading troops armed with weapons of incredible technological capacity for destruction. This particular officer carries a Kettenschwert, or 'chainsword,' and some sort of miniaturised spyglass.
[Editor's Note: This is another Mordian Iron Guard figure from GW. In their universe, he's a lowly sergeant, but such a resplendent uniform deserves promotion, so I made him an officer. Obviously, he's not finished yet. He's another repainted eBay purchase, as well. Anyway, I though I'd throw together an example of the white blouse/black trim option that is on the poll. I also tried a white trouser/gray tunic/red trim variant, but I am really not happy with it, so that's not going to happen. It looked very Russian.]
Posted by J Womack, Esq. at 9:34 AM No comments:

So, the big question is this: feldgrau blouse or white blouse for enlisted men?
First, the feldgrau blouse, with red trim. No, this miniature is not finished, and yes, it is a GW Mordian Iron Guard mortar crewman. The Imperial German Secret Weapons Institute is developing such a terror weapon. The large brass shell holds a fair amount of incendiary chemicals. 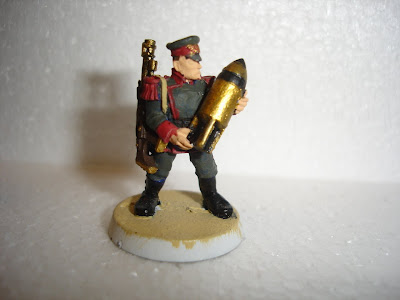 Second, the white blouse, again with red trim (which I am not totally sold on). I really like the contrast here, and the seebattalion troops on which these fellows are very loosely based wore white blouses. This is a re-paint of a mini I got via eBay. 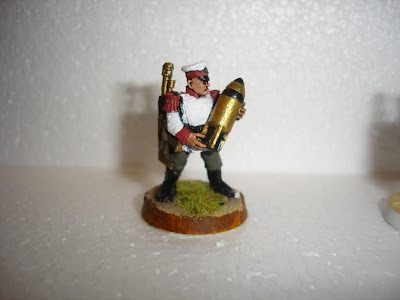 I'm afraid the white blouse makes them look too colonial Russian and not Imperial German enough. I kinda like the red trim, intended to indicate Mars service. But what if I want to use them on Venus as well? Yes, I care, and no, I don't want to paint up two sets. I guess I could go with a black trim, to indicate Ätherbattalion service, as part of the Kaiserlichätherischflotte (Imperial Æther Fleet), rather than to indicate any specific planetary force.
Officers are in white blouses, by the way. I know it makes them easier to spot on the battlefield, but it has a certain panache that I love.
Anyway, please vote on the poll at the top of the page. It's only up for a week, so please hurry!

Email ThisBlogThis!Share to TwitterShare to FacebookShare to Pinterest
Labels: German, out of character, Painting, poll

For those of you not regular readers of The Miniatures Page, I have very sad news. The daughter of Jim and Melissa Ludwig of Dark Sword Miniatures passed away. Lillian Ludwig was only 100 days old, and a beautiful little girl.
I nearly lost my youngest son a couple of years ago, and so I have the barest inkling of the sorrow the Ludwigs are feeling. I can only offer my deepest sympathy for their loss and most heartfelt prayers for them and their family. I hope that God will grant them peace and that after their grief has passed they will be left with fond memories of Lillian to cherish.
Here's my advice: Go give your kids a big hug and tell them you love them right now. That's what I am going to do.
I'll be back in a day or two.
Posted by J Womack, Esq. at 4:42 PM No comments:

Additional Journals to Check In On

I know that your time for perusing finely crafted articles via the telephonic difference engine weave is limited, but I do recommend that, after reading this fine publication, you might find interest in the following journals.

Both are full of interesting information and tales of derring-do.
Posted by J Womack, Esq. at 7:42 PM No comments:

Word has reached the Journal that additional troops bearing secret weapons from the Kaiserlich Forshcungsanstalt fur Geheimewaffen (KFG), or Imperial Research Institute for Secret Weapons, have arrived on the Red Planet!
Reliable sources from Neu Berlin have informed me that almost two platoons worth of these troops arrived very recently. Fortunately, they are not yet ready for deployment in the field, and word is that it may be weeks before they are prepared.
Rest assured, good readers, this Journal shall keep you informed of any change in the condition of these troops and their diabolical devices of dastardly devastation.
[Editor's note: I just got in the mail 17 Mordian Iron Guardsmen, from Games Workshop. Well, not directly from GW. I got them from someone on TMP. Fast shipping too - thanks! Anyway, I have to get bases for them, and then get to painting, and so on, so it will be a bit before they are ready to go. I did get an officer and a sergeant, plus... well, you'll ahve to check back later to see what else!]
Posted by J Womack, Esq. at 5:10 PM 1 comment:

Now that is out of the way... man, I did okay on the Pledge, but not near as well as I started off. I can tell where I got behind, and it was where I thought I would really get ahead. Last summer. So, it looks like I just about broke even on 15mm, but I was way off on 25mm stuff. Well, hopefully I'll do better this year... look for the new Pledge '09 soon. Think I should include the stuff I got for Christmas?
The poll results are in for December. Not a widely supported poll, I grant you, with only 14 votes. But I made up my mind somewhere near the halfway point that I was going to use the lance armed fellows as the 'regular' deathray cavalry, with a few carbine armed guards. The lancers also carry pistols. And I think their lances will have the 'spar torpedo' option for anti-airship operations.
We've got a good series of articles in the last two or so months from Jim, about the beginnings of Texican settlement on Venus. I wonder how much longer before Texican civilians will begin to appear to develop the colony? I need to get to editing and cleaning up his latest posts, though.
All in all, I am fairly happy with the last year, but look forward to more gaming hopefully this year. A trip to Historicon may be in the works as well, and I am looking into New Orleans area conventions as well. If I get enough work done, I may even run a couple of small games at either OwlCon, AggieCon, or MilleniumCon XII this year. Only time will tell...
Thanks for reading the blog. I hope we keep you guys and gals entertained for another year.
Posted by J Womack, Esq. at 9:36 AM 1 comment:

Email ThisBlogThis!Share to TwitterShare to FacebookShare to Pinterest
Labels: convention, holiday, out of character, Pledge, poll

Although it is a Thursday, rather than a Sunday, we are taking a break from work in order to celebrate the New Year. It is hard to imagine that in a short time, the 20th century will be upon us. I wonder if the fortune tellers are correct with all of their theories of the world coming to an end in 1900? Thankfully, we still have a few years until that day arrives. I also wonder if, since we are on Venus and not Earth, are we safe from “The End of the World?" I suppose that's a question only time can answer.

The Plant-man corpse we brought back to base for study has wilted like a plant, and its blood is white and milky like a thistle or milkweed's sap. Doctor Armstrong has worked tirelessly, but complains about not having a microscope handy. He is concerned the specimen may wither away completely before he can complete his study of it. Herbalist Dempsey is sharpening his botanical knowledge - or would it be biological knowledge? Either way, he is learning a great deal about comparative anatomy from Lieutenant Armstrong.

Drs. Caruthers and Palmer will finally return to their exploration of the temple tomorrow, but with a larger security detail. Before we started the holiday stand-down this morning, all of the men, both Army and Marine, were given a briefing on the plant-men and were warned of their means of attack: ambuscade (literally a 'bushwhacking', if you catch my meaning) and that weird paralyzing scream. We have also discussed having more dogs sent to us from Earth as apparently they are able to detect the creatures before we are. Lady V will accompany the men to and from the temple worksite. In addition to helping with security at the site, she will be able to practice her digging skills out there, and for once, I shan't have to fill in her holes! Besides, every little bit helps, right?
Posted by RSM Cox at 5:34 PM 1 comment: