A gathering of individulas indulging in a collective appreciation of steam, and dystopia. A steampunk convention, in other words. In the citadel of dystopia: Seattle, Washington. I think it is the rainfall that does it.

There shall be gaming as well: Steamcon Games.

Perhaps even I shall be able to attend. It all depends on how well my new privateering investment pays off.
Posted by J Womack, Esq. at 10:56 PM No comments:

So there I was, innocently browsing through my dashboard, checking out posts on the many blogs that I follow. And what do I see? A little bit from Colonel Gravis talking about how he has a guy selling castings of his parts in the US through Bartertwon. "Cool," thinks I. Click on link. Find following awesomeness: 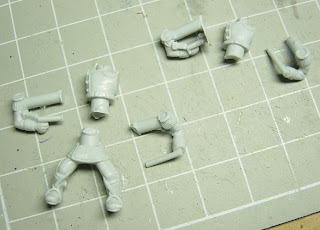 One of the things I have wanted for a bit was a set of rider legs and all to make Praetorian/British VSF riders. Now all I gotta do is buy them, get some gashants, and assemble and paint them. Somewhere around 2030 ought to be the appropriate time table. But how cool is it?!?! Way cool is the answer, my friends. Way cool.
And then I saw this: 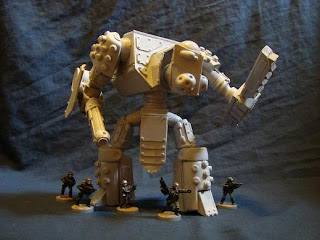 Remember Epic? Remember the Imperial Knights, kinda like miniature Titans? This is a resin Knight Paladin done in 28mm scale. Fracking huge, and I have no idea how much it costs. But this would be the kickest-ass major bad mojo for Doctor Maton EVER. Big time OOOO Shiny moments going on here.

And I swore I wouldn't buy anything more until Historicon. Must. Resist.

You can find more info about these here: Bartertown Link
Posted by J Womack, Esq. at 7:30 PM No comments:

Progress has been slow. Hope to have the first issue out by the end of the month now. As far as a schedule for releases... well, think more bimonthly or quarterly than weekly.

What's going to be in it? Well, the first issue will have several things.

I hope it turns out the way I think that it will. Time will tell.

Oh, and if any of you have any artwork or fluff pieces (or fiction) or rules that you like for your games, please let me know. You can email submission ideas to me at aethergraph@gmail.com.
Posted by J Womack, Esq. at 2:35 PM 3 comments:

Email ThisBlogThis!Share to TwitterShare to FacebookShare to Pinterest
Labels: Aethergraph, out of character

Hello ladies and gents.
Inspired by my friend Eli's discovery of StarFrontiersman and the PDF fanzine produced by them, I am working on a fanzine fo my own for VSF. I've titled it The Aethergraph, and I hope to have Vol 1 Issue 1 ready in a week or so. trust me, I'll let you know.
If any of you have any ideas, please let me know. I am planning on including a variety of articles, some as semi-regular features. Short fiction would be considered, and artwork would be greatly appreciated. battle reports and photos of battles would be great as well. I am hoping to get Issue 1 to about 8 pages. for now, I am using a newsletter style template from MS Publisher that I tweaked a tiny bit. I'll be printing to PDF and posting in the margins for download.
For now, no advertisements or anything, except for plugs of figures used and such. I have used some images from manufacturer's websites, but am seeking permission for using them before publishing.
Posted by J Womack, Esq. at 12:18 AM 3 comments:

How much interest is there in some 15mm flying Martians, both on foot and in flight? This is a project I and a few others would like to see happen. I could go as many as 200 eventually, though probably start with a more modest 100 or so, split 50/50 flying and on foot.

Email ThisBlogThis!Share to TwitterShare to FacebookShare to Pinterest
Labels: 15/18mm, Mars, out of character, VSF

Herr Doktor Professor Otto Maton
Mechanickal Genius
Aspiring Autocrat
Early Life
Little is known of Otto Maton's childhood. It is a matter of public records that Otto Maton was born to Franz Maton and Louise (Bissell) Maton, in the town of Bressoux, near Liege, in the Wallon region of Belgium in 1831. He is recorded as having attended the University of Liege and scoring excellent marks in mathematics and the sciences.
Adult Life
Maton continued his education in Paris, London and Berlin. He worked briefly in Great Britain, developing more powerful steam engines and efficient pistons, and perfecting his galvanic ray projector. He then moved to Berlin, supposedly becoming a professor at the university, but actually working as a project director for the KFG.
While at the KFG, Maton developed a larger version of his galvanic ray projector. He also became interested in automatons, and developed his first small spider-styled devices then. The "professor"also used his fiendish genius to provide the Kaiser with flying troops, thanks to his clockwork-driven personal rotary flight apparatus. However, it was during his stay at the KFG that Maton began his descent into megalomania and the desire to dominate other humans as he did his mindless mechanickal servants. 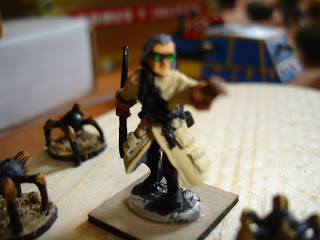 Otto Maton, with a few mechanickal spiders, on the floor of the KFG main production facility
One of very few existing photostats of the Mad Belgian
After several busy years at the KFG, Doctor Maton was discovered developing an army of mechanickal devices programmed to be loyal only to the Doctor and not to the Kaiser's officers. This, of course, could not be permitted! With three battalions of Prussian infantry closing in, Maton was forced to flee. Before departing, Maton destroyed his laboratory and all of his diagrams and schematics - those he did not take with him, that is! Several of Maton's human followers went into exile with him, including a mysterious Egyptian man and two women. The women are as different as night and day: one a German hausfrau, and the other a Nipponese geisha.
Bribing the unscrupulous captain of a tramp steamer, Maton was able to make his way to the colony of Bongolesia, in Africa. Once there, the Mad Belgian used his mechanickal servants to secretly mine for a sufficient supply of handwavium. Burrowing suits of armor piloted by a race of pygmies were used to raid the British aetherfield in Suffolk, making off with several hundredweight of unobtainite from the Royal Airshipyards. These two minerals, along with Maton's proven genius for mechanickal devices, allowed him to construct a small aethercraft and leave Earth altogether.
Weeks later, the Royal Navy's HMAS Duke of York sighted Maton's pirate vessel (dubbed the Belgian Runner by the Press) as it approached Mars. When the Runner failed to heave to when ordered to do so by the mighty aetherdreadnought, the Duke fired upon her with a barrage of Cavorite torpedoes. Heavily damaged by the deadly barrage, Maton's craft crashed deep in the Outback, well away from any known source of life-giving water. Maton and his followers were presumed dead, either in the crash or in the unforgiving wastes of the Outback.
Current Activities
Professor Maton's survival was announced suddenly when he launched an attack on a heavily protected caravan of unobtainite in the mountainous Gwan District of the Crown Colony, nine months ago. His attack was beaten back, and no one has heard from him recently, but it is only a matter of time before he and his minions strike again...
Posted by J Womack, Esq. at 1:37 AM 2 comments:

Okay, so I guess I have to ask... what is the consensus on my painting skills. Constructive criticism is the only way to improve, right?

So please vote on the poll, and be honest. If you have comment, please make them here.

Email ThisBlogThis!Share to TwitterShare to FacebookShare to Pinterest
Labels: out of character, Painting, poll

Manchester (63rd) Regiment
History
The 63rd Regiment was formed in 1758 from the 2nd Battalion, 8th (The King's) Regiment of Foot during the Seven Years War against France. The regiment has been a single battalion regiment for most of its lifetime, barring a short period during the Napoleonic Wars when a second battalion was created. The 63rd has served Her Majesty (God Bless Her!) in many theaters of operations, including Afghanistan, New Zealand, and the Martian Crown Colony.
In 1881, as a result of army reforms, the 63rd (West Suffolk) Regiment was amalgamated with the 96th Regiment of Foot into the Manchester Regiment. As with all the regiments, many officers and other ranks still refer to the regiment as the 63rd (it having numeric precedence over the 96th, you see).
The Manchester Regiment was posted to the Martian Crown Colony in 1880.
Combat History
The 63rd has taken part in the Seven Years War, the American Rebellion, the Napoleonic Wars, and the Crimean War. Some of the battles in which the 63rd fought include Bunker Hill (1775),  Brandywine (1776), Monmouth (1778), Guadaloupe (1809), Martinique (1810), Inkerman (1854) and the Siege of Sevastopol (1854-55). More recently, the Regiment took part in the Second Afghan War in 1878. Their services were invaluable in defending the passes of the Northwest Frontier from Afghan irregulars.
Since arriving at the Crown Colony, the 63rd has performed the usual tasks of garrison and patrol duty that occupy a colonial force in peacetime. There have been small clashes with natives, Fenians, and smugglers, but no major battles. The largest skirmish involved the attempt by Imperial German forces to assist a smuggler delivering a clandestine cargo to the German advisors in Galfor. Company A of the 63rd's First Battalion, along with a squad of the R&D Platoon, successfully defended the site of the crashed smuggler's airship. As usual, the entire incident was hushed up and smoothed over through the timely intervention of the Foreign Office's skilled diplomats. 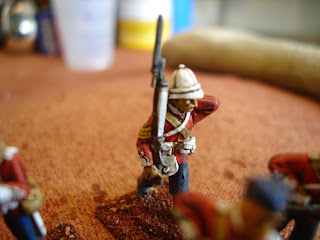 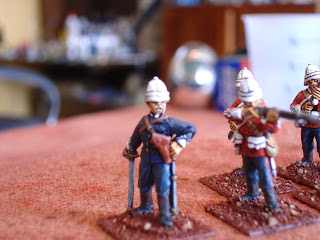 Lieutenant Gorse, Company A, First Battalion, 63rd (Manchester) Foot, wearing patrol jacket
Some officers and men of the 63rd wear either a Glengarry cap or local ulurr straw hat in place of the typical sun helmet. Officers sometimes exchange the standard scarlet tunic/jacket for a dark blue patrol jacket. Officers may also wear riding pants and boots, and most forego the leggings issued to the NCOs and Other Ranks.
Equipment for enlisted men consists of white leather 1879 pattern gear. Enlisted men and NCOs are armed with the Martini Henry breechloading rifle. Sergeants carry a sword bayonet, Other Ranks a triangular spike style. Officers wear a Sam Browne belt and shoulder strap, and are typically armed with revolver and saber. Again, individual officers may make adjustments to their equipment as funds, personal tastes, and regimental command sees fit to allow. After all, the officers do pay for their uniforms out of their own pockets.

[Editor's Notes: These are my new Empress Miniatures Zulu British. They are available in the US from Age of Glory in Maryland.  I really like these figures. I have more, but it will probably be a bit before I get another batch painted. I am concentrating on finishing up the Automaton army in April.]
Posted by J Womack, Esq. at 4:03 PM 2 comments: