I won't bore you with a repost, but you should check out this link to Wargames and Stuff, a blog by a fellow named Brent. I don't know him personally, but he has devised a method of making 1' x 1' tiles that seems very inexpensive (always nice!) and fairly tough. On top of all of that, the instructions are really pretty simple. So, check it out. Kick the tires. I'm kind of thinking about giving his ideas a shot in the near future.

End of the month coming up rapidly. Will I finish my goals? Oh, the anxiety! I am sure you all wait with baited breath to learn the dread secrets of my man cave...

Oh, and for the record, I did not win the MegaMillions on my own. Might have with the pool of tickets from school. If we won, there will be a large number of people calling in rich once we have the money. I think I will get about $10 million in my share, pre-tax. So I should only owe a few thousand once the taxes are assessed... 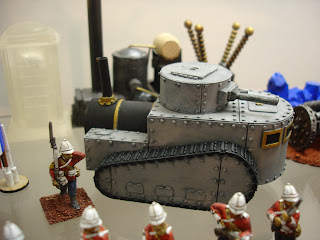 A state of the art vehicle, the Suffolk is powered by a quadruple expansion steam engine, and utilises the Farrington Rotary Track drivetrain. Her armour's thickness is secret, but is rumoured to be able to withstand a direct hit from a Krupps field gun at close range. She is armed with a QF 6-pdr in a powered turret, and a coaxial automatic rifle. Her top speed, like her armour thickness, is a secret, but the Suffolk will certainly outpace the infantry she is assigned to protect.
The Suffolk was produced by Ironclad Industries, who are responsible for a number of innovative landship designs in recent years. In their system of designation, she is a "Steam 05".
[Editor's Note: I finished the Suffolk last month, but am finally getting around to putting out pictures of her. I am very happy with this model, and will be buying more from Ironclad as time and finances allow. I am particularly fond of the looks of Steam 12, the aeronef, and Steam 14 for a German tank. Yes, I know it looks like an A7V, but I think it looks great. I also like the Steam 4 "Armoured Steam Carriage". I would fit it with a spar torpedo for a fast attack craft, possibly French?]
Posted by J Womack, Esq. at 10:59 PM 2 comments:

Have You Ever Noticed...

...that when you are away from your paints, minis, scalpels, bits, et cetera, you really, really get inspired to work on something? This is happening to me in a big way here in Minnesota. And blast it all, I have nothing to work with! And somehow, I don't think the memsahib is going to take it too kindly if I suggest a field trip to the arts and crafts and dollar stores to start a new kitbash.
But the Colonel and Dampfpanzerwagon's latest scratchbuilds have my juices flowing. I want to work on something!

The Colonel is at it Again! Again!

If you aren't a follower of the Colonel O'Truth telephonic interweb journal (what some Philistines refer to as a 'blog', I believe), you bally well should be! The work this paragon of British Progress has done in the last year is astonishing, and will most assuredly be rightly remembered in due course, with appropriate honors. the newest device is a two-legged armoured perambulator, which you can see in progress by following the linkage below.
Colonel O'Truth's Miniature Issues: Bazalgette Light Armoured Perambulatory Contrivanc...: Hi, All! Well, it's time for another bit of VSF nonsense. So without further ado, let me introduce: The Bazalgette Light Armoured Peram...
Posted by J Womack, Esq. at 10:29 PM No comments:

Despatch from the Colonel: The Generation Game

If you are a faithful reader of this journal, you should already know about the amazing work carried on by Colonel O'Truth. Though an Irishman rather than Scot (by his name), the good colonel has managed some amazing engineering successes, with his HMLS Gargantua, his smaller walker, and the new Faraday Galvanic Field Gun. If you do not already, you should certainly begin follwoing this enterprising madman's technical journals. A linkage can be found below, to the details for the power generating wagon for the Faraday Gun.
Colonel O'Truth's Miniature Issues: The Generation Game: Hi, All! Big Mike takes it all in his stride... I've been slogging away at the generator for the Faraday Galvanic Field Gun for the las...
Posted by J Womack, Esq. at 11:08 PM No comments:

I have always had trouble with sknitones. While searching about on TMP, I found a reference to this article on the subject from Cool Mini or Not (CMON). It covers a wide variety with Vallejo paint references.

I haven't used it yet, but I am ordering some paints to give the suggestions a shot.
Posted by J Womack, Esq. at 2:41 PM No comments:

The dastardly Hun has rockets! Primitive terror weapons, fit only for the bombardment of innocent civilian areas. Note the lack of any sort of guidance - obviously an inferior product to our British Precision Munitions, which strike only military targets with uncanny precision - 94% of the time! 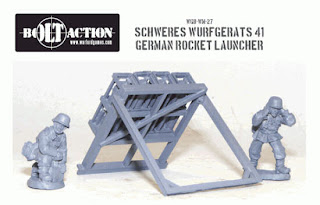 Notice on TMP
Of course, when the Imperial German Army unveiled this weapon, their spokesman - a Colonel Wilhelm Klink - claimed it was to be used "only in frontier areas, where the chance of harming innocents will be negligible, and the morale effects against indigenous tribesman would be maximized. For example, on Venus against the barbarian lizardmen." At least, that's what I think he said - the man's English was just not quite up to scratch, you see. Quite a thick accent.

[Editor's Notes: Although this is for 28mm WWII, I think that given suitable crew figures, it has a simple enough look to make it suitable for VSF. Big chunky rockets of death! Woohoo!]
Posted by J Womack, Esq. at 6:36 PM No comments:

ANNIVERSARY OF INDEPENDENCE
Texicans Declare Republic on This Date, 48 Years Ago

In 1836, a group of brave men met secretly in the small town of Washington-on-the-Brazos in what is now the Houston Province of the Republic of Texas. They signed a document which meant their deaths if captured by the Mexican Army, but liberty for their entire nation if their rebellion, like that of the American colonies before them, was successful.
Fellow residents of Victoria's Landing, please extend your congratulations to Texicans you meet today. In celebration, the Texican Consulate will be providing free 'barbecue' beef and beer to all residents of the city. His Excellency the Viceroy will be hosting a dinner and formal ball for the Texican Consul, Mister Andrew Jackson Houston, at Government House tonight.
Also, please do not be overly concerned by the sound of numerous gunshots coming from the Texican Quarter tonight. They are most likely the result of a few Texicans partaking a bit too heavily of the local spirits and celebrating their independence by firing revolvers into the air. Residents of the city are, therefore, encouraged to remain indoors after dark, to avoid accidental injury from falling bullets. Last year, two people and three Martians were injured by the 'lead rain.'
[Editor's Note: In our reality, this event did occur on March 2, 1836, at Washington-on-the-Brazos, Texas. Today is Texas' 176th birthday. Still the only independent nation to willingly join the Union, and probably the only one that ever will be. Oh, and the bit about people being injured by falling bullets? That happens every year on the Fourth of July and New Year's Eve. Happy Birthday, Texas!]
Posted by J Womack, Esq. at 10:02 AM 1 comment:

I hope you like leeks, as a good number of them will be served across the Empire today. Naturally, this is in honor of the Feast of Saint David, patron saint of Wales. The Welsh members of Her Majesty's valiant forces on guard here on the Red Planet will be hosting their fellows tonight in the mess.

Have a great Saint David's Day!
Posted by J Womack, Esq. at 9:48 AM No comments: