Gentlemen, I present to you incontrivertible photo-static evidence that Her Majesty's Government has begun experimentation with weapons of fantastic power... the Royal Artillery's Research and Development Field Testing Platoon. Or, at the very least, Lieutenant Hiram Goswalding and four members of his platoon. Can you hear the Hun tremble? As well he might! 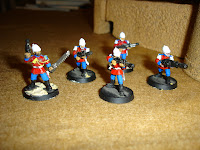 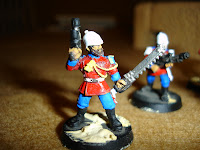 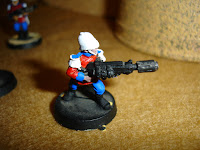 These fine young men are sporting an array of new weapons currently being tested for safety for operator and effectiveness against the enemies of our beloved Sovereign. Only in Britain can the likes of these fine brave lads be found, willing to test Electrorifles, Voltaic pistols, Chainswords, and Portable Flameguns with nothing but "very nearly certain its safe" assurances from the mad scientists who have created these weapons.
A round of applause for the lads, gentlemen!
Oh, and please drop a few quid into the hat as it passes. The photostat of young Corporal Fanningshire (pictured above, carrying the flamegun) was taken only moments before a catastrophic failure of the Bening Patent Igniter. He leaves behind a widow and three small children.
Posted by J Womack, Esq. at 5:17 PM