It turns out that Nat really likes making playing cards. He has another set on Kickstarter now that I am about to go back. This time, we are still 'steampunk', but the subject is PIRATES! This is perfect for anyone who likes the idea of airship pirates (Rob, I am talking to you!). Here's a sample picture. 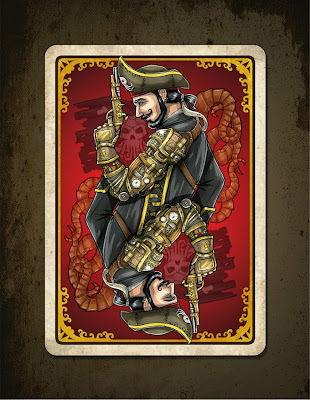 At any rate, you can find the project at this link: Steampunk Pirate Cards Kickstarter. We've already missed out on the Black Flag Limited Edition sets, with foil embossed cards and a special coin, which look pretty neat. And the Kickstarter is only three days old! But, I'll be sending him my $11 (includes US shipping) and hope that I see some pirates in me mailbox come Februarrrrry!
Posted by J Womack, Esq. at 8:47 AM