While perusing a certain auctioneer's location, I came across these interesting mechanickal pieces. They appear to be some sort of prosthetic devices for missing legs. 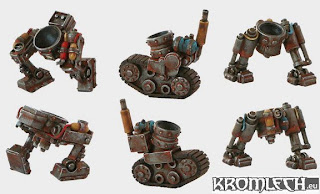 They appear to be of some unknown Eastern European manufacture, perhaps one of those small Balkan states, somewhere in the Hapsburg dominions? Although they appear rather crudely made to our British sensibilities, they have a certain rugged appearance that makes it seem they might still be serviceable.
Those interested in such things might look here for additional information.
[Editor's Note: I sort of wish I had a real use for these. Just $7.49 a set. Might get them to use in 15mm vehicular manufacture rahter than 28mm leg swaps, as I believe they are originally intended.]
Posted by J Womack, Esq. at 11:11 PM

I have a use for those legs. I have been looking for legs to use with a steam walker conversion.

I believe they were originally intended for 40K orks, yes. But they look great for steampunk projects like Eli is contemplating.

The only thing keepingm e from getting some and building the walkers is lack of any real use for such a thing.