The Huns Field a Tank!

Although British science and engineering admit no peers, it seems that the German Empire has finally fielded their first armoured vehicle. A crude design, naturally, but it might frighten the natives, or perhaps an unsteady Frenchman. Reportedly rather uncomfortable inside (hot and noisy), it does sport a rather effective Krupps gun and thick riveted plates of armour. I am certain that Her Majesty's valiant Tommies have nothing to fear, however. 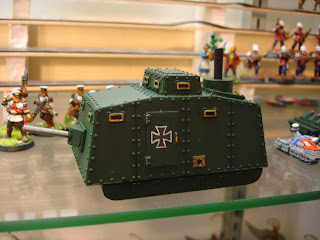 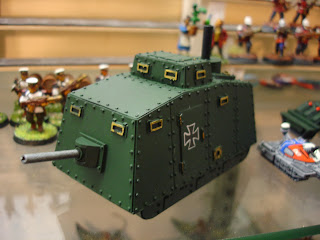 [Editor's Note: This is an Ironclad Steam Tank, although I forget exactly which of their models it is off the top of my head. Perhaps Steam 7? I purchased it at Historicon over the summer, and just got around to painting it up. I think the green looks rather nice. I considered some splinter camouflage, but decided against it (obviously). Some projects finally moving ahead!]
Posted by J Womack, Esq. at 6:00 AM

Nice looking tank - it looks just like an A7V should. I think plain field grey looks good on these beasts. Best, Dean

A splendid looking 'Tin Can' Sir.Those cunning Germans are getting a bit big for their boot!

Nice to see Green instead of battleship grey for a change.

Is it an Ironclad minis resin?

Lovely job! I've been eyeing this off myself. Are the top hatches fixed closed or can you model them open with a Commander figure?

Its Steam Tank 17 which you can find here:
http://www.ironcladminiatures.co.uk/shop/article_steam13/Steam-13.html

It is, indeed, an Ironclads resin steam tank.

I chose it for the Germans because of its resemblance to the A7V.

I chose the dark green because I already have the British tank in a grey scheme. I considered a splinter camouflage scheme as well, but kept it simple.

The top hatches are fixed closed. I don't have a commander figure for it right now, and didn't want to risk losing the hatches or anything. Plus, I just wanted to finish it.

I have one more tank that I bought for the French. It will get a blue-gray paint scheme, eventually.