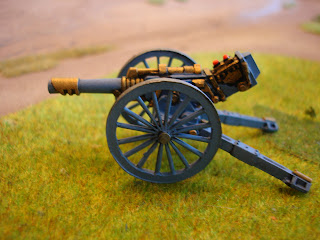 
The above pictured weapon was seen by our intrepid reporters and loyal agents of the Crown as it was displayed for the German Imperial General Staff. Developed by the nefarious KFG (Kaiserlich Forshcungsanstalt fur Geheimewaffen (KFG), or Imperial Research Institute for Secret Weapons), this device focuses an intense beam of energy at a vast range. Thankfully, its destructive powers are limited to a direct line of sight! It is powered by an interchangeable galvanic storage unit mounted at the rear. A trained crew is supposedly able to exchange a depleted unit for a charged one in a matter of moments, at roughly the same speed as the loading of a conventional breechloading cannon.
One can only hope that this new and dangerous development does not presage an aggressive move on the part of the German Empire.
[Editor's Notes: Obviously, this is an old GW lascannon. The big difference is the wheels. I got these from Nic at Eureka Miniatures (Thanks, Nic!) about two years ago. Or was it three? Any rate, I finally got around to painting it and putting it all together. I think it came out splendidly. The name, by the way, is supposed to mean "The Bright Lance Cannon, Model 1888). Now, if I could only find the crew for it, I had them here somewhere...]
Posted by J Womack, Esq. at 3:45 PM

Splendid you should use those splendid gals from Hinterland Miniatures for the crew, I am in the process of building something similar for Mars/other planets and I will be using your ideas here (thanks) for my ordnance (got to love the bits box full of Evil Empire plastic 40K bits 8») Keep up the good work and cheers.