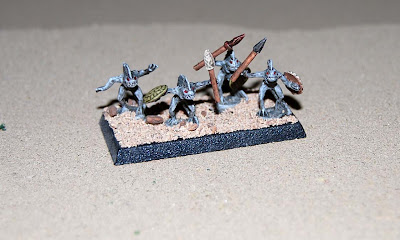 Rebel Minis just announced it's 15mm Deep Ones and though they certainly would work as such, their armament and long tails make them equally and perhaps better suited as yet another denizen of the jungle World of Venus. While they could be used as just another race of lizard men, I came up with a cool idea of them being some sort of swamp dwelling species that would be feared by all - the fin men. 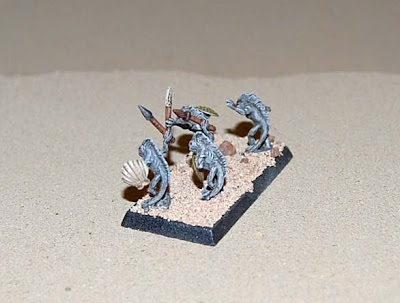 Fin men would be a species of Venusians that would dwell in the murky water, their pale grey flesh melding them into the silt and muck, rendering them invisible to all bu the keenest eye. They would prey on the other beings of the jungle world, ambushing them when they ventured to close to the water's edge, taking them with club, claw and their long, jagged, snaring teeth. When fighting in force, it would be in the form of raiding parties, slipping through the dark jungles at night, pouncing on unsuspecting settlements and dragging their victims back to a certain doom beneath the quiet surface of the gloaming marshes and mires.

Nice figures. I like it when you can use more models in a game by a little background description.

Thanks for dropping in, Eli! It's been a while.

I saw these minis come up a few days ago on TMP. I had similar thoughts, but I have so many lizardmen types already...

There is always room for more!

Throw them in as allies for one of the other of your Venusian factions.