As the pre-eminent news source for Her Majesty's subjects here on Mars, we are constantly on the watch for developments which may affect the Empire and its subjects. As such, guardians of the Rights of Englishmen that we are, we feel it needful to point out that Her Majesty's forces have produced a new sort of armoured landship. 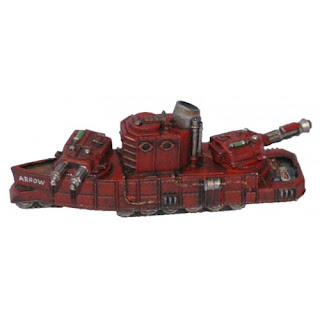 Fitted with a set of rotating tracks upon which it easily and swiftly traverses the rough sands of Mars, the 50' long armoured leviathan also mounts an array of artillery and reciprocating cannon that are sure to daunt even the hardiest opponents of Her Majesty's rightful claims.

The Colour Sergeant agrees: "Right, you lot, now we follow those lads in the big tin can, and next thing, we're at it with the Hun. They won't like it up 'em!"
[Editor's Note: The model at the top is newly released by a new (?) company that has just started making 10mm VSF. The company is Troublemaker Games, and the models come at 6 to the pack. Each is 55mm long, according to the description here. I'm considering using them in my 6mm VSF project as even bigger landships.]
Posted by J Womack, Esq. at 6:25 PM

Do you think these would work with 10mm forces?

They are supposed to be scaled for 10mm, according to the manufacturer.