As you can see, I found the old templates, and reset the blog. Much better looking, I think.

I'll be splitting postings on Historicon between this blog and my other, The Scattergun Gamer, so I don't flood either one too badly. Plus, it makes for good cross-pollinating! Be sure to check for stuff on the other blog.
Historicon, Day One (Thursday, July 8)
Battle of Edgehill
15mm ECW, "Declare Thee, Sir!" rules.
Pike and Shotte is the theme for this year's Historicon, so I thought I would start off the convention with a stab at a new genre and a new rules set on Thursday night. I was given command of the far left flank of the Parliamentarian forces, as General Sir James Ramsey (a historical leader). 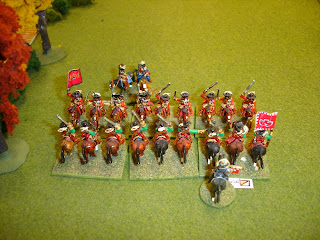 Things Get Hot!
The first contact I had with the enemy, the King's Lifeguard Regiment of Cavalry charged into my own cavalry. I held my own, and the Lifeguard retreated! In the retreat, I caught up to two (of three) bases of the enemy cavalry. This does not eliminate a base under these rules, but causes them to continue to rout further. I pursued further, but came into contact with another unit of Royalist cavalry, the Prince of Wales' Own. 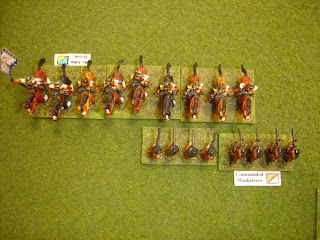 The Prince of Wales' Own misses charging my musketeers by thaaaat much.
Things then began to go down hill. On the right, the cavalry overextended and got slaughtered. The infantry refused to move forward (the player's choice - bad call) to support them. The Parliamentarian right flank began to collapse. In addition, the leader of the battle between my left flank and the center was killed by shot from a saker, causing his battles to go to pieces rapidly. 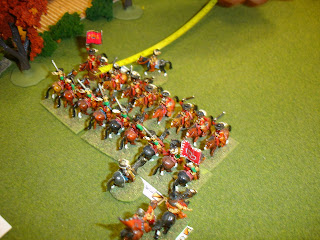 Royalists on the left, Parliament on the right... the Royalists will win this battle. 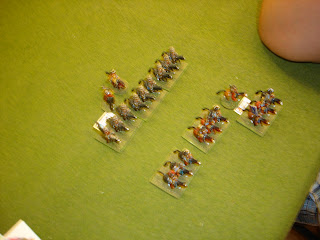 My cavalry routs off the table, pursued by Prince Rupert's.
My cavalry was chased from the table, leaving me with only a general and two seperated units of musketeers. Musketeers, I might add, who were entirely ineffectual, even at point blank range. Out of 30+ rolls, I rolled one hit. One. You needed a 7 on 2d6. Not 7+, not 7-, a total of 7. 1 in 6 chance on 2d6 to get that total. Not for me, it isn't. I rolled snake eyes twice and boxcars three times, but only one 7 (3/4, if you're interested). At that point, Sir Ramsey surrendered to the advancing Royalists, throwing himself on the King's Mercy.
To be honest, I didn't enjoy this game. My direct opponent liked to gloat, the fellow immediately to my right was obnoxious, and I was accused of cheating (by the Gloater) when I made a mistake because I misunderstood a rule. The rules themselves were not easy for me to follow - a bit counter-intuitive. While I think they might have modeled the infantry fighting of the period well, I didn't have enough infantry to tell. The pursuit rules fairly ensure that if you rout your enemy, your own cavalry will follow them off the table. Which may be historically accurate, but it sucks on the game table. I'll not give up on the period, but I don't think these rules are for me. 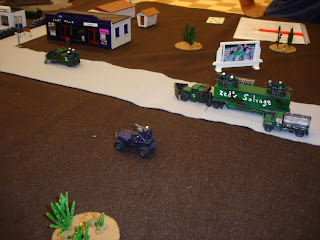 A true example of a game being wrecked by Bad Gamesmanship. Too bad, really. I've enjoyed myself with fun people even when the rules themselves weren't all that easy to follow (as have a lot of other gamers, I'm sure); I look forward to a better report soon!

Played the same game but in the Thursday afternoon session. I ran the Royalist center.

I too found the rules very counter intuitive - sevens for muskets or very high roll (10 or 11+) and artillery hit on doubles - Why the different mechanic? The game also suffered from poor play aids.

Two out of the seven players drifted away before games end. Most struggled with the rules throughout.

The minis were quite nice, I must agree. Sadly, the rules were not up to it (the ECW). The post-apoc had some cool minis that I am after now. Because what I need is another project.