History
The origin of the Research and Development Platoon of the Royal Artillery is shrouded in secrecy. It is thought that Her Majesty's Government began a secret program of technological development in the years immediately after the Russian War. Evidence for this lies in the budgetary increases to the Royal Artillery passed by Parliament at the urging of the Prime Minister and the Horse Guards. The precise nature of the expenditures is listed merely as 'Confidential.'

It is certain that the public first became aware of the Research and Development Platoon (RDP) in the spring of 1866. Every Londoner remembers that spring, of course: the rampaging dinosaurs through Hyde Park would be impossible for anyone to forget! Cnventional rifles failed to bring down the largest beasts, and conventional artillery was considered too indiscriminate to use in the midst of London's better residences. Quite right, too, as the home of none other than Sir Reginald himself is in that district! I digress. Conventional weapons being unsuitable, Her Majesty personally demanded the newly developed weapons be employed against the great monsters. One squad of electrorifle armed soldiers laid the beast low, and Lieutenant Hiram Goswalding removed the head with his chainsword. Suitably mounted by the taxidermist's arts, the head now rests as a trophy above the RDP's wardroom fireplace.

Combat History
Other than the Hyde Park Dinosaur Incident, the RDP has primarily seen service in the off-world colonies. It took part in the Ikora Pacification, the Defense of Victoria Landing, and the Second Galfor War. There have also been numerous skirmishes with natives of both Mars and Venus. The most famous of these minor actions has been the Retreat to Aphrodite on Venus, where the First Squad of the RDP acted as rearguard against a horde of the native lizardfolk. Sergeant John Cooper distinguished himself by killing the horde's warchief as the brute tried to ride down a wounded Tommy. A single shot from his Caloric Ray Emitter burst the warchief's chest in a gory spectacle of Imperial bravery and technology's superiority over native cunning and ferocity. 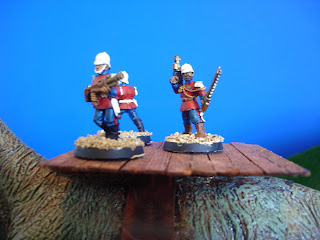 Lieutenant Goswalding and two privates of the RDP, atop "Bessie", a draft bronto on Venus 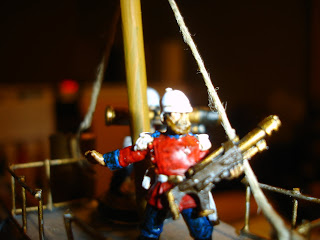 The RDP wears a uniform similar to the standard British infantryman of a Royal regiment: red woolen tunic with blue facings, white fringe on the epaulettes, and dark blue trousers with red seams. The cut of the tunic is different from the standard British issue, being double breasted and buttoning on the right hand side. Black boots (officers wear brown) and white equipment and sun helmet, with brass fittings to all. Officers wear brown leather equipment and a gold aguilette on the left shoulder is common.

Weaponry varies, but the 'standard' longarm for the RDP is the Johnson Patent Electrorifle. Officers carry a Grenville Voltaic Pistol and have their preference of Benson Vibrating Sword or the 1871 Jamison Pattern Chainsword. Other weapons include the Caloric Ray Emitter, patented by Prof. K. Blooie, the Bening Pattern Flamegun, and the Man Portable Hale's Rocket Launcher.

I think this is a great interpretation of the GW Praetorians. The lasguns paint up nicely as VSF weapons.

Yep. One of the things I like about the GW Guard stuff is it has a nice chunky, rugged look to it. So I just paint 'em in brown and brass and you get VSF-y goodness.

I may do a version of Jane's for VSF weaponry as well, kinda like the Reginald's. That might be fun, huh?