First Victoria Landing Foot (Sepoy)
History
The First Victoria Landing Foot (Sepoy) regiment was established by the Horse Guards on June 12, 1871, to provide native troops for the protection of the British Martian Crown Colony. Costs to send entire regiments of human troops were prohibitive, even using Royal Ether Navy craft for the majority of the ferrying duties. Increasing agitation from native groups, other European powers, and Feral Martian brigands were threatening the young colony, which still amounted only to a single large town and several outlying villages and outposts.
The primary British settlement at that date was Victoria Landing, and volunteers from the natives of that region were solicited. Indeed, so many volunteers were received that the British officers and Senior NCOs of the newly formed regiment could pick and choose amongst them, a novel practice, as the Army often had difficulty maintaining regimental strength from new recruits in European units. The resulting high quality of the recruits began a tradition of the First Victoria's elite status in the Crown Colony.
The 1st VL Foot saw action for the first time in the Defense of Fort Edward, the small outpost which protected the canal bridging point nearest to Victoria Landing. The town was warned of an impending attack by Feral Martians at sunrise on April 14 with only hours to prepare. 2nd Platoon, 4th Company drove off a determined aerial assault. Credit was given to the quick thinking of Private Hissha Tundal for stringing netting from nearby fishing vessels over the open areas of the garrison post. This prevented a direct flying assault into the compound, quite canceling the Ferals' primary advantage. Mentioned in despatches, Private Thundal was promoted to corporal, the first Martian subject to achieve an NCO's distinction.
Other campaigns of note have included the 1st VL Foot. The entire regiment took part in the Ikora Pacification, the 1st and 2nd Galfor Wars, and the Defense of Victoria Landing. Elements of the regiment participated in many other skirmishes and campaigns, including the First and Second Battles of Ghola, numerous convoys of strategic materials, and the Fenian Riot of 1779. 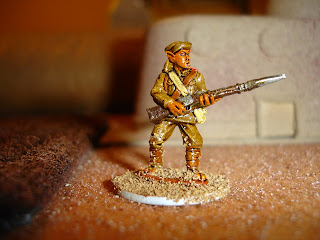 Private Ghelee, 1st VL Foot, at the ready. Photostat is taken from Ikora Pacification Campaign
Uniform
The uniform of the typical private in the First Victoria (shown above) is a dark khaki blouse and trousers, with matching turban. Native red leather (from the ghurr, a large domestic beast similar to an Earthly oxen) is used for puttees, Martian boots (more like sandals), and carrying equipment. A canvas or musette bag is slung over the right shoulder, for carrying foodstuffs. The 1st VL Foot has red epaulettes as distinguishing regimental marks. The private is armed with a breechloading Martini-Henry rifle and bayonet.
Posted by J Womack, Esq. at 8:12 PM

Awesome write-up! I didn't expect you to move on the idea this soon. Looking forward to more.

This is very well thought out. I like the Fenian riot especially. Good job with the conversion!

Eli: I cheated. It's an old photo. But it was such a good idea, I didn't want to wait on it.

General: Thanks! The mini is a straight from the mold RAFM Martian sepoy for Space 1889. All I did was paint it up.

I didn't expect new pics. The whole point was to show off some of the work you have done. I look forward to the next installment of RRR.