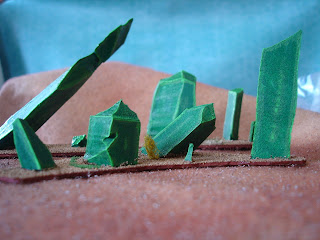 Thrilling news, good readers!
It seems that the astonishing handwavium crystals (seen in the photostat above) have been found by Earthmen for the first time. These massive crystals can be induced to provide vast amounts of heat and light when subjected to the proper chemical baths, without requiring any oxygen at all! Imagine a boiler 'fired' by a chunk of handwavium the size of your head, and powerful enough to move a fully laden train! And it is consumed so slowly that it could last for over a year with no appreciative loss in function.
Truly, we live in an age of Marvels!
Naturally, the Colliers' Association of Britain has demonstrated against its use. Spokesman Darrel McTaggart of the CAB is quoted in the Times, "It would be a terrible error to put all of our faith in this potentially hazardous, and completely alien technology, while allowing good, Earthly coal mines to go unworked and unprofitable."
The deposits are found in a desolate area near Nova Roma, the recently Catholicized Martian city-state. The crystals grow right out of the ground, making 'mining' of them anincredibly simple task, except for one thing: the yellow floss spore plant. You may see in the photostat a small bush near one of the crystals. This is a yellow floss spore plant. Its spores, which are released with the slightest contact or even in a good stiff breeze, are highly toxic to Earthmen. Martian animals eat the stuff as if it were cotton candy. The yellow floss spore plant is supposed to be common in areas of handwavium, even in the underground caverns where Martian miners have been excavating small nuggets of handwavium for millennia.
Naturally, Her Majesty's Government is keen to gain access to these incredibly valuable deposits. Combined with the recent hydrium discoveries, it could truly revolutionize how aeroships and aetherships operate. There has been no official word out of Nova Roma as to the willingness of the Prince - or the Vatican - to trade in this vital substance. It is the sincere hope of this journal that the Prince, Bishop, or whomever is in charge of affairs of state and trade for the State of Nova Roma will be of an enlightened viewpoint in regards to this material.
[Editor's Note: The handwavium is chunks of pink foam cut in vaguely crystalline shapes, and then glued ot thin plywood bases and painted with a variety of paints, including Vallejo Model Colors and cheap craft paints (for the bases). I made them late last night when inspiration struck me. I call it handwavium because, well, I liked the word when i saw it used on TMP and it does sort of just wave a hand in the face of critics who start discussing how it is impossible to work because of laws of physics and chemistry. I am also planning on making some 'unobtainite ore' for Venus, which appears much like a blue granite, but has strange properties when exposed to an electrical current...]
Posted by J Womack, Esq. at 4:44 PM

Excellent and so simple. Great stuff there. I love words like handwavium and unobtanium.

I, too, am (obviously) fond of such terms. THough, to be pedantic, I am calling it "Unobtainite", not "unobtainium."

The same sort of thing can be applied to the naming of anything with a lofty sounding name. We once named Royal Navy ships in a pirate game like this, giving them names like HMS Incalculable, Inplausable, Unthinkable, Undeliverable, etc.